The power of sound to generate electricity 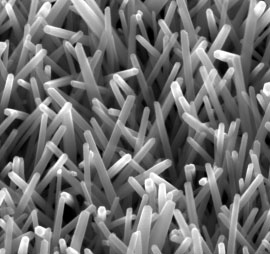 The sounds of cars passing, people talking, even a heart beating can all be picked up by one of Dr Joe Briscoe and Dr Steve Dunn’s ‘nano-generators’, and in turn, generate an electrical charge. “In fact they love the sound of AC/DC”, says Steve.

The idea of harnessing sound is just one of a number of smart solutions to our increasing demand for renewable energy sources.

“Although this technology is unlikely to replace large power stations, it has many possible niche applications” Joe explains. “A version of the generator could be used in medical appliances such as pacemakers where there is no natural power source, but the heart beat is a more or less continuous vibration.”

The generators could also be used to power advertising on trains and busses; or as safety sensors able to detect approaching footsteps.

Developing the next generation of nano-generators

The technology that makes it possible to harvest sound and vibrations has existed for some time, but this joint QM / NPL project has allowed for a significant improvement on previous devices.

The team have created nano-generators formed of nanostructured zinc oxide rods – one 1x2cm generator case contains billions of rods. Zinc oxide has piezo-electric properties, so applying pressure of any sort, such as shaking the rods, generates an electrical charge.

The zinc oxide nanorods can be grown on many different surfaces – such as paper, fabric and plastic. This makes for a valuable flexibility in the end product – it doesn’t have to stay in one shape to be effective.

The nanorods are currently manufactured in a hot oven in the lab, but the manufacturing process could easily be scaled up. “It should be possible to create a large roll of ‘nanorod coated material’ using a similar process to that used to make foil covered potato crisp packets,” says Steve.

“The relationship between QM and NPL is very much an active and exciting collaboration,” says Steve. “QM brings expertise and the capacity to build prototypes for testing; while NPL shares scientific know-how and excellent measuring capabilities.”

Being able to very precisely measure the output of the nano-generators makes it possible to accurately assess their energy harvesting potential.

NPL has also fed in to the process of developing the generators using various techniques – active rectification and scaling for nanorectification – to improve their overall performance.

The project has led to further research in this area: one PhD student will be investigating a new model proposed by Joe to explain the function of the p-n junction in the ‘nano-generator’; and a second PhD student will be refining the generator itself, working out how to make it even more effective. Funding for both PhDs is coming from NPL, and Joe will be supervising both projects.

The project has led to conference presentations and publication of a paper in Advanced Energy Materials.