The power of political oratory 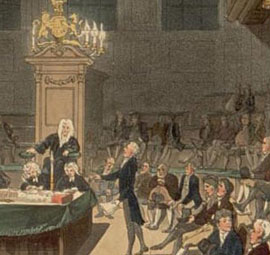 Invested with the power to persuade, transform and impress, public speaking is one of the most important skills for a politician to master. A successful speech will not only touch the audience emotionally, and possibly even change their minds, but it may also translate into electoral votes.

Dr Chris Reid is fascinated by the way that eighteenth century politicians used rhetoric, and in particular how speakers and speeches changed as they became more widely reported outside parliament.

A study of speaking practices in the House of Commons from 1760 to 1800 by Chris Reid is due to be published by Oxford University Press in late 2012.

The rise of political reporting

Parliamentary proceedings – especially the content of political speeches and debates – were not deemed to be suitable for public consumption before the late eighteenth century. Accounts of parliamentary speeches were not published widely, and when they were, it was in small circulation newsletters and pamphlets, as well as MPs diaries. In 1771 the House of Commons attempted to suppress printing of parliamentary speeches altogether, but the attempt failed, and subsequently the publication of debates was tolerated by the authorities.

Such was the public interest in the workings of parliament that the parliamentary news became a major selling point in 18th century newspapers. Details of politicians speeches would sometimes take up over half of the paper (two folio pages out of four). Orators complained that the accounts varied according to the political persuasion of the editor.

Chris Reid is fascinated by the way that the public image of the orator changed as the audience for parliamentary speeches became broader. “With greater publication of speeches, the speaker was no longer simply addressing parliament and the house –they were also addressing the wider public,” he says. “You can see the shift in focus in the style and  content of speeches.”

“Some politicians grew wise to what was happening and deliberately made an effort to make favourable relationships with reporters. In many ways this foreshadowed how politicians use the media to their advantage today.”

The art of recording a speech

Politicians did not read from scripts when speaking in parliament in the eighteenth century, it was considered ‘ungentlemanly’ to do so. Instead they would address their audiences at length, often for an hour or more. By necessity, newspaper reports of these speeches left out a great deal of what was said.

“I became very interested in what it means to report,” Chris says. “It is certainly not a mechanical process, there’s an amount of creativity and unconscious editing at play.

Lord John Campbell (a 19th century liberal politician who began his career as a parliamentary reporter) made the point that even if one had fast enough shorthand to note everything said verbatim, then the resulting transcript would not be an ‘authentic’ representation of the speech as an event. That’s because written reports tend to highlight verbal inaccuracies that may, on listening, simply have been tuned out. They cannot recapture a performance.

On the drawbacks of studying 18th century speeches

“One of the limitations about studying historical political oratory is that you are so far removed from all the elements that make up a good and impressive speech – the speaker’s presence, their voice, the physical pausing and spacing,” says Chris.

“But spending time with the texts and manuscripts was still an intriguing experience. In some cases it was striking how the rhetoric would simply fly off the page, and you could imagine the original power of the speaker.”

It’s not just the fact that contemporary politicians deliver carefully scripted speeches rather than rely on their memory and inventiveness that has changed since the 18th century. So has the way that the public consume information about parliamentary affairs.

“Today we have complete transcripts of parliamentary proceedings with Hansard and even a parliamentary channel – but how many people use these resources? Most likely a very small percentage of the general public. With all the general din of news and cultural overload it’s become increasingly preferable to tune out parliamentary politics, but to do so is dangerous,” Chris says.

Chris will be focusing on ‘Prime Minister’s Questions’ in some of his future research, looking at the role it plays in our general understanding of parliamentary politics. But he will also continue to explore 18th century politics. He is investigating the work of William Windham, one of Edmund Burke’s disciples.

“I’m particularly interested in conservative outsiders,” he explains “because they have to work so much harder to become accepted by the establishment. One of the ways they can do this is by honing their speaking skills in order to really make their mark. Their position on the social margins of power gives them unusual insights into the political process.”