The changing sound of society

Professor Jenny Cheshire tunes into the new sounds of English 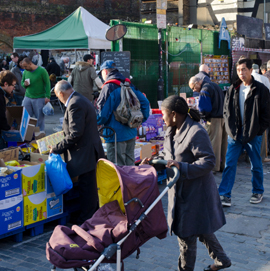 An overheard snippet of conversation like this offers a wealth of information for Professor Jenny Cheshire. The changing dialects of spoken English have formed the focus of her research, offering a unique perspective on how our society is constantly evolving.

Where many languages meet

London has long been a destination for immigrants. Generations of new arrivals have settled in the city and made it theirs. The offspring of these arrivals, second-generation British-born children, grow up speaking English. Sometimes as their first language, and sometimes as their second or third. First language or not, at school and with their friends, they most likely speak English.

“And yet something interesting is happening to the English spoken by these groups of people. We’re noticing new forms – new sentence structures as well as new words,” explains Jenny Cheshire.

Jenny has been involved in a series of research projects have explored this phenomenon in depth. One study compared the language used by teenagers in Havering (an outer London borough) and in Hackney (an inner London borough known for its multicultural mix.)

Only a few miles separate Havering from Hackney, yet culturally speaking they are distinct. Hackney is home to people from a huge range of countries – including Ghana, Nigeria, India, Pakistan, Bangladesh, Turkey, Greece, Jamaica, Morrocco, Cyprus, China, Vietnam, and Brazil; whereas Havering is more of a monoculture.

The research team analysed over 100 hours of teenage conversation, and discovered some interesting sentence structures emerging in Hackney. Some of these are influenced by speakers’ first languages, and then adopted by their friends.

For example, in Hackney teenagers are using ‘who’ in sentences such as, “The boy who I was talking about”, when they want the boy to be the topic of the conversation. If they are simply mentioning the boy, they are more likely to say ‘that’ – “the boy that I was talking about” – or simply drop the ‘who’ or that’ altogether. However, in Havering the ‘who’ is not used in this way.

Arabic and English-based Creoles are just some of the languages that use topic markers such as ‘who’ in the example above. It seems as if Hackney’s teenagers are co-opting the structure and using it in English.

“Teenagers are a real force for language change as they want to differentiate themselves from their elders,” comments Professor David Adger who was also involved in this research.

“I believe these changes are a real measure of social integration,” adds Jenny. “The language is reflecting a true melding of cultures.”

“Teenagers are notoriously changeable in their likes and dislikes – slang words go in and out of fashion very quickly. The real test will be how long these new structures stick around,” says Jenny.

“What’s interesting though, is that when we analysed conversations between younger children – five-, eight-, and twelve-year olds – many of the same structures were being used.”

Another linked project is comparing the language of Londoners with that of Parisians who live in ethnically mixed areas similar to Hackney. Jenny Cheshire is co-investigator of the large scale study, “Multi-cultural London: English, Multi-cultural Paris: France”, together with Colleagues at Birkbeck College, University of London and Université Paris Ouest Nanterre. See more about this project on the Birkbeck website.

Initial findings show that the same kinds of structures and forms are emerging in Paris, mirroring developments in London.

Keeping up with the latest linguistics research

Jenny has developed a research digest blog together with other colleagues in the Linguistics department.

The latest findings are written up in an engaging and accessible format – recent articles consider the language used to describe the current economic crisis, the widespread and curious use of ‘you’ in place of ‘I’, and how men and women use different language to make an impact in the boardroom. See: http://linguistics-research-digest.blogspot.com