The biology of sexual attraction 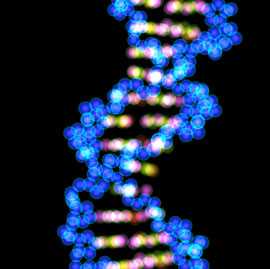 The biological basis for some human behavioural traits – such as sexual orientation – is an area that has divided opinion for decades. Coming up with conclusive scientific evidence for the part that nature plays in the nature versus nurture debate could have a real impact on how society, in its broadest sense, views homosexuality.

Dr Qazi Rahman is one of the leading scientists in this field. As a psychologist based in the School of Biological and Chemical Sciences, Qazi Rahman’s research explores the biology behind sexual preference.

Establishing the basis for sexual orientation

Qazi Rahman’s work has explored the many different aspects of sexual identity- taking the seemingly simple question – ‘what is sexual orientation?’ – as his starting point. He explains, “I look at what it is that humans orientate towards. Evolutionary theory suggests we should be attracted to those things that are ‘biologically relevant’. So I want to know which aspects of the face or body are the focus of sexual attention. And what are the cognitive implications of that attraction, what is going on in the brain?”

Rather than using brain scanning technology, Qazi Rahman and his team administer survey-based research, as well as sophisticated psychological tests that measure things like facial recognition and physiological reactions.

Current projects include the investigation of genetic and environmental determinants of sexual orientation, how sexual orientation impacts spatial awareness and memory (which involves navigating and finding important objects in the environment), how the brain organises our attention so we literally “can’t take our eyes off” someone we find attractive, and how our physicality (eg, face and body) influences the judgments others make about our sexuality and gender identity.

In the UK there is more widespread societal acceptance of homosexuality than ever before – from the legalisation of adoption and same-sex civil partnerships (soon to be same sex marriage) to the repeal of section 28 (a law that prohibited any ‘active promotion’ of homosexuality). Yet discrimination still exists. And in other parts of the World homosexuality is still regarded as a crime that can be punishable by death.

Qazi Rahman’s work has established a fairly secure basis for biological basis of sexuality, but what this means in terms of wider societal impact is complex. He says, “I often get one of three responses when I give public lectures: 1) does this mean homosexuality can be described as a disease? 2) If genes are responsible would this make it easy to eliminate all gay people? 3) What difference does it make if homosexuality is biologically determined or not?”

“I think points one and two are fairly easy to answer – no, it is a trait not a disease, and no, genes seem to account for only 30 per cent of sexual orientation – but the answer to the third question is much more complex.”

“After all, the biological basis for homosexuality can be used by those both for and against widespread acceptance of the LGBT community. In some Arab countries for example, it is already believed that people are ‘born gay’ that it’s not something they become. Yet alongside this belief is the expectation that that individual should grow out of it – that it is a “challenge” that God has given you and you must get over it.”

“However, other survey research indicates that generally speaking, people are less likely to be prejudiced against something they perceive to be biologically determined, for example, a tendency towards obesity.” Qazi Rahman concludes: “For this reason I think it’s important to establish a firm scientific basis for sexual orientation. ”

The psychological pressures of being in a “biological minority”

Establishing the exact percentage of people who identify as gay and lesbian is notoriously hard for a number of reasons, chief among them being the fact that the information is not publicly available. People need to be asked, and asked in such a way that builds up a consistent data.

A UK Government survey conducted in 2005 put the number of British gay people at £3.6m, around six per cent of the total population or one in 16.66 people. (Guardian: http://www.guardian.co.uk/uk/2005/dec/11/gayrights.immigrationpolicy)

Qazi Rahman thinks the percentage is even lower based on his review of sophisticated national probability surveys, “It’s around four per cent. And of course in smaller populations it may be an even lower percentage still. There are many reasons why it is hard to define exact numbers, such as whether you are asking people about their sexual feelings, the number of sexual partners they have had or simply what label they prefer to use. The reason for such fluctuations are not yet clear.”

Whatever the actual numbers, there is no doubt that the LGBT population is in the minority. This might explain, in part, the higher rates of psychiatric morbidity in the LGBT population. “The minority stress model posits that actual discrimination, internalized homophobia or expectations of being maltreated are powerful stressors on non-heterosexual individuals, resulting in poorer mental health.” (Psychiatric morbidity associated with same-sex sexual behaviour: influence of minority stress and familial factors, T Frisell, P Lichtenstein, Q Rahman, N Langstrom, Psychological Medicine, http://qmro.qmul.ac.uk/jspui/handle/123456789/1091)

With collaborators in Sweden, Qazi Rahman questioned the ‘minority stress’ assumption in a piece of research using data from a large-scale twin study. He was particularly interested in the role played by familial (genetic or environmental) factors.

The results were interesting. While homosexual participants showed higher rates of psychiatric morbidity than their heterosexual counterparts, when the results were adjusted for perceived discrimination and hate crime victimization, the risk was substantially lowered. The risk was further reduced and even eliminated when the results were controlled for genetic and environmental factors. The results suggest that minority stress alone does not account for the higher rates of psychiatric ill-health suffered by the LGBT community, and that this is an area that needs more research.