Searching for cures for dementia 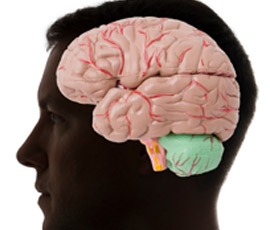 “All the thoughts, memories, joys and fears that I had ever experienced were, I believed, archived in the synaptic filigree of that organ [the brain]. But how, if at all, were they inscribed into the architecture of the grey matter itself? What is the relationship between ‘self’ (biological or psychic) and identity? What is ‘me’ anyway? In what does my identity reside? My body, my mind – or perhaps just my history?”   (Mind over Matter, Bronwyn Parry and Ania Dabrowska, Practice + Theory, 2011, p26)

Dr Bronwyn Parry took a journey that led her from the ‘brain bank’ at Addenbrooke’s Hospital, Cambridge to the homes of twelve people who have prospectively agreed to be brain donors.

Bronwyn collaborated with artist Ania Dabrowska to explore and capture some of the realities, ethical issues and aspirations surrounding brain donation.

Funded by the Wellcome Trust, the Mind over Matter project has been exhibited in Shoreditch Town Hall (October 2011) and the Wellcome Collection galleries (March – June 2012).

The public response to organ donation

Many people feel squeamish about donating their organs for research after their death. The Alder Hey scandal – where it was discovered that the organs of patients who had died in surgery were routinely kept by teaching hospitals without the family’s consent – did little to improve the image of donation.

As Bronwyn writes in her book, Mind over Matter, “Repulsed by the tabloids’ visions and narratives of body-snatching, mutilation and abject misuse or underuse of retained organs prospective donors turned away.” (Mind over Matter, p21)

The critical need for brain research

However, the numbers of people suffering from dementia are huge – and set to grow with an ageing population. Yet the amounts of money spent on research into treatment and causes is much less than it is for other medical conditions.

The commodification of human organs

An economic and cultural geographer, Bronwyn Parry first became interested in the economic, social and ethical issues around the collection of biotech samples from plants; these were harvested in developing countries by US pharmaceutical companies in the development of new drugs. This is the subject of her first book, Trading the Genome: Investigating the Commodification of Bio-information published by Columbia University Press in 2004.

The Mind over Matter project

The Wellcome Trust funded her exploration of brain donation, starting with a visit to the Brain Bank at Addenbrooke’s Hospital in Cambridge. Bronwyn says: “the domesticity surprised me, some samples are kept in chest freezers like those that sausages are kept in. Tools range from the very high-tech to the ordinary bread knife used to slice up the brain.”

Bronwyn also formed relationships with twelve prospective brain donors, getting to know them through a series of interviews included in Mind over Matter alongside portraits and other images by Ania Dabrowska. The book is both a documentation of the individual donors and a meditation on the wider issues at stake.

As Bronwyn says, “it’s my intention that the Mind over Matter project will help to demystify the process by putting a face to the donors, making a persuasive case for organ donation.”