Language holds the key to a disappearing culture 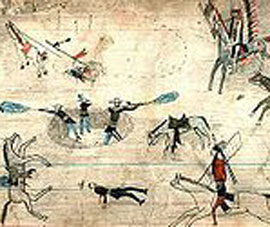 A Kiowa ledger drawing possibly depicting the Buffalo Wallow battle in 1874, a fight between Southern Plains Indians and the US Army during the Red River War (Source: Wikipedia)

Professor David Adger, Dr Daniel Harbour and Professor Laurel J Watkins worked with some of the few remaining speakers of Kiowa. Studying the syntax and stories of this language, the team shed light on one of the least documented Native American language families.

“At first glance, Kiowa looks anarchic”, says Dr Daniel Harbour, fieldworker with Watkins, on the project. “Words go in almost any order without changing the meaning. But we found that speakers use this freedom systematically to mark out the stages of a story.”

“And,” Professor Adger interjects “where speakers place words in a sentence depends on what they think their listeners know.  This means that the grammar of Kiowa is peculiarly sensitive to discourse in a way that is much less true for English.”

“Or even German or Russian,” adds Harbour.

Noam Chomsky, interviewed by Professor Adger at a special QM event in 2011, views language as the mirror of the mind.  “By studying the properties of natural languages, their structure, organisation, and use, we may hope to learn something about human nature; something significant,” he writes.

The Linguistics Department at Queen Mary works on the wide range of topics mentioned by Chomsky, from the structure of language in the mind to its use in culture and society.  The Kiowa project spans the breadth of this range.  It started with a quite technical question about syntax in Kiowa but has led to a deep understanding of a fundamental aspect of Kiowa culture, namely, its rich oral literature.

Understanding how the Kiowa language works

“Working on the syntax and semantics of languages of which one is not a native speaker, or even a frequent speaker, is, to put it mildly, a challenge.” (Mirrors and Microparameters, David Adger, Daniel Harbour and Laurel J Watkins, Cambridge University Press, 2009)

The research was carried out in teams: an elder, the fieldworkers, and one or more younger Kiowas. Work on language structure alternated with story and vocabulary documentation, stirring memories of the elders who “would frequently surprise us with rare words that had occurred to them between sessions” (ibid).

“Mushroom” was especially amusing. A few days after drawing a blank, one elder reported that she had remembered it, but promptly collapsed into embarrassed laughter.  “When she finally managed to tell us the word, a full three days of abortive attempts later, we immediately saw the problem,” Harbour recalls.  “Kiowa has strong taboos against profanity and ‘mushroom’ in this eastern dialect is literally ‘lightning crap’.”  This speaker, unsurprisingly, does not eat mushrooms.

As tribal organisation has shifted from tight knit bands of bison hunters to individual landholders interspersed with non-Kiowas, both language and culture have become harder to preserve.  In fact, the US government has implemented various policies over the centuries to achieve this decline.  However, the Kiowa Tribe is now a federally recognised nation. (See www.kiowatribe.org)

Although the project did not aim primarily to preserve the Kiowa language, the work has resulted in numerous audio recordings with native speakers, alongside systematic documentation of vocabulary. With fluent speakers now few and elderly, this knowledge becomes all the more precious.

David Adger says, “Language is a very fragile thing. It takes just one generation for a huge amount to be lost.”