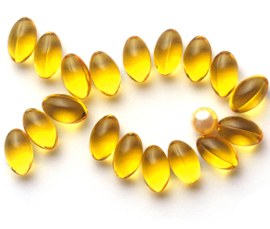 Throughout the 20th century, cod liver oil – rich in omega-3 fatty acids – was regularly given to growing children in order to prevent rickets, by boosting their levels of vitamin D. There is now ample evidence to show that the compounds present in cod liver oil also have a positive effect on the developing brain, encouraging healthy neural development.

Professor Adina Michael-Titus, Professor of Neuroscience at the Blizard Institute, has been experimenting with omega-3 fatty acids, which are found in cold water fish as well as other natural sources such as algae and walnuts, to explore and understand their neural protective properties.

Work with these compounds could have a major impact on the medical treatment of acute injury to the nervous system, as well as chronic conditions such as depression and schizophrenia. It may also play an important part in aiding healthy ageing.

Adina Michael-Titus is developing a preparation of omega-3 fatty acids that could be administered as soon as a trauma victim is found by the emergency team, before transfer to the hospital. In cases of spinal cord injury and general trauma, the sooner medical treatment can start, the better the prognosis for the patient.

Adina says: “we are very close to conducting clinical trials. The evidence so far suggests that these omega-3 fatty acids can really protect the nervous system after major neurotrauma, and significantly reduce the damage done by the accident.”

The air ambulance based at The Royal London Hospital transports trauma victims by helicopter, getting them to the Trauma Unit via the quickest route. Surgeons and other health professionals are then able to get to work as soon as the helicopter lands.

“The air ambulance makes such a difference to the treatment and prognosis of trauma victims,” Adina says.

It is not just spinal cord trauma victims who stand to benefit from a better understanding of the role that omega-3 fatty acids play in protecting the nervous system. "The evidence suggests that having a diet high in omega-3 fatty acids can help to prevent degeneration, as well as speed up recovery after severe trauma to the brain,” Adina explains.

“We now understand that these compounds are particularly important for example for the functioning of key areas in the brain, which are important for normal cognitive ability. One such area is the prefrontal cortex region of the brain. This is the area that is concerned with some of our most ‘human’ abilities – such as mood regulation, sociability, decision-making, and the control of impulsivity.”

“We have also done work which shows how these compounds could reverse some of the detrimental changes associated with brain ageing, and thus maintain an improved cognitive function in the elderly, and even confer some protection against neurodegenerative disease." (Dyall et al 2007; Dyall et al, 2010)

Our ever-growing awareness of the importance of diet

As a society, there is a growing awareness of the importance of diet for our health. What is perhaps less commonly acknowledged – or known about – is how diet can specifically affect our mind.

Adina says, “for optimum cognitive function, we would do well to revert to more natural diets – rich in unprocessed foods. In some ways, modern living has made it more difficult to get the nutrients we need.”

In the case of omega-3 fatty acids for example, there has been a steady decline in the dietary intake of these compounds. Our bodies do not naturally manufacture them – therefore, we need to eat cold water fish such as salmon or mackerel or find vegetable sources such as flaxseed or algae – or take good quality supplements.

With regards to supplements, Adina says: “of course, these are not regulated as tightly as pharmaceutical compounds at present – simply because they derive from a natural source. I expect to see many changes in this field in the near future”.

“In the past people have been inclined to dismiss natural compounds, but the accumulating scientific and clinical evidence clearly shows that they are as powerful – if not more so – as synthetic drugs, and they have a therapeutic potential which should be fully explored.”