How does our behaviour add up? 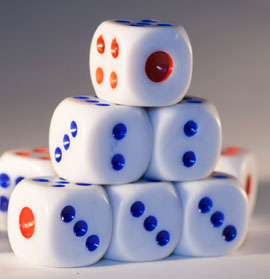 A game of dice

You’re in slow-moving traffic and a car coming the other way indicates they want to turn right. You could leave a gap for them to turn in front of you – or you could carry on driving, after all it’s your right of way.

Decisions like these are made in an instant and involve a myriad of factors – from whether the sun is shining to how much of a personal cost is involved.  And if you decide to flash your headlights, can the other motorist trust this as signal to go ahead?

Professor Nicolaas Vriend is interested in such issues. In his work as game-theorist he explores the transactional elements of human behaviour. Drawing on economic models, his research analyses why individuals make the choices they do, and predicts some of the consequences of those choices.

“Game theory is especially useful as a framework to make sense of the way people interact with each other,” Nicolaas Vriend explains. “Among other things, a game-theoretic analysis may help us understand how some interactions may lead to unintended outcomes, and how such outcomes may be at odds with our intuition.”

Earning trust with a smile

One of Nicolaas Vriend’s research projects explores how, when, and whether, we choose to signal our own trustworthiness, and assess that of others. Mutual trust is essential to successful human relationships at every level, between family members, friends, colleagues, and prospective business partners.

As a starting point Nicolaas Vriend takes the idea that simple body language cues – such as smiles or firm handshakes – are effective for establishing trustworthiness, stating:

“Such cues may be unconscious, hard-wired and shaped through evolution (as seems to be the case for some body language, facial expressions, or tone of voice) but they may also be the result of deliberate choice behaviour. Smiles, winks, handshakes, hairdos, tattoos, clothing, and personalised numberplates may fall in the latter category.” (On smiles, winks and handshakes as coordination devices, Vriend, Sadrieh, and Manzini, The Economic Journal, 119 (April) 826-854) Read the paper)

In order to examine just how these cues may affect our interactions with others, particularly in the context of successful business relationships, Nicolaas Vriend and his co-authors focused on a hypothetical business deal between two people.

If both individuals were to put in a high level of effort, then this would result in a better outcome for the business deal. However, putting in effort is costly. A game-theoretic analysis shows that a situation like this has multiple solutions. Any level of effort could result in a satisfactory outcome as long as both individuals choose the same level.

Solutions in which both individuals choose higher effort levels are better. Thus, what is crucial for an individual considering a high effort level is whether or not she can trust the other individual to do the same.

Getting the best deal

Nicolaas Vriend started with some hypotheses – firstly about how trustworthiness is established, and secondly about what difference trust makes to the outcome of a possible deal or partnership.

In order to put these hypotheses to the test, Nicolaas Vriend set up an experiment where participants were invited to play the game sketched above a number of times, each time with a different partner. This was done in a computer laboratory to reduce the amount of face-to-face interaction, allowing the researchers to focus on the effects of ‘deliberate’ signalling – rather than “unconscious, uncontrolled smiles.” [Ibid]

Each time the next game started, participants were unable to gauge how much effort the other was going to put in – but they were able to signal their readiness to play with either a ‘smile’ – or just a ‘ready’.

Is smiling worth it?

The results of the experiment are interesting. For example, effort levels in ‘smiling’ pairs were higher than for mixed or non-smiling pairs. Thus, people who ‘smiled’ genuinely signalled their trustworthiness, and apparently trusted that the same applied to their partners. Surprisingly though, the ‘smiling pairs’ did less well than their non-smiling counterparts. Despite the trust established by smiling, neither party was able to accurately predict exactly how much effort their partner would choose.

The key to establishing trust

This experiment prompts further questions, such as: how can we define the essential ingredients of the cues used to signal trustworthiness? There seems to be reasonable evidence that those used in ‘reality’ are much richer than the ‘smiles’ used in these experiments.

For example, a real handshake contains a wealth of information about a person's personality – through strength, duration, temperature, dryness, texture, and eye contact.

This becomes more relevant as online interactions become increasingly common, and emoticons are typically used in a way similar to the ‘smiles’ used in the experiments. This is an area that would benefit from further research.