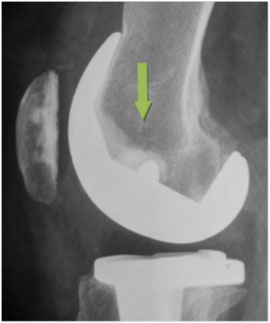 A commercial cement used in a knee revision arthroplasty (www.graftys.com)

QM PhD student Niall Kent and his supervisor Dr Natalia Karpukhina have won £50,000 in funding from the QMI Proof of Concept Fund for their work with medical bone-substitute cements. The QMI fund is designed to provide funding for fast-track commercial validation of research.

The team’s research is set to improve the treatment of a range of skeletal disorders like osteoporosis and bone cancer, and as such, will have an immediate impact on people’s lives.

Niall says, “Being able to improve on what is currently available is really exciting. In many ways, it’s the whole point of doing research.”

Putting together the funding proposal proved to be an interesting process for Niall. He says, “it’s really got me thinking about things in a different way. Not just the investment potential of the product, but how it would work in a clinical setting. Thinking about what doctors actually need and want opens up new avenues for future research.”

Medical cements have been around for some time, a calcium phosphate cement was developed in the 1980s – originally for use as a dental cement – but subsequently adapted for use as a synthetic bone graft material.

Nowadays, all major orthopaedic companies have developed at least one calcium phosphate cement (CPC) for use in treating a variety of conditions – such as spinal compression fractures and bone tumours.

What makes bioactive glasses so special?

Bioactive glasses have several properties that give them an advantage over the calcium phosphate salts traditionally used in the manufacture of CPCs.

1. Greater control: the exact composition of glasses can be altered which gives greater control over the properties of cements
2. Faster setting times: glasses are in a higher energy state than equivalent crystal structures which means they are more soluble and set more quickly
3. More effective: the glasses can be mixed with different compounds to allow for topical application of treatments.

The team have experimented with adding a number of different compounds to cement prototypes. One version, manufactured to form fluoroapatite, is designed to treat dental conditions involving tooth loss. The material can be injected straight into the tooth sockets to prevent the jawbone collapsing and being resorbed by the body. Including fluoride is also helpful for future protection of the teeth.

The team have also created a version containing strontium, a chemical element used in the treatment of osteoporosis. Strontium inhibits osteoclast and promotes osteoblast – which means that it prevents bone resorption and promotes bone growth. The targeted delivery of strontium will also prevent other bones from being affected by osteoporosis.

“We’re able to control the exact ‘resorbability’ of the cements, which is really beneficial and novel” says Niall. “When using these materials to deliver drugs you avoid any problems associated with taking medicine systemically.”