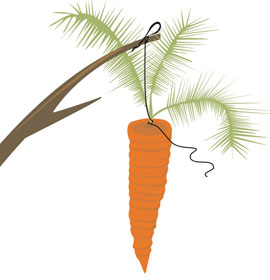 Getting a mobile phone top-up voucher for attending routine sexual health screening – or money off your next shop for buying more fruit and vegetables are just two examples of the kind of incentives used to encourage healthy behaviour.

Schemes such as these usually provoke an opinion from the public and experts alike. Whether for or against, reactions are usually coloured by questions of morality – is it right, wrong or even dangerous to offer people money for changing their behaviour?

These sorts of questions are the starting point for much of Professor Richard Ashcroft’s work. A philosopher based in the School of Law, Richard Ashcroft is also co-director of the Centre for the Study of Incentives in Health.

Incentives have been used in a range of healthcare initiatives – from rewarding people for eating healthily and encouraging smokers to quit, to persuading people with schizophrenia to take regular medication.

In some cases, research shows that such schemes can have successful results. A systematic review of recovering alcoholics and drug addicts involved in two different treatment schemes – one that used small incentives to motivate and encourage abstinence (or reduction in consumption), and one that did not – showed that incentivised schemes led to greater success. (See: http://www.sciencedirect.com/science/article/pii/S0376871603003405)

Richard Ashcroft adds, “unfortunately there was no follow-up to this study so we don’t know how successful it was in the long-term. Even so, it makes sense that incentives help people achieve a difficult goal. Breaking things up into achievable steps is a motivational practice used in many different fields – from athletic training to business leadership. Psychologists have termed this ‘staging’ – breaking a long-term goal into lots of small stages. The rewards help to remind you of your progress.”

“However, the really interesting thing about the reactions people have to the use of incentives is the way they are not necessarily informed by whether or not such schemes actually work.”

An important focus of Richard Ashcroft’s work is the way in which our opinions about incentive schemes are formed – rather than their relative merits and failures per se.

An analysis of UK media coverage of the use of financial incentives revealed which schemes were getting the most coverage, and what kinds of arguments were being used both for and against the schemes.

Overall, the UK media was seen to report a mix of views on the use of incentives – with positive or favourable arguments slightly outweighing the negative. One possible reason for this is the extent to which journalists relied on official sources for their articles: “This ensures prominence of the views of sources favourable to the schemes, such as government and health service spokespeople.” (Financial incentives to encourage healthy behaviour, H Parke et al, See: 10.1111/j.1369-7625.2011.00719.x)

“There is also a really clear link between our assessment of how ‘deserving’ or ‘to blame’ patients in such schemes are deemed to be,” says Richard Ashcroft. “Generally people seem to be more tolerant when it comes to treating conditions such as diabetes or accidental injury which do not carry any blame for the patient. When it comes to quitting smoking schemes or treatment for drug addiction, opinion becomes much more sharply divided. The more that people feel the patient is to blame, the less popular incentive schemes are, as they then seem to be about rewarding bad behaviour, and using the public purse to do it.”

“This whole area raises many interlocked questions about how people come to make judgements about what they believe,” Richard Ashcroft continues, “and policymakers respond to all kinds of pressures when making policy. Hard scientific evidence is only one of them.”

Centre for the Study of Incentives in Health – a collaborative approach

Funded by a Strategic Award in Biomedical Ethics of £850,000 from the Wellcome Trust, the Centre for the Study of Incentives in Health (CSI Health) is a collaboration between Queen Mary and partners: King’s College London and the London School of Economics.

Together, they are organising their research around a central question ‘When is it right to use financial incentives to improve health?’ CSI Health is also training and drawing on the expertise of post-doctoral fellows and PhD students. The idea is to create a cadre of interdisciplinary specialists to undertake innovative, substantive research and advise policy makers.