Can a strong local community improve your health? 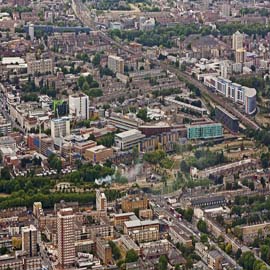 In a context of growing inequalities between rich and poor in the UK, the closure of community organisations and charities, and a reduction in publically funded services, there has never been a better time to ask: how important is community life for our wellbeing, especially for people who live in disadvantaged circumstances?

Dr Vicky Cattell, Honorary Senior Lecturer in the Wolfson Institute of Preventive Medicine at Queen Mary, has spent more than a decade conducting research on housing estates in east London to examine this question, the results of which are published in her new book Poverty, Community and Health: Co-operation and the Good Society (Palgrave MacMillan).

Using narrative data collected from more than 220 in-depth interviews with people living in deprived circumstances, Vicky analysed the relationship between local communities and access to social capital, and health, wellbeing and happiness. By focussing on the interrelationships between these various factors, she believes that we can gain not only a better understanding of the social processes involved in health and wellbeing, and the links between poverty and place, but also a better understanding of the different ways in which people cope with social and economic difficulties and resist their damaging effects.

Decline of place-based communities
“For a number of years now, sociologists and geographers have argued that contemporary society is experiencing a decline in place-based communities,” says Vicky. “This hits people on low incomes hardest because they tend to be more reliant than others on the local area and what it provides.” Vicky says that for those facing overwhelming problems in their day-to-day lives social contact and access to social capital – such as co-operative networks and involvement in local organisations – can be very valuable. “While there will always be individuals whose unhappiness or poor health will have more to do with their personal circumstances and life experiences than with the places they live in, those living in an area without a strong sense of community fare worse than residents in places where community features are able to ameliorate the effects of disadvantage,” she says.

Factors that shape community life
Vicky has identified several factors that help to positively shape different forms of community life and its resilience, including: a shared sense of history; the collective use of public spaces; satisfaction with the quality and design of the built environment or with local services; shared meeting places; the work of community development officers; and co-operatively organised tenant management. In contrast, places with a high population turnover and an alienating or poorly resourced physical environment, which can then combine with a stigmatized reputation of an area, help to isolate residents from each other.

Social capital’s benefits and limitations
Vicky found that individuals involved in community organisations, such as self-help groups, campaigns, charities or voluntary organisations frequently gained in self-esteem and confidence, and a renewed sense of optimism linked to making new contacts. Nevertheless, sometimes participation could become a source of stress – where, for example, decision-making processes were felt to bypass residents or where there was tension or conflict between groups. Overall, however, east Londoners expressed their appreciation of the advantages ‘community’ creates for everyday lives, although this appreciation does not supplant a desire for independence, for personal advancement or a better standard of living. Nor does a valued collaborative culture remove the need for assistance from essential public services.

The role of different types of social networks
One of the key ideas to emerge from Vicky’s research is the significance of different structural patterns of social networks for understanding processes involved in health and wellbeing. “Our social networks are an expression of the richness or impoverishment of our lives,” she says. “The effects of problems such as personal or family difficulties, the experience of bereavement, or poor housing, unemployment and poverty, are exacerbated for people whose social networks are very restricted, for example, based exclusively on family or neighbourhood ties. Whereas people able to mix in broader social networks made up of strong (local family, friends, neighbours) and weak ties (via local activities) are better placed to cope with life’s challenges.”

Some implications of current policy agendas
Many of the Coalition Government’s policy initiatives have alarmingly negative implications for people on low incomes and for the sustainability and vibrancy of their communities argues Vicky. Not only are levels and depths of poverty expected to increase, councils in the poorest areas are struggling with particularly heavy cuts to their budgets. Vicky says: “This is leading to the curtailment of day centres, youth projects, luncheon clubs, voluntary organisations and charities. The prospects for community life in working class areas are looking bleaker than they have for decades. Meanwhile, the better off in society, through access to a wider range of experiences and resources, have better chances of health and happiness.”