A new script for prisons 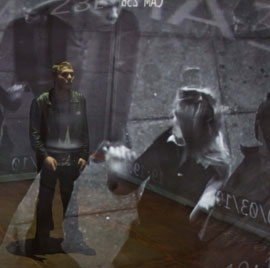 What are prisons for? Can drama open up new conversations about the penal system? And how can dramatic interventions best serve the needs of the incarcerated as well as society as a whole? These are just some of the questions that Dr Caoimhe McAvinchey addresses in her work.

Not only does an ever-increasing prisoner population cost the UK taxpayer a great deal (in 2008/09 it cost an average of £39,600 to keep a prisoner in prison for a year, www.parliament.uk), but there is little evidence to suggest that prison stops people offending.

There are a number of organisations using drama to work with prisoners; many of them running workshops designed to build transferable skills such as effective communication and teamwork. Indeed, as Caoimhe McAvinchey writes in her book theatre & prison, “many examples of contemporary theatre in prison frame their practice through the outcomes they promise.” (p58)

For example, the organisation Clean Break (www.cleanbreak.org.uk) works with women with experience of the criminal justice system. It has a purpose built educational, social and cultural space in Kentish Town that supports formal educational and personal development opportunities. Only Connect (www.onlyconnectuk.org) offers a members club for ex-offenders with weekly social evenings, theatre trips, family days and weekends away,

“Initiatives like these take the pressure off” says Caoimhe. “A lot of demands and promises are made of drama – particularly within the context of evaluating projects for funding reasons,” she continues. “We’ve become so preoccupied with proving how drama can be a positive element in prisoners’ experience, that we’re neglecting to ask what prison is for.”

“In a way working with drama in prisons has become an embedded part of the system. I think we need to think beyond such terms, to ask a different set of questions.”

What is prison for?

The question is not as simple as it may at first seem. We are so accustomed to prisons as part of the structure and fabric of our society – yet they have existed in their current form only since the late eighteenth century. Before that time, prisons were holding places for people waiting to be sentenced to public floggings and executions.

Since the early nineteenth century prisons have been conceived of as places of reform and correction – rather than just waiting places. Yet with high levels of re-offending (approximately one-half of adult prisoners reoffend within one year of release, www.parliament.uk) and ever increasing numbers of prisoners, it is clear that it is time to rethink how we treat criminals in our society.

This issue is further complicated by the fact that many UK prisons are now managed by private companies, giving rise to a multi-billion pound industry.

“Questioning the idea of prison in the twenty-first century uncovers a network of power relations between the individual and the state, revealing the economic concerns which re-inscribe a status quo of hierarchy and control.” (theatre & prison, Caoimhe McAvinchey p34 – 35).

The use of drama has had a powerful effect on public opinion and government policy in the past. To take just one example, the play Justice by John Galsworthy featured a character, Falder, who endured solitary confinement for three months. At the time of writing (1910) this was common practice.

The cell was realistically recreated on stage, and Falder was shown pacing his cell in increasingly great distress. The performance touched a nerve with the public and resulted in “many ‘tear-stained’ letters to the then Home Secretary, Winston Churchill, begging him to reconsider the use of solitary confinement.” (theatre & prison p43)