Rubber: the next generation

Dr James Busfield is working towards the next generation of rubber, from improving the performance of car and aeroplane tyres, to developing new applications for ‘smart’ elastomers 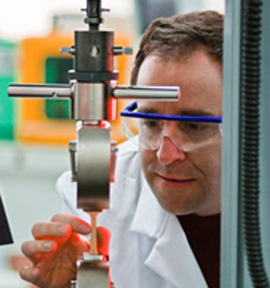 A glass tabletop rests on a stack of Formula One rubber tyres in James Busfield’s office, making the perfect table for the man who heads up the Rubber Research Group at Queen Mary. Over the years, James Busfield has worked across a wide range of projects – from improving the performance of car and aeroplane tyres, to developing new applications for ‘smart’ elastomers.

Reinventing the wheel: working towards an AAA rating

The first rubber tyre prototype was made in 1887 by John Boyd Dunlop for his son’s bicycle – allegedly to help prevent his son getting headaches from riding over rough roads. Since then, tyres have undergone an almost continuous process of improvement, developing and growing alongside the automotive industry.

Much of the work carried out by Queen Mary’s Rubber Research Group feeds into this process of continuous improvement; James Busfield, for example, is currently working with Bridgestone to help produce the first tyres to be rated AAA in the new independent tyre ratings (similar to the tyre ratings currently used in shops to assess domestic appliances like fridges) and due to be introduced in Europe in November 2012.

The three tyre rating categories are: fuel consumption, wet traction and noise. In the past, the difficulty with achieving an A grade in all three categories lies in their contradictory nature. For example, a tyre that scores highly for grips will not currently be able to score well for fuel-economy.

A solution to this lies in the materials used in tyre construction. James Busfield is experimenting with different fillers to improve performance – for example replacing some of the carbon black currently found in all tyres with silica or other novel nano materials such as nano clay. These materials can be tailored to have enhanced fuel economy under normal driving conditions without reducing the traction properties under severe breaking.

Natural raw rubber is well-known to be an electrical and thermal insulator. We use it to protect us from scalding liquids or electric shocks. However, as soon as conducting carbon is added at any significant volume to make a composite elastomer, it becomes highly conductive. The carbon particles form an interconnecting conductive network. And as the rubber composite is stretched and twisted, its conductivity changes – because the space between the particles changes too.

James Busfield has been investigating how ‘smart elastomers’ with variable electrical conductivity can be put to use in practical applications. He says, “it could work as an early warning system for bridges. When a bridge takes a load that exceeds its capacity it could set off an alarm triggered by the rubber ‘registering’ the overload condition. The rubber elastomer could be manufactured to become conductive only when an excessive pressure is applied.”

This technology has many other potential applications – for example: seals, switches and others types of sensors.

You can also study for: