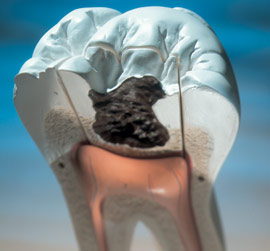 “Nearly everyone will, at some point, suffer dental caries – so preventive dentistry has a really important role to play,” says  Dr Paul Anderson, who has been focusing on the role that saliva plays in good dental hygiene.

“Developing teeth is an embryonic process – so once they’re gone, they’re gone,” explains Paul Anderson. “Nature has developed this incredibly sophisticated system of protecting and preserving our teeth – with saliva.”

“Other mammals produce much more saliva than humans – and have a far lower incidence of dental caries.”

“Saliva and enamel are really one system – they have been studied separately in the past, but it is far more accurate to think of them as two sides of the same coin.”

Paul Anderson is interested in the way that certain proteins in saliva serve to protect enamel against acid demineralisation – and prevent dental caries. His research focuses on whether new analogues of these proteins can be engineered that could be used in novel preparations to protect teeth. One such protein is called statherin, which has been shown to play a role in reducing the dissolution of enamel.

“We know that statherin has calcium binding sites, and also hydroxyapatite binding regions,” says Paul Anderson. “If you replicate the conditions of acid attack on tooth enamel in the test tube, and coat the enamel with statherin the dissolution rate drops by about half.”

A successfully emulated saliva substitute could be incorporated into dental products – for example toothpastes and mouthwashes. Paul Anderson has a patent-protected formula and is currently in discussion with GlaxoSmithKline to develop a commercial product.

The condition is a frequent side-effect of many medications. It is also is particularly common in people who have undergone treatment for head and neck cancers, as the treatment often destroys the saliva glands. The result is a dramatically decreased quality of life: with severe Xerostomia, sufferers cannot easily swallow or talk – let alone taste their food. And without protection from saliva, teeth are extremely vulnerable to dental caries. In the worst cases all teeth are destroyed.

Saliva replacements have been developed for Xerostomia sufferers – yet these have mainly addressed difficulties with basic functions such as swallowing and speaking. Few replacements have considered the role that saliva plays in keeping teeth healthy.

A replacement that contains the biomimetic peptides that Paul Anderson has identified as being protective of tooth enamel could be a really important development in the treatment of the condition.