How can we extend digital inclusion to older people? 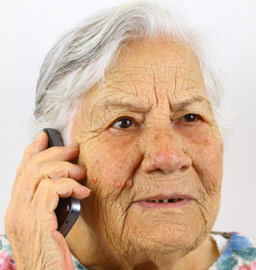 It has just taken you 35 minutes to open a tin of soup because your old tin opener isn’t designed for hands that have been twisted by arthritis – but the electronic “assisted living” version they showed you in the clinic was so confusing you decided not to try it. Your GP has introduced email consultations and given you your own blood pressure machine, but you preferred the old days when the district nurse popped in on Tuesday mornings.

Whilst some older people are adept with new technologies, many are “digitally excluded” through a combination of physical impairments, mild memory loss and limited experience or confidence. And with greater numbers of people living for longer, effective solutions to their digital exclusion are urgently needed. There is a growing awareness that technologies have a social dimension and that designing technologies which “work” is as much about understanding the social context of their use (or non-use) than it is about the technology itself.

“Traditionally the design of assistive living technologies has been led by geeks. They have developed attractive, elegant gadgets which sit in the cupboard or on the shelf. The problem partially lies in the fact that the designers haven’t thought enough about the person who will be using it or the organisational support (such as the link between a communication technology and a health or social care professional),” explains Professor Trisha Greenhalgh, joint lead of the ATHENE project.

The ATHENE project – Assistive Technologies for Healthy Living in Elders: Needs Assessment by Ethnography – is dedicated to developing better ways of developing useful technologies for older people. Professor Trisha Greenhalgh  is working with colleagues at the University of Manchester, as well as the NHS, technology industry and voluntary sector to develop ways of “co-designing” technologies and the social microsystems in which they are effectively used.

Trisha Greenhalgh cites an example from her team’s literature review: “One study described an elderly woman who had a beautifully made, well-balanced walking frame, only it was too wide to fit through the doorways in her flat, and she didn’t want to think of herself as needing a walking aid. So she used her vacuum cleaner for walking support. The vacuum fit though her doors, and because this technology was familiar and non-stigmatising, she used it regularly and without shame.”

This example, based on the same kind of ethnographic study of people in their homes which is planned for the ATHENE project, suggests that bridging the digital divide may be partly about adapting existing items for different use rather than creating entirely new equipment.

As Trisha Greenhalgh says: “I think we’re going to find that things are much more mundane and earthly than the ‘digital economy’ rhetoric sometimes suggests.”

How ATHENE will include older people in assistive technology development

In phase one of the project researchers will be visiting up to 50 elderly people in their homes, with the object of talking to them about their experiences – and in particular their difficulties with day-to-day living.

“We are going to go into people’s homes and hang out for a couple of hours and talk to them about the challenges they face,” says Greenhalgh. “We will ask them to use cultural probes – camera, tape recorders, cards and so on – to collect information about their lives and the things they’d like to be able to do, and then go back and talk about these materials to gain a rich understanding of the person in their environment.”

Phase two of the project will involve up to 10 volunteer cases working directly with industry designers to come up with suitable new technologies alongside efforts to build an appropriate network (of family, friends and perhaps professionals) who support the person in using the technology.

The ATHENE project is being funded by the Technology Strategy Board (www.innovateuk.org) in recognition of the fact that, to be truly effective, new designs need to be devised in line with how people live and what they really need.

As well as addressing the real problems people have, there’s a cost factor: solutions need to be affordable if they are to be widely taken up.

“We are turning things on their head – elderly people won’t be the object of technology design, but the subject,” Greenhalgh explains, “and this approach has the potential to really revolutionise the way assistive technologies are developed.”