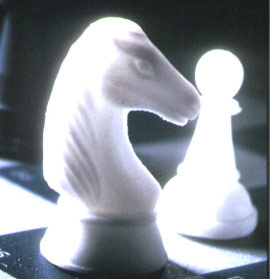 A chess piece made of glass

Glass in its common form – used in windows and spectacles – is a reasonably stable and chemically inert material. However, altering and disrupting its structure very slightly and making the particles less regimented utterly changes the way that glass behaves.

This ‘less regimented and disrupted ’ version of glass can be combined with any number of chemicals and elements and used for a huge variety of medical and dental applications.

Professor Robert Hill has been working with glasses for a number of years. He explains, “much of my research has been concerned with glasses that dissolve”. The benefit of this feature will soon become clear.

Imagine a world where dentists no longer used drills and anaesthetics to treat dental caries: it may be closer than you think.

Instead of using a standard drill, highly compressed air mixed with alumina particles can cut though teeth – and safely ‘bounce off’ soft tissues. This form of air abrasion has been used for some time in the US, particularly in paediatric dentistry. However, take-up of the technology has been slow, partly due to concerns about the consequences of swallowing and inhaling alumina.

Robert Hill has developed a version of the air drill that uses glass compounds in place of alumina. And because the glass particles are manufactured to dissolve after ‘cutting’ the teeth, then the drill is much safer. Not to mention much more likely to be popular with patients!

Robert Hill has developed a chewing gum that contains very finely powdered glass combined with calcium, phosphate and fluoride. The gum is manufactured so that the glass particles bind to the teeth and slowly release the chemicals as they dissolve. The calcium phosphate and fluoride protect the gums and teeth from decay and disease.

The chewing gum is not yet available to the public, but it is patent protected and there are plans for it to be manufactured by a company active in this field.

When very finely powdered glass is mixed with polymeric acid it leads to a chemical reaction. The acid degraded glass particles form a glass polyalkenoate cement which chemically bonds to human bones and teeth forming an extremely strong connection.

This adhesive cement can be used for cochlear implants – to bond the implant to the very delicate ear bones. Professor Robert Hill explains, “they used to use silicon adhesives – but silicon is hydrophobic so didn’t stick when the bone surface was wet. Keeping it dry while performing ear surgery was almost impossible.”

The cements are also regularly used to fill teeth. They are manufactured in pre-measured doses of powdered glass and acid, which can be mixed and used on demand. Professor Hill has been involved in the development of these materials widely used for dental filling material.

The human body is very good at detecting foreign materials – a fibrous capsule forms around them in protection. However, this excellent natural capacity is unhelpful when the foreign object is a prosthetic hip or bone graft placed in the body.

A coating of bioactive glass – a glass that has been specially constructed to dissolve in the body and forms the mineral apatite – serves to encourage the graft or prosthetic to integrate successfully. The apatite that forms as the glass dissolves acts as a bio-mimetic: the body is tricked into believing the insert is a natural part of the body.

That’s because apatite – calcium phosphate – is a naturally forming mineral with the same chemical composition to human teeth and bone. In fact around seventy per cent of human bone is made up of apatite.