Can we escape urban pollution? 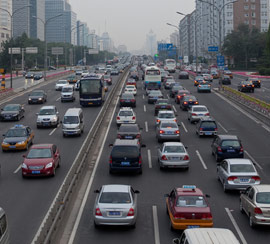 Air pollution is a fact of modern city living – we rely heavily on petrol and diesel-powered vehicles for the transport of both people and goods – from stocking supermarkets to clearing refuse.

Professor Jonathan Grigg spells out the impact that this can have: “Along busy roads, car exhausts are releasing an invisible mist of black carbon particles that are inhaled directly into the lungs.”

Over the years the UK government has made moves to cut pollution – from the first Clean Air Act (introduced in 1956) to the introduction of London’s congestion zone.

Yet beyond initiatives like this one, people often feel powerless when it comes to avoiding pollution: “There is a general perception that we have no choice about how much pollution we are exposed to,” says Jonathan Grigg.

“Providing more information about personal exposure to air pollution, may allow individuals to reduce their own exposure – for example by choosing to commute to work using a low-pollution route.”

Numerous studies have demonstrated the negative effects of carbon pollution on respiratory health – exposure can lead to heart attacks, bacterial and viral infections, asthma and even various cancers. After cigarette smoke, the main source of carbon pollution is car exhaust fumes.

However, as the carbon particles released in car exhaust fumes are so tiny, they pose a threat that is far too easy to overlook. Jonathan Grigg is involved in a study that may help to raise awareness of the risks associated with carbon pollution.

CARMAC: Assessing the levels of carbon inhaled in east London

Healthy adults who cycle frequently have elected to take part in a study being carried out by Jonathan Grigg and his team: CARMAC (Correlation between measured black carbon exposure and alveolar macrophage carbon loading in urban commuters).

A total of 50 commuters will take part over a period of six months. During this time, they will wear GPS devices to establish whether or not they are using busy main roads.

This involves study participants breathing in a salty mist that encourages cells inside the lung to be coughed up for analysis. The exact amount of black carbon that has been inhaled and retained by the airway immune cells will then measured using image analysis.

The pollution associated with car exhaust is extremely localised – even walking on the far side of the pavement alongside a busy road may offer some protection from exposure.

What Professor Grigg hopes to show is that for city cyclists, using less congested roads could make a real difference in terms of the amount of carbon that is inhaled. Which in turn could reduce the risk of future health complications.