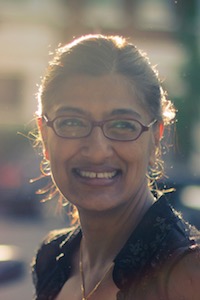 Manjeet Ramgotra studied Politics and French at the University of Saskatchewan in Canada. After living in France for a number of years, she wrote a PhD in political theory at the LSE. She teaches political theory at SOAS and joined QMUL as a Visiting Research Scholar in September 2020.

Manjeet’s research focuses on republicanism, decolonising the political theory curriculum teaching to include more women, people of colour and reconsidering how we construct knowledge. Her PhD thesis examined the conservative roots of republicanism in the ideas of Cicero, Machiavelli and Montesquieu. She has a deep interest in French Enlightenment thought and has written on Rousseau. Recently, her research has turned to the analysis of republicanism in the twentieth-century post-colonial moment. She is working on the conceptualisation of self-rule and the public thing in the founding of the Indian republic through the ideas and lens of anti-colonial activists, including Nehru, Gandhi and Ambedkar. In addition, she is co-editing a new political theory textbook called Reconsidering Political Thinkers.

‘Can democracy vote itself out of existence?’ The Conversation, 16 July 2018: https://theconversation.com/can-democracy-vote-itself-out-of-existence-99988