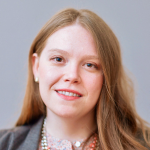 Research Topic: Realizing Domestic Workers’ Rights from Institutionalization to Internalization: The Role of Labour, Care and Migration Rights Regimes in Argentina and Uruguay

Simca holds an MSc in International Migration and Public Policy from the London School of Economics (LSE) and a BA (Hons) from McGill University. Her doctoral research is funded by the Queen Mary University of London Principal’s Studentship. She has also held a Doctoral Associateship in Gender, Migration and the Work of Care from the Centre for Global Social Policy at the University of Toronto and received fieldwork funding from the Society for Latin American Studies (SLAS).

Simca has held several research and policy posts in the areas of care, migration, employment and development in Canada, Argentina and the United Kingdom. Prior to commencing her doctoral studies, she presented research before the All-Party Parliamentary Group (APPG) on Housing and Care for Older People. She has also been involved in the planning and co-ordination of international academic events on the topics of care and domestic work.

Simca’s research examines rights-based governance of domestic work in the MERCOSUR. Her case studies focus on the institutionalization and implementation of care, migration and labour rights in Uruguay and Argentina.