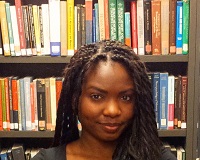 Research Topic: Radical Pedagogy and the Politics of Development in Small States: The Case of Barbados since Independence

Jenna is a second year PhD candidate (fully-funded) in the School of Politics and International Relations. She holds an MRes in International Relations from Queen Mary, University of London (partially funded by department scholarship award, 2009) and a bilingual Honours degree from York University (partially funded by the Barbados Exhibition award, 2005) in Canada. She is also a member of the Society for Caribbean Studies, UK and the Barbados Economic Society.

Her overall research interests seek to explore the impact of international civil, political and economic actors and relations within the developmental process of small island developing states, with particular reference to the Caribbean. Her MRes dissertation sought to explore the manner in which private international financial institutions (IFIs) influenced the developmental processes within small island developing states.

A researcher by training, she has worked on topics related to economic and social development within Latin America and the Caribbean. Prior to joining the School, Jenna held the post of Research Fellow at the Barbados Coalition for Service Industries, where she prepared country briefs and reports for various public and private sectors agencies including the Barbados Ministry of Foreign Affairs.

In addition, Jenna has worked as a print media journalist and has been featured on radio broadcast covering national, regional and international current affairs with a particular focus on economics, business, energy & green economy in the Caribbean.

This academic year 2013/14 she will be undertaking the role of Teaching Assistant on the first-year undergraduate module 'Introduction to International Relations.'

Successfully obtaining a Special Award from the Ministry of Education and Human Resource Development in Barbados, my current research seeks to locate education as part of a broader radical political project in the developmental process in nation-building period after constitutional independence in Barbados.  I aim to identify and analyse the various political and economic actors within informed the politics of development particular in the area of education as conceptualised as a key driver of both social and economic development opposed to other variants of development approaches employed in the Caribbean region.