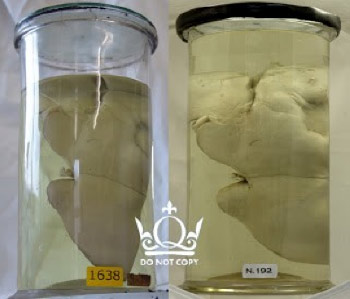 A portion of a liver, showing the deformity produced by prolonged “tight-lacing”. From a woman aged 52, who died from chronic nephritis and diarrhoea. Post-mortem there was chronic renal disease, ulcerative colitis and a malignant new growth of the stomach

Perusing a recent issue of Grazia magazine I was very interested to see an article entitled Shock Rise of the 'Barbie Waist' as I have been researching this very topic after conserving specimen N.192.

This pot contains a large portion of the liver of a 52 year old female. It is supposedly exhibiting the deformities caused by prolonged 'tight-lacing' of corsets (as you can see from the above catalogue excerpt) and is dated 1907. The liver is on its side in the glass pot, and the deformity can clearly be seen in the form of a sulcus or cleft splitting the right lobe of the liver in two. Turned on its side and placed next to a normal liver you can see this groove shouldn't be present. The theory by the doctor performing the autopsy is that it may have been formed by the upward pushing action of the corset on the liver during prolonged wear. (The depression in the top part of the right lobe is a cyst.) 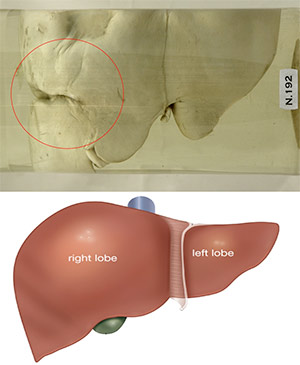 The sulcus, circled, is an anomaly

In fact it's large enough to have created an 'accessory lobe' in the right lower quadrant (which you can see from the back).

This was an interesting pot which caused a lot of discussion at the Victorian Body Parts Conference held in Barts Pathology Museum in September as the jury is still out about exactly how much damage is caused by corset wearing. There is a fascinating ‘tight-lacing’ post with video footage on their website. The pot has also become the object of more discussion with several doctors who I have consulted with.

Corsets were a popular addition to female attire from the 16th Century onwards, introduced from Italy to France by Catherine de Medici. It wasn't until later they became an integral part of every woman's outfit, and the term 'corset' was used in English around 1830. It was 10-20 years after this that 'tight-lacing' became incredibly popular in order to create an 'hourglass' figure. 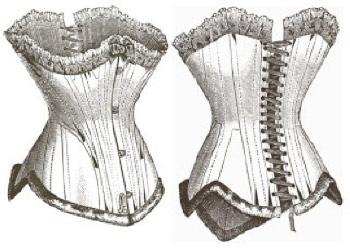 At the time, the medical issues attributed to prolonged corseting included such conditions as 'hysteria' and 'fainting', but the reality is they were causing visceroptosis which is a prolapse or sinking of the abdominal viscera. However, visceroptosis is also caused by pregnancy. The corsets were, in extreme cases, leading to indigestion and heartburn, constipation OR diarrhoea, headache, vertigo and much more. But if these symptoms had been very common, perhaps corsets wouldn’t have been so popular?

Our female in specimen N.192 had her cause of death declared as 'Chronic Nephritis and Diarrhoea'. She also had chronic renal (kidney) disease, ulcerative colitis (inflammatory bowel disease) and a malignant new growth of the stomach. However, cancer of the stomach is not caused by wearing a corset – it’s coincidental that she suffered from this illness. Furthermore, the deformity has subsequently been identified by two different doctors as actually being Reidel’s Lobe or Accessory: a normal anatomical variant that is very rarely seen. 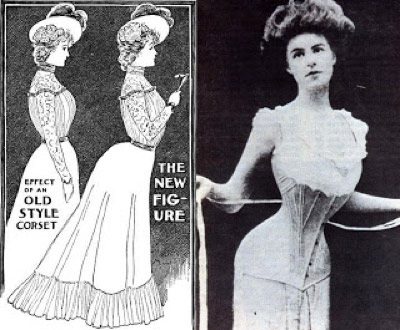 We've learned however, via Grazia, that the corset is not yet confined to history and there is a similar article here. A slim waist has once again become a status symbol for young females trying to attain the perfect figure, and despite the possible dangers cited, waist training is increasing in popularity. We tend to associate corsets with the Victorian era but they did of course continue into the Edwardian era when the popular S-shape (above) became a new female ideal. Then, despite the famous Campaign for Rational Dress they became popular again in the pin-up era (late 1940s to early 1960s) as epitomised by the beautiful Betty Brosmer. Her measurements were an incredible 38-18-36!

And of course one of the world's most famous corset wearers is currently burlesque artist Dita Von Teese. She looks quite healthy and in proportion as her measurements are 32-21-32 but in a corset she can squeeze her waist down to a miniscule 16 inches.

However, the current Guinness World Record holder for 'smallest waist in the world on a living person is Cathie Jung who is 39-15-39!! 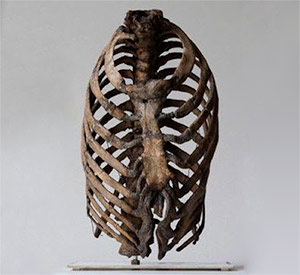 Looking at the above picture I'm not sure the effort is worth it. My own thoughts on the subject are that while the corset may well cause deformity to the bones over several years (such as the floating ribs) it’s unlikely to cause deformities to the organs, like the one in our collection. In fact, the rarity of that specimen leads me to believe that surely if the corset caused so much deformity this wouldn’t be such a rare specimen?