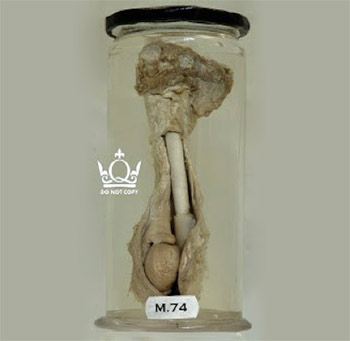 "A congenital hernia from an adult. The roll of paper is passed through the inguinal canal into the cavity of the tunica vaginalis testis, in the place formerly occupied by the protruded intestine.

A hernia occurs when an organ (or part of an organ) protrudes through the wall of the cavity which normally contains and protects it. A hernia can therefore happen in many places on the body. This is an inguinal hernia which is very common and luckily they can now easily be treated with surgery - they are in fact the most common elective surgery in the UK.

In a hernia such as this, the small bowel descends through a weakness in the abdominal walls and manages to protrude into the tunica vaginalis of the testicle. (It may seem that something with the word ‘vaginalis’ in it would belong to a woman but the word ‘vagina’ actually comes from the latin meaning ‘sheath’, so in this instance it’s the sheath which covers and protects the testicle that we’re talking about.) There are different factors which cause hernias, some congenital, but there are lifestyle choices which can make the likelihood of getting a hernia worse: obesity for example, or incorrect posture and incorrectly lifting heavy weights.

In this specimen, you can see a roll of paper which was placed there by the esteemed surgeon Percival Pott after dissection of the hernia and removal of the intestine portion that originally occupied that space. 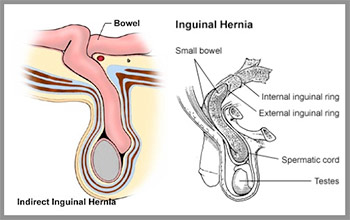 What’s really remarkable about this specimen is that it’s the oldest in the collection and as you can see from the archive data it’s from around 1750. The fact that the roll of paper has still survived is quite amazing. Unfortunately the Perspex was leaking so I decided that for safety of the specimen and for aesthetic appeal, I would put the hernia into a glass pot with fresh fluid. I hope you think the results are worth it.