"A fracture of the mandible. The jaw is broken between the canine and the first bicuspid teeth on either side. This is the common seat of fracture. It was wired during life. (1886) From a boy, aged 14, who was caught between the rollers of a printing-machine, sustaining such injuries that he died within a week. 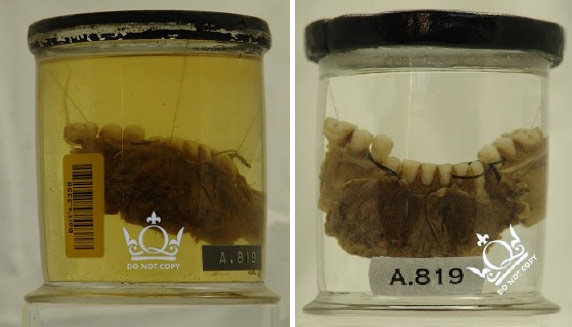 Fracture of mandible (Bi-lateral), before and after

After some research we can surmise that the printing press mentioned is more than likely to be a rotary printing press which were popular from the 1860s. 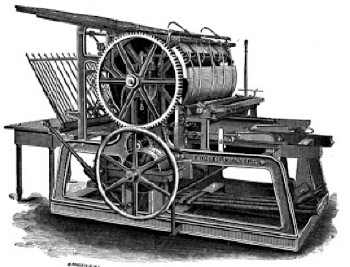 Children working in factories suffered horrendous injuries like the one illustrated in A.819 regardless of the goods manufactured. Digits were mangled, scalps were ripped from heads and limbs were severed. In fact, we have several other examples of Occupational Injuries and diseases following the Industrial Revolution that will be on the blog in future.

Thankfully, a series of Acts from 1819 onwards imposed on factory owners the duty to look after the health and safety of their workers. From 1850 mines were regularly inspected. By 1850, women, children and young people could work ‘only’ ten hours in a day, and ‘only’ between 6am and 6pm, so night work was now forbidden in factories, and from 1860, boys under twelve could not be employed in coal-mines. As you can see though, this didn't stop accidents from happening frequently.