Lessons from the Eurozone crisis: EMU limitations and national bargaining

The Eurozone crisis refers to a series of financial difficulties during the 2010s in Europe, following on from the 2007 financial crisis. Starting with the Greek debt crisis (2010), the Irish public debt crisis (2010) soon followed and at the end most of the Eurozone countries were affected. To resolve these problems and avoid the disintegration of the Eurozone, Greece and Ireland, but also Cyprus, Portugal, and then Spain received exceptional assistance from the European Union. These countries first benefitted from  the European Financial Stability Facility (EFSF), a stabilisation fund in the form of a common debt fund created for the occasion. Then, from 2012 onwards, the European Stability Mechanism (ESM) was set up as the successor to the EFSF, to recapitalise banks. These assistance mechanisms were key  in the resolution of the crisis and are extensively studied by two recent books: The Politics of Bad Options (co-authored by S.Walter, OUP, 2020) and Capitalising on Constraint (co-authored by S.Ladi, C.Moury, MUP, 2021). 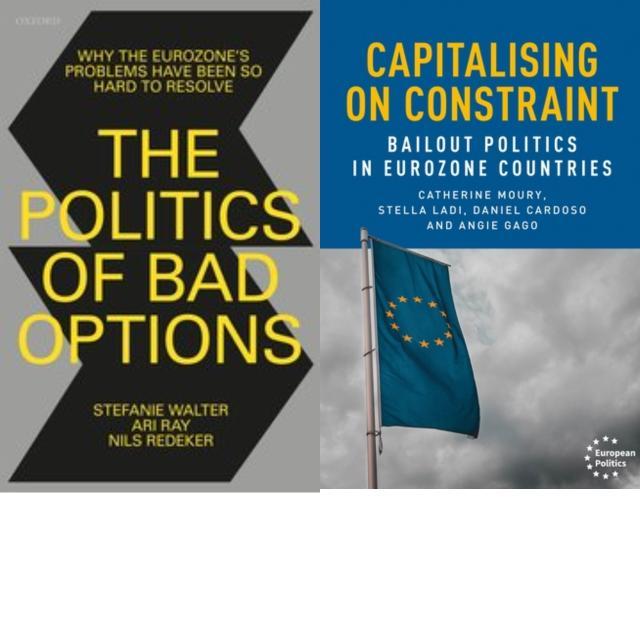 This blog summarises the main content of the book launch. Firstly, methodological approaches and results of both academic works are summarised. In a third part, I report on the final discussion of the conference, which focused on four points, mainly on the future of bailout policies.

The first book, co-authored by Stefanie Walter, The Politics of Bad Options, OUP, 2020, offers to understand why the Eurozone crisis was so hard to resolve. To this end, the authors compare and examine the full range of policy options that were available to policymakers at the time of the crisis. The book thus allows to study both the decisions taken and those not taken and helps to understand the specific choices made by some EU member states. More specifically, the authors identify three “bad options” at the disposal of EU policy-makers when they face an economic crisis: internal adjustment, external adjustment, and financing. Each of these solutions corresponds to a distinctive vulnerability profile, whether deficit-debtor or surplus-creditor. Nonetheless, the most innovative research result of this book is what Stephanie Walter and her co-authors call “the paradox of these politics of bad options”: as bad as the options were, they did not lead to an exit from the eurozone by any member country and these bad options appear therefore probably as the best ones.

The second book, co-authored by Stella Ladi and Catherine Moury, Capitalising on Constraint, MUP, 2021, focuses on the consequences of bailouts and Memorandums of Understanding (MoU, which allows for special cooperation in the event of a major crisis in a euro area country). It offers a more empirical and quantitative analysis of five countries in crisis - Cyprus, Greece, Ireland, Portugal and Spain - to establish a counter-intuitive argument: contrary to what is commonly thought, bailout countries had some form of leeway in the implementation of their national policies. In some cases, bailout countries were even able to capitalise on these “constraint policies”, as illustrated by the easier implementation of new policies, such as a Pension reform in Greece, after the bailout policies. In the configuration in which bailout/MoU policies worked well, the parties in power were able to retain the votes and to gain in electoral credit while the opposition remained thinly spread.

The discussion then led by Matthias Matthijs and Paul Copeland focused particularly on the internal impacts and on the future of these bailout policies, with four main questions.

Secondly, experts discussed the impact that bailout policies might have in the future on the distribution of votes across the left-right axis. According to Stella Ladi, the Eurozone crisis, and the context of the 2010s has greatly changed the left-right division, especially in the crisis countries. Nevertheless, the initial polarisation has not completely disappeared, in some cases it has only been reframed around new actors for example. Traditional political parties have resisted because they sent political messages about learning from the mistakes of the past. In that sense and in line with what is described in their book, Stella Ladi and Catherine Moury used the example of Portugal to show that the left-wing party in power during the crisis was re-elected following a successful bailout policy. This shows, they argue, that success in the face of the recent crisis is always a useful campaigning showcase.

Thirdly, the discussants raised the question of whether the Covid-19 pandemic is comparable to theEurozone crisis. According to Stephanie Walter, the two crises are very distinct. The major difference is that the consequences of the Eurozone crisis were in the end quite clear and known, which is not at all the case for the Covid-19 pandemic. There is now a great veil of ignorance about the future of Covid-19 economic policies, in respect to how and in what way it will affect the Eurozone countries.

Finally, the discussion was extended to European governance in general. Stephanie Walter explained that the Eurozone crisis revealed a weakness in the EU's decision-making schemes as almost no crisis resolution mechanisms were in place when the crisis broke out. The intergovernmental approach was in fact favoured, which on the other hand allowed more room for manoeuvre at national level.

To conclude, this lecture has created dialogues between two innovative researches on  the Eurozone crisis. This rich discussion has raised many questions on the future of bailout policies and their repercussions, particularly on the political life of countries previously in crisis.