Brexit politics in times of pandemic: The growing lack of understanding between the EU and the UK

2020 is a key year for EU-UK talks. By the end of June, the British government has to decide whether it will ask for an extension of the transition period beyond December 31st. This decision partly depends on the outcomes of the four rounds of negotiations on the future of their relations. The uncertainty of this issue has unexpectedly increased as a result of the COVID-19 pandemic, which has had a devastating impact in much of Europe. Anand Menon (King’s College London – UK in a changing Europe), Elvire Fabry (Institut Jacques Delors) and Patrick Le Galès (Sciences Po Paris) offered their views on the consequences of the current situation during a NEXTEUK Jean Monnet Lecture on June 4th and this blog article summarises their main ideas. 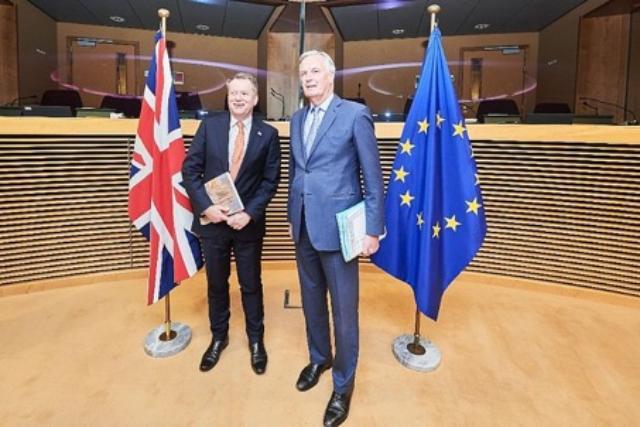 One could have expected a softening of the British position for two main reasons: first, the pandemic has created additional economic difficulties which could be compensated for with a softer position. Second, the development of interventionist policies bringing the EU and the UK closer. Nevertheless, the three experts introduced three main factors why there has been no request for extension in June, meaning a hard Brexit, or even no deal, looks like the most likely outcome: (1) British political games; (2) the poor reputation of the British government in the eyes of European leaders and (3) the actual limited interventionist policies on both sides and the constant disagreements on the level playing field.

The ongoing pandemic raises some questions as to the future EU-UK relations for two reasons. First, the UK is facing a deep recession as a result of both COVID-19 and the economic consequences of Brexit. Second, as pointed out by the experts, there is the issue of the growing role of the State in the UK and the EU which could bring the two partners closer.

Firstly, while prior to COVID-19 the assessment of a no-deal Brexit was a loss of 8 points of global domestic product growth in ten years, the UK will now certainly face a recession of at least 8 points of growth only for the year 2020according to Elvire Fabry. There are those who argue that because COVID-19 has already caused a significant economic disruption in the UK, it is imperative that the UK leave the EU in December rather than delaying it by a couple of years. However, Anand Menon rightly stressed that the opponents to a delayed Brexit have underestimated the economic hit of the withdrawal from the EU. In his view, Brexit will probably augment these economic difficulties, especially in the poorer parts of the country already strongly affected by COVID-19 and that the Prime Minister wanted to level up with the rest of the country. The outcome of Brexit will also outlive the pandemic’s consequences and will create new supply chain and economic problems. In addition, as highlighted by Elvire Fabry, the crisis is disrupting the global British strategy put forward by the government to compensate the lack of access to the European single market. The initial plan prepared by Boris Johnson’s government was to diversify supply chains worldwide, by duplicating and multiplying free trade agreements and trying to gain more access to the Chinese and to the American markets. However, the worsening of tensions between the US and China has given the UK less leeway in negotiating with the US and China (and its South-East Asian partners) at the same time.

Secondly, to answer the pandemic, both the EU and the UK have adopted more interventionist policies and this dynamic could create more convergence in issues such as the level playing field. Indeed, Anand Menon argued that more nationalization in the UK is to be expected just as a shift towards accepting more public debt, greater levels of public involvement and a stronger role of the State (which does not go without contestation from within the Conservative party). On the EU side, Elvire Fabry demonstrated how the European Commission has also acted quickly to depart from the strict rules concerning state aids.

Nevertheless, for the three experts, it remains difficult to anticipate any positive outcome of the EU-UK talks in the coming weeks and even a deal in December. According to Anand Menon, the predicted economic recession does not seem to be a sufficient motive for the British government to be more flexible. Boris Johnson’s government is more concerned with winning the next elections than anything else, even economic common sense, and extending the transition period could damage his reputation in the eyes of the electorate. Indeed, the unique selling point of Johnson is that he is a man who delivers what he says on Brexit and this utter predominance of politics was not altered by COVID-19. Furthermore, Anand Menon argued that by emphasizing the shared value of “we will not tie ourselves to EU standards”, the current government is able to hold the Tories coalition together over the years while pushing into the background the divergences within the Conservative party on economic policies. This is even more true now the UK is trying to recover from the COVID economic shock as Tories have shown internal divisions regarding opinions on the lockdowns and economic solutions.

This strong politicization of the EU-UK negotiations is not entirely new for Patrick Le Galès. Several times in the past few years the negotiations have been blocked by ideological concerns. What has changed though he stressed is that the momentum of the British election is now completely gone and the UK reputation has been hit very badly by everything that has happened over the last months. Boris Johnson now appears as an unreliable partner for Europeans who understood this is a very political government and he would do whatever it takes to be reelected. On the one hand, some of the promises of Boris Johnson’s government have not been kept in regard to environmental norms or the access for migrants to Europe. On the other hand, his reputation has been seriously damaged by the COVID-19 management crisis due to the Johnson government’s triumphant declarations about how the UK was well-prepared compared to other countries, and his will to stay out of the EU game with China or the regionalization of supply chains. Few weeks after, the expectations of the UK doing better have completely collapsed and showing the difficulties UK will face on its own.

With regard to interventionist policies, Patrick Le Galès casted some doubts on the UK’s capacity to deliver meaningful policies due to the state of the British economy and the bad shape of the British state apparatus. However, Elvire Fabry pointed out that the EU itself has been very cautious to frame the exemptions allowing state aids and has attached strict conditions to it. Indeed, according to her, Europeans are betting more than ever on the single market as an essential element for the recovery and as a way to reassure supply chains, to take back control of production. Thus, their position since the beginning of this crisis has been to avoid the fragmentation of the single market and to defend the level playing field. Elvire Fabry envisages few reasons to expect Europeans to be softer in the post-Brexit negotiations on that major issue of the talks.

In definitive, Elvire Fabry argues that since the beginning, the Brexit talks can be compared to a game of ‘chicken’ as both parties sticking ardently to their chosen position, waiting for the other to concede. For all three experts, now that both EU and UK politicians seem to have more important things to worry about than Brexit, their willingness to compromise is even less. The deterioration of the cooperative spirit between the EU-UK and the quick fading away of the historical trust the European partners had in the UK are of serious concern for the three experts. Indeed, Brexit is only the first step of the future of EU-UK relations. The two sides would need to work together in the future on various issues (terrorism, foreign policy, defence, data transfer etc.). Yet, without a cooperative approach, how can the two parties expect to make complex decisions in difficult situations? Such a question is even more pertinent with the uncertainties surrounding the future of the EU. Despite the important risk of fragmentation created by COVID-19 and the unilateral initiatives of lockdown, the activation by the EU of all the possible instruments to address the pandemic and to allow a quick economic recovery reflect a high level of cohesion in Elvire Fabry’s eyes. However, Patrick Le Galès highlighted the abyssal absence of the EU during the first weeks of the crisis, the lack of collective answer and the discourse from the European Commission, the first reactions of the Netherlands when Italy and Spain were hit very badly and how they led to a fantastic rise of anti-European feelings and opinions in Italy, in Spain and to a much lesser extent in France (some statistics are available here and here for a monthly evolution). If the situation has evolved since due to the decrease of the pandemic and the answers brought by the EU, there is still a risk of systematic backlash in election rounds with potential changes of majority straight away in domestic elections which could lead to a very complex situation for the EU.