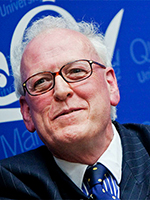 Peter Hennessy is Attlee Professor of Contemporary British History at QMUL. Before joining QMUL, Professor Hennessy was a journalist for 20 years, including as a leader writer and Whitehall correspondent with the Times, and as lobby correspondent for the Financial Times. He wrote a regular column for the Independent and was a regular presenter of the BBC Radio 4 Analysis programme.

Professor Hennessy’s analysis of post-war Britain, Never Again: Britain 1945–1951, won the Duff Cooper Prize in 1992 and the NCR Book Award in 1993. His study of Britain in the 1950s and the rise of Harold Macmillan, Having It So Good: Britain in the 1950s, won the 2007 Orwell Prize for political writing. In 2010, Peter was appointed as a non-political crossbench peer, taking the title of Baron Hennessy of Nympsfield. He continues to make regular contributions to the press, radio and television.