An excerpt from Chapter 2 – ‘The Fall of the First Reconstruction’, The End of the Second Reconstruction by Dr Richard Johnson (Polity, 2020) 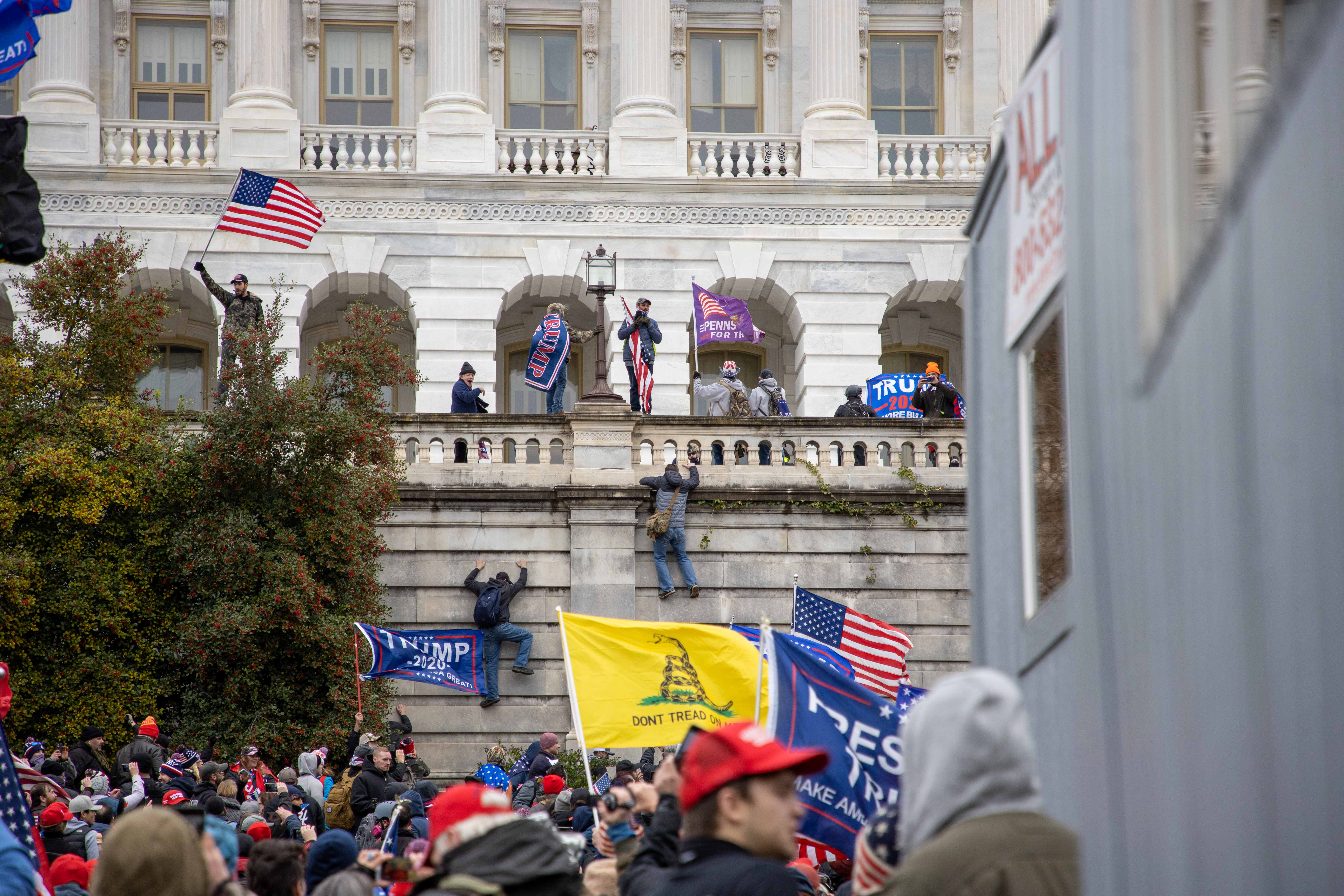 In the comparative political science literature, when democracies fall, violent, anti-democratic insurgencies are often to blame. The nineteenth century United States was characterised by multiple violent insurrections designed to topple legitimately elected local and state governments and to crush political opposition through intimidation and force. As Reconstruction failed, top-level institutions continued to function ‘as normal’. Presidential elections continued to happen on time. The stars and stripes were not replaced with the stars and bars. For many Americans, there was little discernible change.

However, quietly (to whites, in any case) democracy in the United States was being dismantled. Multiple US states fell to anti-democratic coups. Public officials who did not subscribe to the new regime of white supremacy were murdered, removed from office, or made into political refugees. Voters were terrorised and blocked from voting or standing for office. The physical infrastructure of the multi-racial democratic sphere – black churches, schools, and printing presses – were burnt to the ground. Rightfully elected public officials were blocked from taking office. Anywhere else in the world, these acts would be viewed as hallmarks of a violent overthrow of democracy, and we should apply the same standard to the United States.

The strategy of violence to undermine Reconstruction operated at multiple levels. First, there were the high-profile assassinations. The biggest of these prizes was, of course, President Abraham Lincoln. But, many other elected officials were murdered by political opponents. The period saw the first assassination of a sitting Congressman. The pro-civil rights Congressman James Hinds was shot dead in the street by the secretary of his county Democratic Party. One of the key architects of Georgia’s Reconstruction constitution was murdered in his bedroom by the Ku Klux Klan (Daniell 1975).

While records are patchy, among African American elected officials during Reconstruction, at least 12 state legislators, 8 state constitutional convention delegates, and one state party chair were assassinated (Foner 1993). The Ku Klux Klan and other white supremacist groups effectively operated as paramilitaries of the Democratic Party. Democratic activists and Klan members were often indistinguishable in some parts of the South. As Keeanga-Yamahtta Taylor (2008) writes, ‘When they [Democrats] could not win the vote, they simply shot and killed Black officials and replaced them with white men’.

The assassinations were designed to intimidate office-holders and deter others from standing for election. The credible threats of murder and maiming by white Democrats forced Republican politicians to resign and flee their states, moving to the North as political refugees. At least three Republican governors were disposed of in this way. After the Ku Klux Klan garrotted to death a Republican state senator in the Caswell County Courthouse, William Holden, the governor of North Carolina, deployed the state militia to restore order and ensure the security of the local African American population. In response, Holden was impeached by the Democratic state legislature – the first removal of a governor by impeachment in US history -- and was forced to flee North Carolina for his own life (Kousser 1984). In a similar set of circumstances, Adelbert Ames, the Republican governor of Mississippi, resigned under threat of violence in 1876 and fled to Minnesota. The Democratic state legislature first impeached Ames’s black lieutenant governor to ensure that Ames was not replaced by an African American (Anderson 1981).

The violence also had a policy impact. Whites who were sympathetic to black political inclusion began to withdraw their support out of fear of deathly repercussions. This was shamefully exhibited in the Georgia state legislature, when some white Republicans joined with Democrats to vote to expel all thirty-three African American members of the legislature. Around this time, the Republican governor of Georgia, Rufus Bollock, was pressured by the Ku Klux Klan to resign. He fled to the North, fearing for his life. White Republicans became increasingly hesitant to support black civil rights out of fear of violent political retribution.

This elite-level violence only hinted at the extreme violence targeted towards ordinary party activists, especially black Republicans. Almost as soon as the Civil War was over, whites engaged in mass killings of African Americans. The Freedmen’s Bureau in 1866 estimated that in the one year it took before establishing itself in Texas one thousand blacks had been murdered in retaliatory violence by whites. In July 1866, thirty-eight black political activists were gunned down by local white police in New Orleans (Hogue 2006). In reaction to the presence of black federal soldiers in Memphis in 1866, a white riot erupted: the mob murdered 46 black residents, raped five black women, and burned all 12 of Memphis’s black schools, four black churches, and 91 homes. The head of the Secret Service Hiram Whitley estimated that ‘23,000 persons, black and white, were scourged or murdered by the Ku Klux Klan within 10 years following the close of the rebellion’.

Violence was most manifest around elections, underscoring the political (and fundamentally anti-democratic) dimension of these actions. In the 1869 municipal elections in Mobile, Alabama, white Democrats wheeled out a piece of field artillery and trained it on a large crowd of African Americans who were queuing to cast their votes. The Alabama State Journal outrageously described the crowd as ‘timid’ because ‘hundreds left the place as fast as possible’. In the 1874 elections in the same city, white horsemen rode through the streets shooting black men who were on their way to the polls. Across the South, party activists’ bodies could be found drowned in rivers or hanging from trees. Because voting was not secret (and would not be in some southern states until the 1950s), any person who dared to vote Republican could easily be singled out. In one Louisiana parish, in the face of threats from white Democrats, (only) one individual cast his vote for Republican candidate Ulysses Grant. He was murdered that night (Christensen 2012).

White terrorist violence was not limited to election day. Any expression of black power was met with violent resistance. This became much worse when the federal government withdrew its presence from the South, leaving African Americans to the mercy of white mob justice. Over two-thousand black men were lynched after the federal government departed the South in 1876 (Kato 2015). Between 1885 and 1907, there were more lynchings than legal executions in the United States (Whitefield 1988: 101).

In 1887, black sugarcane workers in Thibodaux, Louisiana went on strike. The labourers were paid in ‘tokens’ which could only be redeemed in the plantation shop owned by their employer. The farmers were members of the racially mixed Knights of Labor, the biggest union in American history. One in five American workers were members of the Knights at the time, double the proportion of Americans today who are a member of all unions put together. Cognisant of the farmers’ collective potential, the plantation owners sought to suppress the strike as robustly as possible. They hired white strike-breakers to attack the black sharecroppers; about fifty were murdered as a result. One plantation owner mused, ‘I think this will settle the question of who is to rule -- the nigger or the white man -- for the next fifty years’ (DeSantis 2016). It was sufficient to kill off most attempts to unionise black sharecroppers until the Second Reconstruction, with the exception of the Communist-led unions in the 1910s-30s whose efforts were similarly met with murderous response (see Gilmore 2008).

Dr Richard Johnson is a Lecturer in US Politics and Policy at Queen Mary University of London.