The UK’s public admin failure: round up the unusual suspects? Professor Hugh Pemberton

At last week’s Conservative party conference, Lord Agnew – a British government minister involved in civil service reform – echoed Dominic Cummings’ many attacks on the service for its over-centralisation, mediocrity, risk-averseness, inefficiency, failure to generate workable policy ideas acceptable to ministers, and lack of effectiveness in policy delivery. But he also pointed us to history. 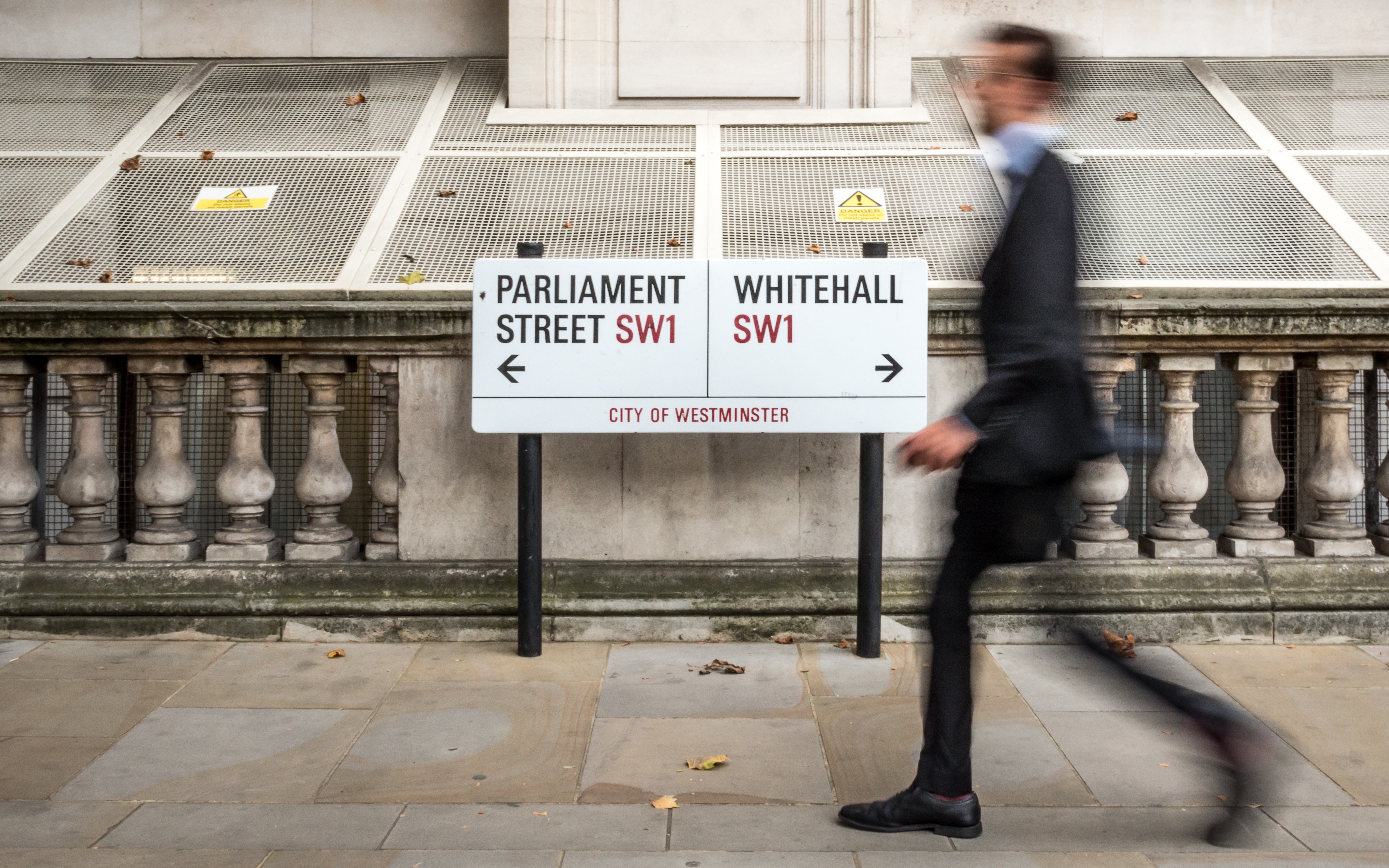 Image of street signs for Parliament and Whitehall.

Agnew’s particular target was the 1854 Northcote-Trevelyan report – the attachment to which within the civil service he saw as symptomatic of its failure to modernise.

It’s true that Northcote-Trevelyan is treated reverently in civil service mythology – whereas I think it’s is better to see it as part of a long process of modernisation across the long-nineteenth-century. During that process, which began under Pitt the Younger, political patronage, corruption, nepotism, incompetence, and inefficiency were gradually driven out of British public administration. As it unfolded, the Victorians sought to build a permanent service able to work efficiently to deliver the policies of governments of different political complexions via an attachment to Northcote-Trevelyan’s core values of integrity, honesty, objectivity and political impartiality

In truth, it took a long time for the service to be remodelled, and it wasn’t until the First World War that a recognisably non-partisan modern civil service really emerged, a change capped by the 1918 Haldane Report. Haldane recommended that the greater complexity of modern government required organising departments around functions, improving inter-departmental coordination and accountability to Parliament, and a deeper partnership between Ministers and officials. That system was gradually implemented – reaching its apogee in the decades after the second world war, when ministers and civil servants worked in what now seems like glorious harmony.

From the 1960s, however, the tide turned against the civil service. A key reason was that the UK’s relative decline started to push the Conservatives and Labour apart ideologically – each party wanting radical if different solutions to revitalise the British economy and restore the country’s former status. It also started a political search for a scapegoat for decline. Athough the major political parties differed markedly in their prescriptions for reversing decline they were united on one thing , civil servants were no longer seen as part of the solution to a problem, they were the problem.

The shift was first evident in the 1968 Fulton Report with its criticisms of arts-educated generalists and poor training.

Since then the civil service has experienced successive politically inspired upheavals. For example, from 1964, the service adapted itself to the advent of special political advisers (SPAD)s, and as their use proliferated so it gradually accepted a much-reduced role for itself in advising ministers. In this new world ministers turned increasingly to their SPADs and to sympathetic think tanks for policy ideas – the role of the civil service was increasingly restricted to turning those ideas into delivered systems.

With the Armstrong Memorandum of 1985 the service accepted it had no constitutional position distinct from that of the government of the day and that, in consequence, its function was simply to do the bidding of ministers. The idea that the service, through its permanency, amounted to a sort of ballast within the constitution is therefore long gone.

From 1979, the civil service also responded to a return to a political focus on ‘efficiency’. Consequently, the number of civil servants contracted by nearly half between 1979 and 2015 (from around three-quarters of a million ‘full-time equivalent’ staff, to under 400,000) before subsequently expanding to deal with Brexit.

The service was also subject to major structural change. It swiftly decentralised in the early- to mid-1990s – when three quarters of all civil servants were moved out into ‘executive agencies’ which were managed at arms-length by their sponsoring Whitehall department but responsible for their own day-to-day management. The service subsequently recentralised as it became clear that decentralisation was: a) leading the centre to lose touch with reality on the ground; and b) creating political problems as the media and MPs continued to hold ministers to account for devolved responsibilities

The civil service also adapted to a new world of privately provided public services. That process was driven by the Conservative government under John Major in the early-1990s but then continued despite abundant evidence that contracted out services were on average no better than those delivered by the public sector (indeed were often worse), were actually more expensive, and were more inflexible than services delivered directly by civil servants because of the need to manage them contractually.

Despite this torrent of reform, and clear evidence that the civil service is both open to change and willing and able to achieve it, there has been no let-up in political complaints about the service’s ability to deliver what ministers want.

Are concerns today about the civil service justified?

Some of the complaints about the service made by ministers and advisers, and by right wing commentators, are undoubtedly justified.

For example, Covid-19 has demonstrated quite severe shortcomings in civil service capability – although we should note that the UK’s is not the only system of government to have been found wanting, for Covid has essentially revealed the particular weaknesses in the governments of many countries.

Complaints that there is a lack of central control of what has become a highly complex and very fragmented system of government are almost certainly justified. And it is also clear that long-term strategic management from the centre is poor, with too much attention to fire-fighting the pressing problems of the day and too little focus on long-term needs.

It also seems fair to say that half a century of trying to correct the domination of the senior civil service by Arts-educated generalists has not been notably successful – the Fast Stream remains problematic. Moreover, despite good progress in recent years, its intake is still less diverse in terms of socio-economic status and ethnicity than is desirable (diversity helping not just to make the civil service look more like the population at large but also less subject to group-think) – though there is a much more positive story to tell on gender.

Because so many policy staff (which represent around six per cent of all civil servants) are based in Whitehall (broadly defined) it’s probably also fair to say that this group is still very London-centric in its lived experience, and perhaps sometimes not that aware of how life is lived in the rest of the country.

It also seems unarguable that complaints, for example by Michael Gove in his Ditchley speech earlier in the year, about the insane whirligig of staff whizzing between and within departments as they navigate the promotions process are justified. The speed with which staff change roles is surely bad for skills development within the service as a whole.

And some departments, notably the Home Office, as Wendy Webster’s recent report on the Windrush scandal shows all too clearly, are plainly dysfunctional (something that has been true of the Home Office for many decades).

Is it fair to blame failures in UK public admin on the civil service alone?

Other culprits also spring to mind.

For example: ministers. Over the past forty years ministers have embraced a doctrine of what one might call ministerial supremacy. They call the shots, perhaps they should also be in the frame when we’re identifying sources of failure? And might many of the complaints ministers make about arts-educated generalists with inadequate skills for the role they are performing not apply equally to many ministers ? Perhaps we might also ask just how much ministers and advisers know about the work of their departments? They see the bit of the iceberg above the water – typically their private office, at most those civil servants who work on policy (which is just six per cent of all civil servants); how much do ministers and advisers actually understand the day to day reality of departmental service delivery?

And then there’s Parliament. For decades MPs have accepted the growing power of the executive – not least because of the growth of the payroll vote. Perhaps if MPs more effectively held government to account its quality might improve? The House of Commons also does a pretty poor job of legislating – producing a deluge of often poorly drafted, contradictory and/or expensive-to-adhere-to regulation. There is a limit to the House of Lords’ ability to correct this. Perhaps that contributes to poor public administration?

Might we also worry about the increasing number, and power, of unelected special political advisers (SPADs) and politically appointed officials (such as Dido Harding and Lord Frost)? This has been an increasing feature of government since 1997. Does it mark a return to the political jobbery of ‘old corruption’? How qualified are such people, and how democratically accountable are they? Are we happy that SPADs are ministers’ principal source of advice, rather than the civil service with its values of integrity, honesty, objectivity and political impartiality? Do SPADs speak truth to power, or do they act as cheerleaders for poor policy?

Then there is the broader constitution. Over the past fifty years a series of major constitutional changes have unfolded in a remarkably unplanned way and without much consideration of their impact, or thinking about whether consequential changes to democratic practices and public administration might be in order. For example, fewer people live in Scotland than the North-West, does the latter’s lack of an equivalent regional administration place it at a disadvantage and lead to a mis-allocation of government attention and financial resources?

We’ve also acquired an increasingly ‘presidential’ style of politics, but without recognising this constitutionally, or putting in place checks and balances on prime ministerial power.

And what are the consequences for the quality of government of a voting system that in recent decades has delivered majority governments which command a low percentage of voters – in the lower 40s and even 30s per cent – but behave as if their will is that of an overwhelming majority of voters. Is that not a realisation of Quentin Hogg’s warning of ‘elective dictatorship‘.

Finally, there is the overwhelmingly London-centric nature of English civil society – its print and broadcast media, finance, NGOs, and so on are overwhelmingly London based. Does this feed through into poor government? For example, does it degrade local and regional politics, and accountability? Does it lead to excessive pressure for spending on London and the South East (think, for example, of the large regional differentials in spending on public transport per head)? Does it lead to a lack of knowledge of other areas, and a lack of sympathy for their inhabitants?

In short, if we are to have a revolution in British public administration, it would help if we understood the history of how we got to where we are today. What that history tells us is that the past half century has seen both constant change in the civil service yet no let up in attacks on it as the cuase of government. That suggests the problem might not just lie with civil servants. So let’s not, yet again, set out on reforming the civil service withough thinking about whether that might need to be accompanied by a wider overhaul of political and cultural institutions, and of our constitution.

Finally, history suggests that change is always easier to achieve if ministers work with civil servants rather than against them. But I think another lesson might be that change is more likely to endure politically if it emerges from a process that is about building consensus rather than simply adversarial.

A video of the Mile End Institute Webinar ‘A Hard Rain’? Reforming the Civil Service is available here.

This piece was originally published on Hugh Pemberton’s personal blog.