With the UK in lockdown and Covid-19 still on the rampage, it is easy to lose sight of the looming deadline for Britain and the EU to avoid a no-deal Brexit. Talks between Brussels and London have stalled and no progress on the key issues has been made. 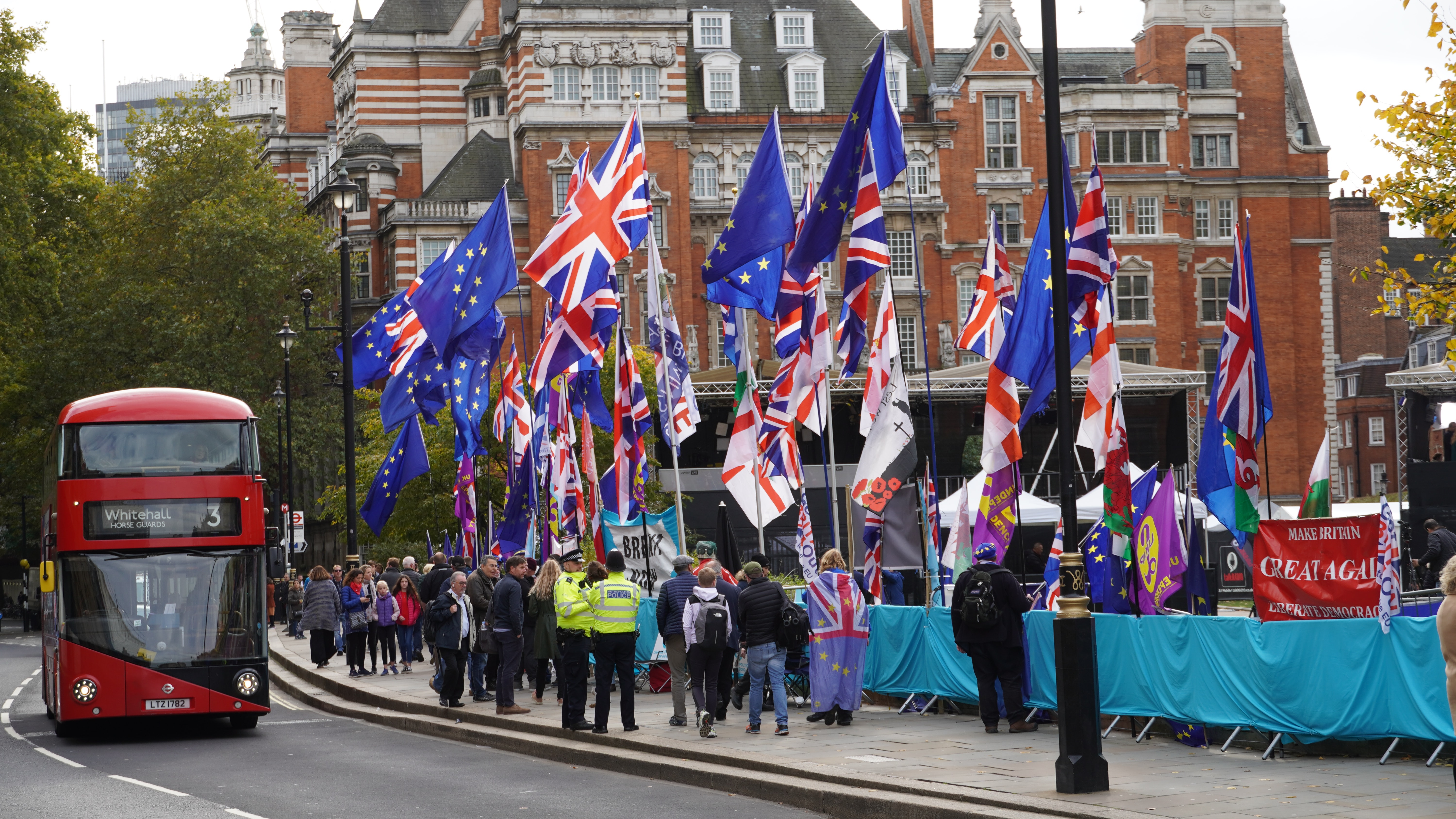 Picture of a group of anti-Brexit campaigners in Westminster.

Photo by Franz Wender on Unsplash.

It is clearly not the outcome hoped for by those who, in the aftermath of the UK’s referendum in June 2016, took to the streets in their thousands to protest against Brexit.

Within months after the referendum, up and down the country, every Saturday morning, street stalls would be hastily erected and EU flags unfurled; the so-called ‘Brexitometers’ and the blue and gold insignia were ubiquitous features of our cityscape.

Key questions of our on-going research project are: who were these activists and how were they organised?

The anti-Brexit movement has been continuously evolving over the last few years into a complex network of various affiliated groups. The only overtly pro-European organisation with a long history was the European Movement.

However, despite being established in 1949 and playing a role in the 1975 referendum, its local branches were largely dormant, and its capacity to campaign and mobilise a wide demographic was limited.

When the referendum was announced, the London-based Britain Stronger In Europe, also known as Stronger In, was assigned to lead the campaign for the UK to remain in the EU.

Other pro-European organisations that were founded prior to the referendum included Scientists for EU and the left-liberal Another Europe is Possible. 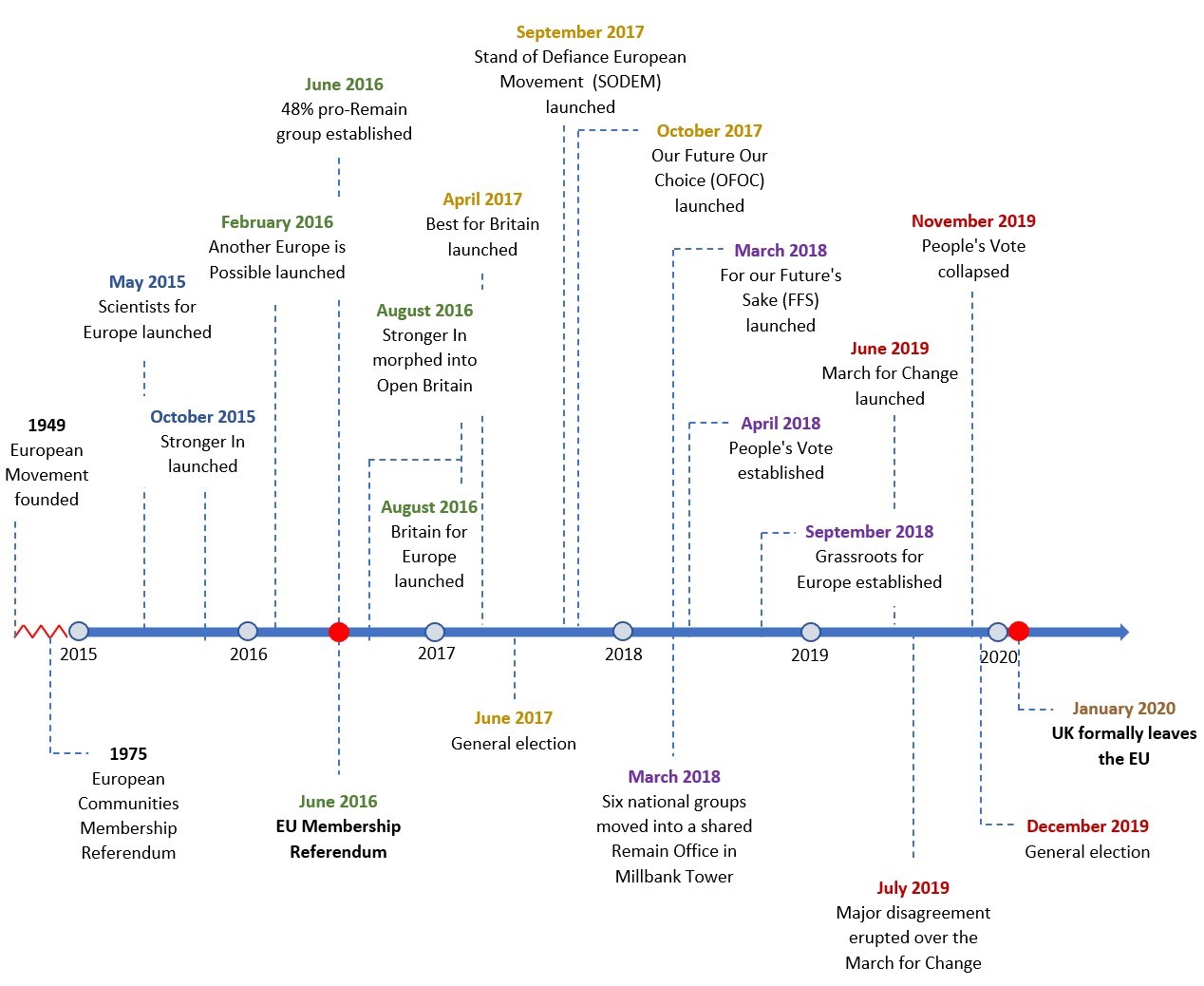 Timeline of anti-Brexit mobilisation in the UK

The anti-Brexit movement that emerged after the vote, however, was largely new. Most activists we interviewed admitted they did not engage in any campaigning activities in the run up to the Brexit referendum. It was the result that shook a considerable number of people into activism.

The pro-Remain group The 48% constituted a more or less immediate (online) reaction to the referendum outcome, and within several months after the vote a plethora of small grass-roots organisations emerged, associating themselves with the nationwide Britain for Europe network or the European Movement.

Organisations operating alongside these umbrella organisations included Open Britain (a re-boot of the Stronger In campaign), Best for Britain, Stand of Defiance European Movement (SODEM), and the young people-led For our Future’s Sake (FFS) and Our Future Our Choice (OFOC).

These organisations formulated their own specific aims and reached out to different audiences.

Although there was undoubtedly a certain degree of cooperation (sharing know-how, preparing joint protests etc.), it was not until April 2018 and the launch of the People’s Vote campaign that a concerted effort was made to bring together major pro-European organisations.

The People’s Vote slogan and campaign served both as an umbrella organisation and a common platform for various anti-Brexit organisations, including many of those previously mentioned, that obtained office space in London’s Millbank Tower.

The organisation coordinated several large marches in London from late 2018 onwards that attracted hundreds of thousands of people.

Through their affiliation with Britain for Europe or the European Movement many local organisations were brought under the umbrella of the People’s Vote campaign.

Yet for many, this did not seem to deliver much in terms of resources and support, and local groups were reluctant to adapt their campaigns, and increasingly defensive of their autonomy.

Local activists praised People’s Vote for its ability to attract celebrity endorsement and send out a positive message (for another referendum, instead of against Brexit), but also criticised the central organisation for being London-centric, aloof and politicised.

Such grievances triggered the establishment in September 2018 of the Grassroots for Europe network, which sought to cater to the needs of local anti-Brexit organisations.

When we purely focus on its organisational characteristics, the ultimate failure of the movement to halt Brexit can be related to a) its limited capacity, and b) a lack of organisational cohesiveness.

First, despite an augmented capacity to organise demonstrations and other quite large actions, the local networks remained conspicuously small (10-25 people) in terms of the number of core activists and strategists.

Driven by a desire for solidarity and by an apparent absence of an established pro-EU movement organisation, they mobilised their neighbours, colleagues and friends via social media.

Most activists were typically engaged in leafleting and manning street stalls, and coordinating travel to larger national demonstrations. Such actions were unlikely to convince an audience beyond an already pro-Remain demographic.

Second, the anti-Brexit campaign faced some serious organisational problems. There occurred several instances of rebranding, mergers and splits of various groups, and suggestions of quite stark ideological differences, all of which undoubtedly had an impact on the effectiveness of the movement.

The emergence of the national People’s Vote campaign also fuelled a considerable degree of factionalism and fragmentation that ultimately weakened the efficacy of the broader movement.

One notable bone of contention was the choice between merely demanding a second referendum and pursuing a more unambiguous anti-Brexit strategy. Towards the end of 2019 the People’s Vote campaign faced serious internal disputes, and practically collapsed.

It is, however, important to stress that the anti-Brexit movement was confronted with an enormous task of trying to challenge, in an extremely short space of time, deep-seated and widespread Euroscepticism, and the negative messages that had dominated the British debate on European integration for multiple decades.

In this regard, the movement’s achievements were no small feat. For the first time in this country, large crowds of people came out, often draped in European flags, to defend EU membership.

However, while the issue of the UK’s relationship with the EU is unlikely to disappear from the political agenda, it is uncertain whether what is left of the anti-Brexit movement is able to place its mark on the eventual outcome.

Video-calling with key activists several months after the UK’s formal departure reveals that the quest for re-joining is considered a ‘long game’.

Extending the transition period, in the short term, and staying as close to the EU as possible, in the medium term, are now the key goals of those activists who refuse to be disheartened by the last general election result and the practical challenges posed by the Covid-19 crisis.

This piece was originally published by The UK in a Changing Europe.