On Public Health, Johnson’s First Year Has Been Catastrophic. His Second Could Be Worse. Professor Sophie Harman 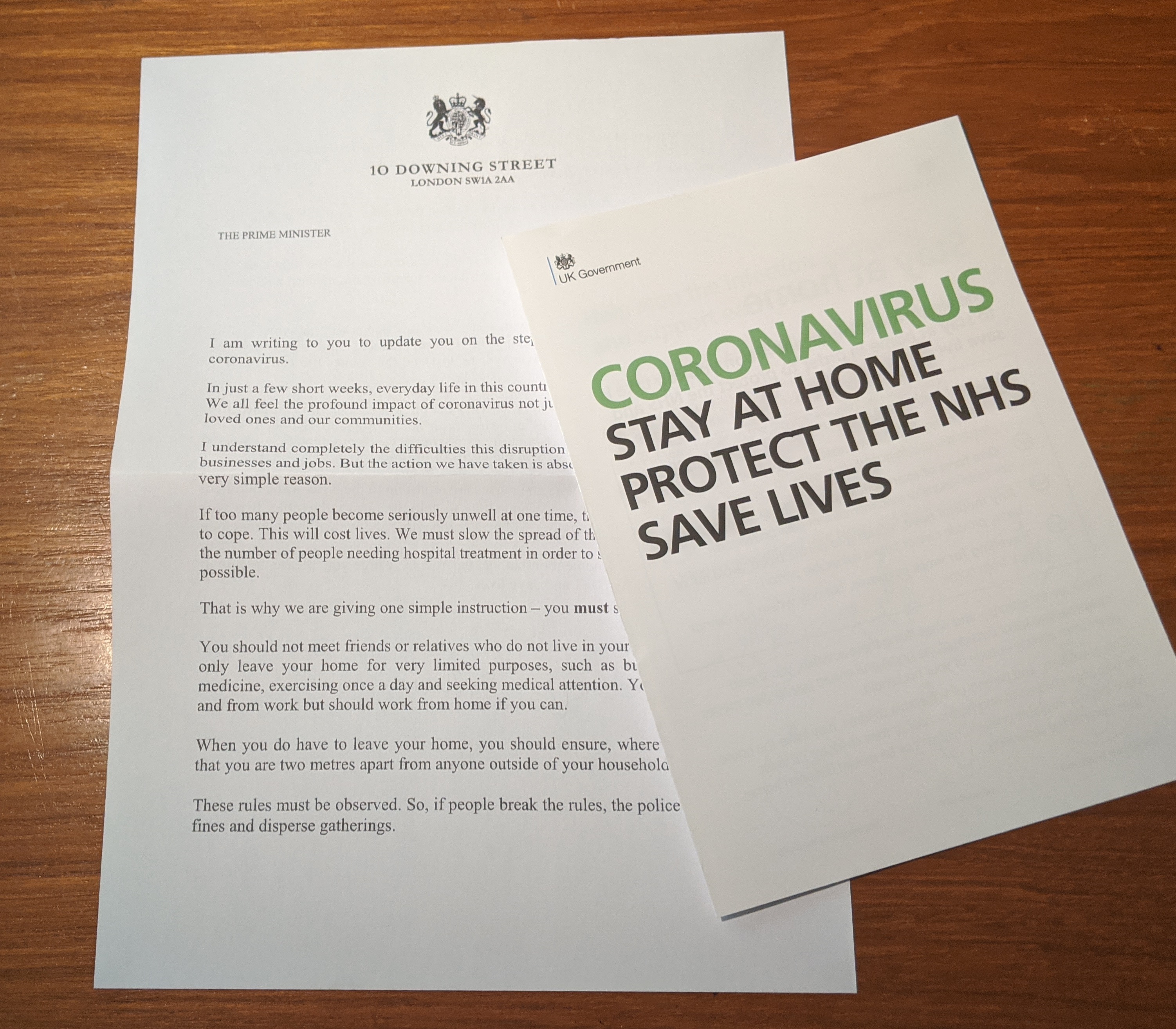 Picture of the official UK Government correspondence sent to every home in the United Kingdom during the Coronavirus pandemic.

Political leaders are bad at global health emergencies. This has been true from HIV/AIDS, to Ebola, to COVID-19. There are of course notable exceptions to this rule: current praise for Jacinda Ardern, Angela Merkel, and Moon Jae-In and individual health and regional leaders suggest that it is possible to have good political leadership during a global health crisis. More common are leaders who falter at the start of the crisis - having under-estimated the risk or unsure as to the extent of the problem, or just plain fear of what is going to happen – but then quickly adjust, adapt, and learn from early mistakes. And then there are those leaders that start and end badly, whose catastrophic responses over-shadow any successful response models. Boris Johnson falls into this latter category.

There are five traps political leaders can fall into when it comes to a public health emergency: 1. delay and downplay; 2. fudge the science; 3. isolation from the international community; 4. absence; and 5. double standards. One year into his leadership, Boris Johnson has fallen into most of these traps. Under his leadership, COVID-19 went from a public health crisis to the biggest long-term shock to UK life since the Second World War, with significant consequences for the livelihoods and well-being of future generations. It did not have to be this way.

The first trap has the most serious consequences for people’s lives. There was the throwaway comment about coronavirus during a speech in February, then there was some standard stalling with added reassurances about the NHS, before a blunt reassessment of the severity of the virus come early March.

The problem here is not so much what Johnson was saying, but what his government was not doing: no build up and distribution of personal protective equipment (PPE) to where it was needed; no advance preparation for what a lockdown would entail; no protection of people in care homes. There are a couple of basics to responding to health emergencies, and one of the biggest involves protecting your frontline health and care workers as they are going to be most vulnerable. By March, Johnson could not downplay the risk, noting: ‘I must level with the British public: many more families are going to lose loved ones before their time.’ What he did not note is how government delay causes deaths of loved ones before their time.

The second trap – fudging the science - is the most contested. Johnson arguably did not fudge the science, he opted for one scientific strategy – herd immunity – while not following standard models of public health response: track and trace the virus, protect your health and care workers, protect your most vulnerable in society (do not send them to care homes where they are most vulnerable), effective community mobilisation to change behaviour. Calls for these measures were made but were ignored. Johnson did follow the science when new evidence suggested that if he did not change course, the UK might face 500,000 deaths from COVID-19, and rapidly made the decision to lock the UK down. However lockdowns are really a measure to buy time for other public health measures to work: notably, a functioning track and trace system, effective behaviour change communication, and proper healthcare supplies. To date, track and trace in the UK is still not fully functioning.

Johnson politicised science and scientific advice. This led to questions about the quality of evidence and independence of SAGE by the wider scientific community (and in part to the founding of the Independent SAGE). This has serious consequences for the response to an evolving virus: lack of public trust in government evidence, poor judgment of political leaders in their assessment of the evidence, and at worst the understanding that scientists had to justify rather than inform political decision-making.

Johnson’s record on the third trap – isolation from the international community – is mixed. Unlike Donald Trump, Johnson has thus far avoided blaming the international community, most notably the World Health Organisation and its relationship to China, for the failures of the UK COVID-19 response. The merging of the Department for International Development (DfID) with the Foreign and Commonwealth Office (FCO) in June could highlight a shift away from some of the wider global health and development work undertaken by the UK. It is too soon to tell what this means for future UK engagement with global health security, other than perhaps a fundamental misunderstanding of how global health security works: invest in pandemic preparedness in low and middle income countries to protect all.

The big kicker on the international isolation front, is predictably Europe-related, with the UK opting out of the EU COVID-19 vaccine scheme, meaning the UK will do its own negotiation with vaccine suppliers should a vaccine become available. For those unfamiliar with the wider politics of vaccines, this is where multilateralism around global health security will get really nasty. Finding a vaccine for COVID-19 is relatively easy when compared to arrangements for equitable and universal access around the world.

The fourth trap – absence – is more sombre, given Johnson’s critically ill-health and hospitalisation from COVID-19. To be absent from leading the national response to a health emergency because of your ill health is definitely to be forgiven. Near-death experience and new parenthood would usually combine to boost public empathetic support for a Prime Minister. However the manner in which Johnson’s health was managed seemed to do two things: first, compound concern about trusting information from Number Ten; and second, raise new unease as to who was in charge – special advisors, Dominic Raab, or Matt Hancock – and whether they were up to the job. Johnson may be bad but he seemed better than his temporary replacements.

The final trap is the real headache for Johnson and the Conservative Party: double standards. People can rationalise the first four traps as an extreme situation faced by a government trying its best: however, as a recent The UK in a Changing Europe study suggests, the perception of ‘one rule for them and another for us’ is an issue for UK voters. Despite special advisor Dominic Cummings’ attempt at obfuscation through excessive detail in the Rose Garden, the British public know that the lockdown rules were simple and that he broke them; and that, in allowing him to keep his job, Johnson signalled that he was okay with that. This may not impact on Johnson’s electoral fortunes in the next General Election but it may be a legacy issue for the Conservative Party.

Simply put, the high UK incidence and death rate could have been avoided. There will be investigations, reports, inquiries, and countless blogs like this that will investigate government liability, accountability, and failure and the appropriate consequences of this. For his next three years in power, Johnson needs to avoid the future traps of pandemic recovery: avoiding accountability and apportioning blame to the wrong sectors of government (reducing efficacy in pandemic preparedness planning); failure to invest in the pillars of pandemic response (care sector, local authorities); and isolation from multilateral co-operation on global health security. The first year of Johnson’s leadership has been catastrophic. With a new wave of COVID-19 and economic crises imminent, his second year could be a lot worse.

Sophie Harman is a Professor of International Politics at Queen Mary University of London where she teaches and conducts research into global health politics. Her current research on women, gender, and global health is supported by The Leverhulme Trust.