Professor Sophie Harman has contributed to new polling analysis which reveals the pressure on Black, Asian and minority ethnic (BAME) women during the coronavirus lockdown. 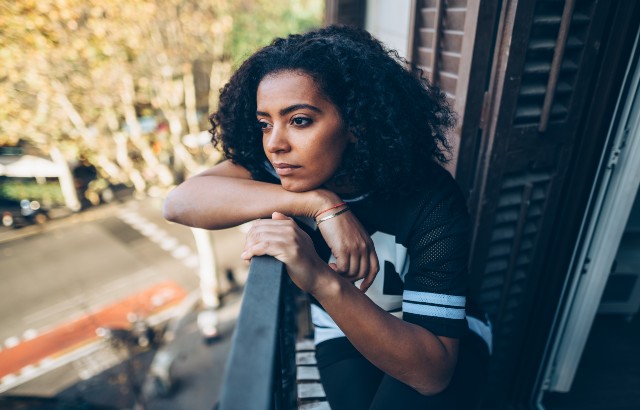 Image of a woman on a balcony.

Professor Sophie Harman from Queen Mary's School of Politics and International Relations contributed towards the analysis by the Women’s Budget Group, Fawcett Society and London School of Economics.

The analysis shows that half of disabled or retired BAME women say they do not know where to go for help during the current pandemic and 45 per cent of BAME women are struggling to cope with demands on their time.

Over half (51 per cent) of BAME women say they were not sure where to turn for help compared with one in five (19 per cent) white women.

This is despite the fact that BAME people have been found to be more at risk during the pandemic. The recent Public Health England review confirmed that the risk of dying among those diagnosed with coronavirus is higher within BAME groups than in white ethnic groups.

Unequal pressures are also being felt at work and at home. BAME people working from home are more likely to say they are working more than prior to lockdown, with four in ten (41 per cent women and 40 per cent men) agreeing compared with three in then white people (29 per cent women, 29 per cent men).

The analysis from Women’s Budget Group, Fawcett Society, Queen Mary University London and London School of Economics shows that these health impacts are just one of the many disproportionate impacts the pandemic is having on BAME people. The physical, psychological and financial impact of coronavirus is being felt sharply by the BAME community and in particular amongst BAME women.

Concerns about debt are disproportionately high among BAME women. Nearly 43 per cent said they believed they would be in more debt than before the pandemic, compared to 37.1 per cent of white women and 34.2 per cent of white men.

Nearly a quarter of BAME mothers reported that they were struggling to feed their children (23.7 per cent compared to 19 per cent of white mothers).

Over twice as many disabled or retired BAME women and men reported that they had recently lost support from the government (42.5 per cent and 48.3 per cent) than white women and men in these groups (12.7 per cent and 20.6 per cent respectively).

BAME respondents in this group were also more likely to say they had lost support from other people (48.3 per cent BAME women compared to 34.0 per cent white women) and were less likely to say that there were people outside of their household who they could rely on for help (47.4 per cent compared to 57.2 per cent).

A wake up call

Professor Sophie Harman, Professor of International Politics at Queen Mary University of London said: "Questions of race, ethnicity, and health have long been too easily dismissed as a problem of class or socio-economic status, how can the UK have a problem of racial inequality in a socialised health system? Covid-19 is a bleak wake-up to those who need to see racial inequality in UK healthcare."

Mary-Ann Stephenson, Director of the Women’s Budget Group said: "The report from Public Health England showed that BAME communities are disproportionately likely to become seriously ill and die from Covid-19. What we now see is that the social, financial and psychological impacts of the pandemic are worse for BAME people too. It is particularly concerning that BAME women are reporting limited access to support from the Government.

"It is crucial that the Government carries out and publishes meaningful equality impact assessments on the impact of both the virus itself and their policies in response to it."

Sam Smethers, Chief Executive of the Fawcett Society added: "Disabled and older BAME women are experiencing a crisis of support as they are also hit harder by the effects of the pandemic. It is no surprise that BAME women also report the lowest levels of life satisfaction and happiness too.

"As the Government relaxes the lockdown it must consider the impacts on different ethnic groups and also adopt a gendered approach. The unequal impact of this crisis is driven by existing structural inequalities and discrimination in our society. Addressing that must be the focus of any plan going forward."

This research was drawn from data collected by Survation on behalf of the Fawcett Society via an online panel, with fieldwork conducted 15 – 21 April 2020. Invitations to complete surveys were sent out to members of online panels. Differential response rates from different demographic groups were taken into account.

The survey comprised an overall nationally representative sample and filtered booster samples drawn from online panels used to ensure sample sizes for populations of interest were robust. These populations included parents with at least one child aged 11 or under, people with low income (below the median), and BAME respondents. With these booster samples included, the total sample comprised 3,280 respondents. This included 448 BAME women and 401 BAME men, and 1,308 white women. The authors of this report then weighted the data to the current Labour Force Survey on age, gender, region, and education for each population, and conducted analysis.

The report comes a month after the publication of an analysis supported by Queen Mary, which revealed the stark impact of the coronavirus pandemic on parents and key workers.