How do Brits react to an epidemic: what can polling from the past tell us?

Coronavirus is the most significant pandemic for fifty years since the 1968 flu pandemic– estimated to have killed at least a million people worldwide, though with a lower case-fatality rate than COVID-19. Much has changed in our social and economic lives since then, not least scientific capabilities in monitoring and tracing infectious disease. There is still value in understanding how previous generations experienced similar outbreaks and their impact on society.

The 1968-70 epidemic had a serious impact in Britain, as Miller, Pereira & Clarke (1971) have illustrated. Arriving in August 1968, the main outbreak began in December and would last until mid-1969. Its peak in February/March saw 350,000 sickness benefit claims and consultation rates for flu and flu-like illnesses at 420 per 100,000 persons. The second wave which began late 1969 – and concentrating in a 6-week peak starting mid-December – was much more severe. The number of sickness benefit claims peaked at 750,000, flu-related consultations at 1,260 per 100,000 and the death rate attributed to flu, bronchitis and pneumonia at 10,500 in one week right at the beginning of January. The number of excess deaths attributed to the flu during the entire 1969/1970 wave was also 10 times that of the 1968/1969 wave.

Insights can be gained into this earlier outbreak using surveys from the period. While records of surveys from this period are typically elusive, our project Social and Political Change in Britain (1945-1991) – funded by the UK’s Economic and Social Research Council, carried out jointly by the University of Southampton and the Roper Center for Public Opinion Research at Cornell University – gives us access to relevant data for the first time. Our project will make available British public opinion surveys carried out by Gallup between the 1950s and the 1990s that previously were thought to have been lost.

Restoring historical survey data and making it usable is not without its challenges. Firstly, the data are stored in an antiquated “column binary format”, rendering it undecipherable by most modern software (and making it almost impossible to use, for all but a few researchers). Each survey has to be rebuilt from the collection of punch cards originally used to record the answers. This involves digitising old paper files, which have sometimes been incorrectly archived or are incomplete, leading to puzzles over how certain questions should be coded. For example, patterns in the data might not match the accompanying documentation for certain demographics, forcing us to rely on other measures and known relations in the data for cross-validation. Survey conversion means carrying out detective work to piece together the bits of the puzzle. The prize after this time-consuming task is historical data on British public attitudes that helps us better understand the past.

One such survey fielded by Gallup in February 1970 offers insights into experiences of the 1969-70 wave of Hong Kong flu outbreak. Respondents were asked about whether they had suffered from a cough – both flu-specific and other coughs – over the previous 3 to 4 months, thus covering the period of the pandemic. Due to a data preservation issue decades ago, a rare occurrence within the collection, female respondents have unfortunately been lost from the records of this survey. Nonetheless, we can still gain insights from the remainder of the sample, which consists of 600 British males.

Firstly, almost 29% of respondents reported having a flu cough during this period, just a little less (27%) reported having had another type of cough and, out of these, 3% reported having suffered both. Thus, during the course of the outbreak, our survey data reveals that over half of respondents experienced coughing symptoms of some kind. Further, although the flu cough appears rather less common for the youngest (16-24) age group, the mostly similar patterns across age groups stand out. Although we are not able to gauge severity of the cough from our survey data, the consistent patterns by age group suggest a potential contrast with reports related to COVID-19. 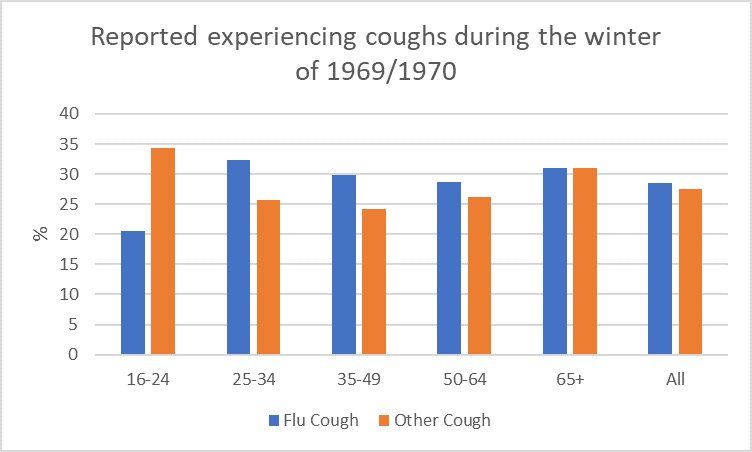 The Gallup survey also asked about what remedies those people who suffered from a cough sought. For ‘flu cough’, over half saw a doctor with around one third taking bed rest and less than one in ten doing nothing at all. This high rate of consultation with medical professionals offers a striking contrast with the COVID-19 outbreak, where those experiencing symptoms are advised to remain at home unless they worsen. The data thus offer insight into differences in both policy responses and the relative infectiousness of the coronavirus.

Breaking this down by age for those with flu coughs, older people were more likely to have taken bed rest. Those aged 35 to 49 reported seeing a doctor in slightly higher numbers, while the over 50s were most likely to take remedies already in the home. Perhaps unsurprisingly, given they would generally have had stronger immune systems, those aged 16 to 34 were the age group most likely to have done nothing. 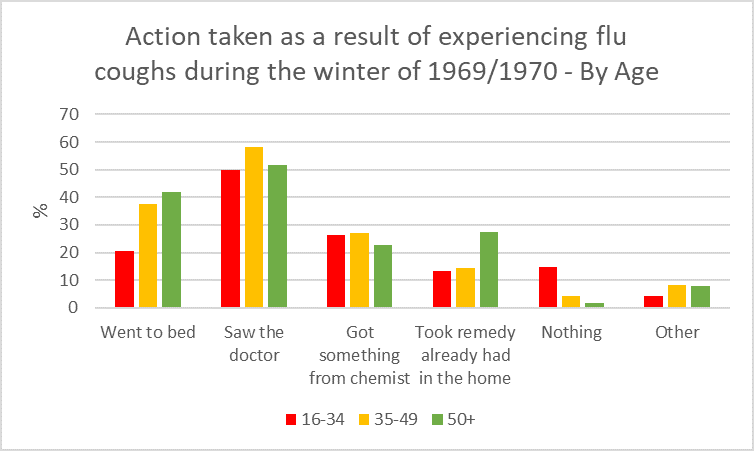 Finally, exactly what remedies did people take during the outbreak? The remedy most commonly reported for flu coughs was antiseptics or antibiotics from the chemist or prescribed by a doctor. Such treatments were used far less for other coughs. This suggests that during the epidemic, people largely relied on treatments from medical professionals if they were suffering from more serious flu symptoms, but were more likely to draw on other treatments for seemingly milder non-flu coughs. This data gives no indication of the sort of overload on health systems that COVID-19 is currently resulting in.

Bringing historical survey data to light in this way allows us to revisit past episodes in British history – at the same time as offering insights to contemporary issues and events. For the second wave of the 1968 flu pandemic, it highlights the large number of people who reported suffering flu-like symptoms during this period – and hints at the demographics of the illness (though with substantial uncertainty attached). Our project is creating a new data resource on historical British public opinion, consisting of individual-level survey responses across a wide range of social, political and economic issues. Some of the data relates to short-lived events like the 1968-70 flu outbreak, while some survey questions that were fielded by Gallup at regular intervals over half a century allow us to better understand long-term trends for things like party support, economic perceptions, and attitudes on a range of policy issues.

Note: the survey by Social Surveys (Gallup Poll) Ltd took place sometime in February 1970. Its Gallup record number is GBSSLT70-CQ681 and it is held by the Roper Opinion Center for Public Opinion Research: https://ropercenter.cornell.edu/ipoll/study/31072348.