Can Trump pull off an Electoral College majority once more, even when he is trailing Biden substantially in the popular vote? 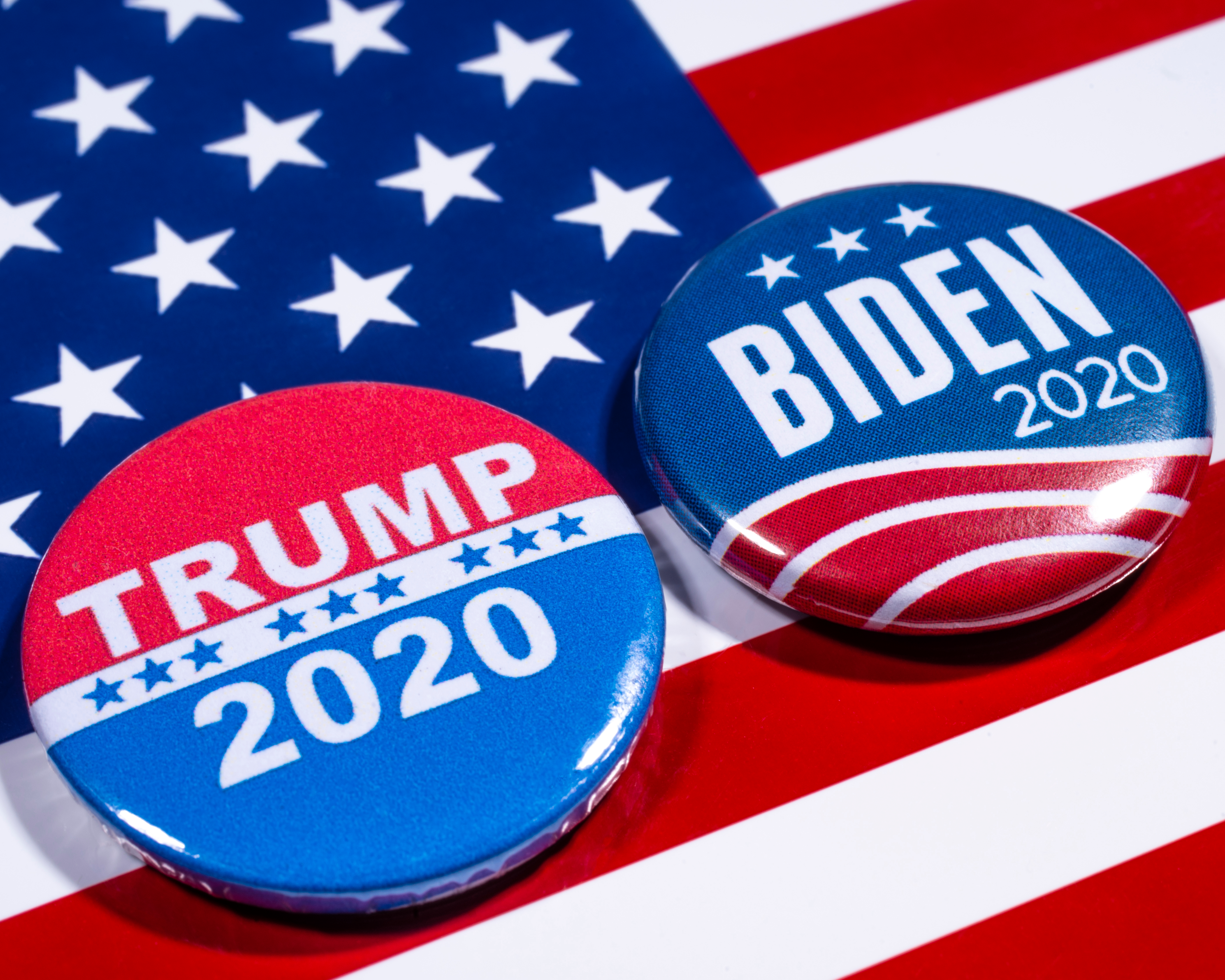 Image of Trump and Biden pin badges for the 2020 US Presidential Election.

In 2016, Donald Trump became the second US president in as many decades to win an election without winning the most votes. Donald Trump won a majority of states and their corresponding Electoral College votes (EVs), but Hillary Clinton won 2,868,686 more votes nationally. In 2020, Joe Biden looks assured to win the popular vote, the seventh time a Democrat has done so in the last eight elections. Yet, the key question remains: can Trump pull off an Electoral College majority once more, even when he is trailing Biden substantially in the popular vote?

A good starting point is to ask, ‘Was the disproportionality in Clinton’s electoral college loss in 2016 as bad as it could get?’. The answer, in short, is no. First, Clinton’s popular vote advantage over Donald Trump was wholly a product of the size of her majority in California. California is an absolutely enormous state. There are nearly 40 million Californians, about 12% of the whole US population. One in ten votes cast in the 2016 US presidential election were in California (14.2 million out of 136.7 million). A candidate who wins California is already 20% of the way to an Electoral College majority from that state alone.

In 2016, Hillary Clinton won California with 61.7% of the vote, giving her a majority over Donald Trump of 4,269,978. In effect, 4,269,977 of these votes were wasted. Clinton only needed a majority of 1 vote, not 4.3 million, in order to win the state’s 55 electoral votes. This fact is important because as California trends increasingly Democratic, it promises to skew the national popular vote totals more. Nearly a million people in California (943,998) voted for a 3rd party candidate in 2016. For the sake of argument, let’s say those voters went for Joe Biden this time around. Holding all else equal, Biden would win California with a majority of 5.2 million. Because California is so big, even this modest shift in one state would have a notable effect on the popular vote, increasing the national popular votes to the Democrats by nearly a full percentage point (0.7 points).

Second, Trump’s victory in 2016 was not maximally efficient. In one sense, Trump won very efficiently. He secured very narrow majorities (a total of 77,744 votes) in three key swing states (namely Pennsylvania, Michigan, and Wisconsin) which gave him 46 Electoral College votes, depriving Clinton of an Electoral College majority. Nonetheless, Trump could have won the same number of states with millions of fewer popular votes than he actually received. Maximum efficiency under the Electoral College means winning a state by a margin of 1 vote. For example, Trump won Texas with a majority of 807,179 votes, but in effect, he could have done without 807,178 of these votes. A majority of just one vote would still deliver 100% of Texas’s 38 electoral votes to Donald Trump.

Across the 30 ‘red’ (Republican) states which backed him in 2016, Trump accumulated 8,357,640 surplus votes. If all of these Trump voters had stayed at home on Election Day, Trump would have still defeated Hillary Clinton. The underlying Electoral College map would have been exactly the same, but the popular vote totals would look very different. In this scenario, Trump would have been elected president with just 42.6% of the popular vote compared to Hillary Clinton’s 51.3%, a gap of 8.7 per cent. Hillary Clinton’s victories in the blue states were also inefficient, even more so than Donald Trump’s red-state victories. Clinton won a surplus 11,226,316 votes across the 20 ‘blue’ (Democratic) states. These surplus votes help to explain her popular vote plurality. Indeed, if Clinton had shed these 11.2 million surplus votes, she would have won the same number of states, but lost to Trump in the popular vote quite heavily: 43.5% to Trump’s 50.2%.

In the final weeks of the 2020 election, Joe Biden has enjoyed a steady advantage in national polls, which attempt to measure the popular vote. Just 9 days before the election, Biden’s average polling lead is 8.0 points above Trump. Could Trump defeat Biden in spite of trailing him so much? In a word, yes. There are three factors that could result in a Trump Electoral College victory on such a poor popular vote showing.

First, Trump performs less well in the red states than he did in 2016, thereby making his red state victories less ‘inefficient’. There’s some evidence to suggest that this is happening. Texas this time is a swing state, whereas in 2016 it was assumed to be safe for Trump. As of the time of writing, Trump has a 2.6 average poll lead in Texas, whereas in 2016 he won the state by 9 points. Let’s imagine Trump only wins Texas by 1 point (a majority of about 80,000 votes on 2016 numbers). This is a much more ‘efficient’ win for Trump, but it could depress his national popular vote totals by about three-quarters of a million votes.

This pattern could be replicated across the states Trump won in 2016. Trump won Ohio with a 446,841-vote surplus. If he wins the state again, it’s not likely to be by as many wasted votes. Trump won Georgia by 204,555 in 2016. If he wins it in 2020, it’s likely to be a majority in the tens of thousands, perhaps even fewer. 600,000 Trump voters in Tennessee could have never shown up in 2016, and no one would have noticed, except to the extent that Trump would have dropped half a percentage point in the national popular vote.

The second factor is that Trump needs to do especially well in a handful of key marginal states which tend to decide elections. In 2016, there were seven states decided by 50,000 votes or fewer: Pennsylvania, Wisconsin, Michigan, New Hampshire, Maine, Nevada, and Minnesota (70 electoral votes). Trump won three of these states*, receiving 47 Electoral College votes. In reality, Trump only needed to win one of these seven (Pennsylvania) to secure an Electoral College majority. In 2020, Trump could afford to lose Michigan, Wisconsin, and one other small state (e.g., Iowa) from his 2016 coalition, as long as he holds Pennsylvania. Nine days before the election, Biden enjoys a 5 point lead in Pennsylvania. If Trump were to lose all seven of the most marginal states from 2016, it’s game over. If he wins Pennsylvania, he’s odds on favourite to win.

The third factor is Biden outperforming Hillary Clinton in the blue states. This is quite plausible. A large number of blue-state voters in 2016 seemingly voted for a third-party candidate, such as the Green Party’s Jill Stein as a ‘protest’ vote against the unpopular Clinton, knowing that their vote would not make a difference in the electoral college. Biden, who has higher favourables than Clinton, could gain about half a million ex-Green voters in California, Illinois, and New York alone. In addition, animus against Trump appears to be driving high turnout in Democratic areas. It’s not infeasible that Biden could win some blue states by even bigger margins than Hillary Clinton in 2016. This would demonstrably drive up Biden’s popular vote victory without touching the Electoral College map.

With all this being said, an 8-point popular vote lead for Biden would mean, in all probability, a Biden victory. There is a fine line between maximum efficiency and catastrophe: a careless loss in Texas or Florida could end Trump’s electoral chances. If Biden’s poll lead in Pennsylvania holds, Trump is in trouble. While a Trump victory is by no means infeasible, the balance of probability continues to favour Biden in the final stretch of the campaign.

Dr Richard Johnson is a Lecturer in US Politics in the School of Politics and International Relations at Queen Mary University of London.