Gabriel Lawson writes about prisoners-of-war dealing with isolation and its absence. 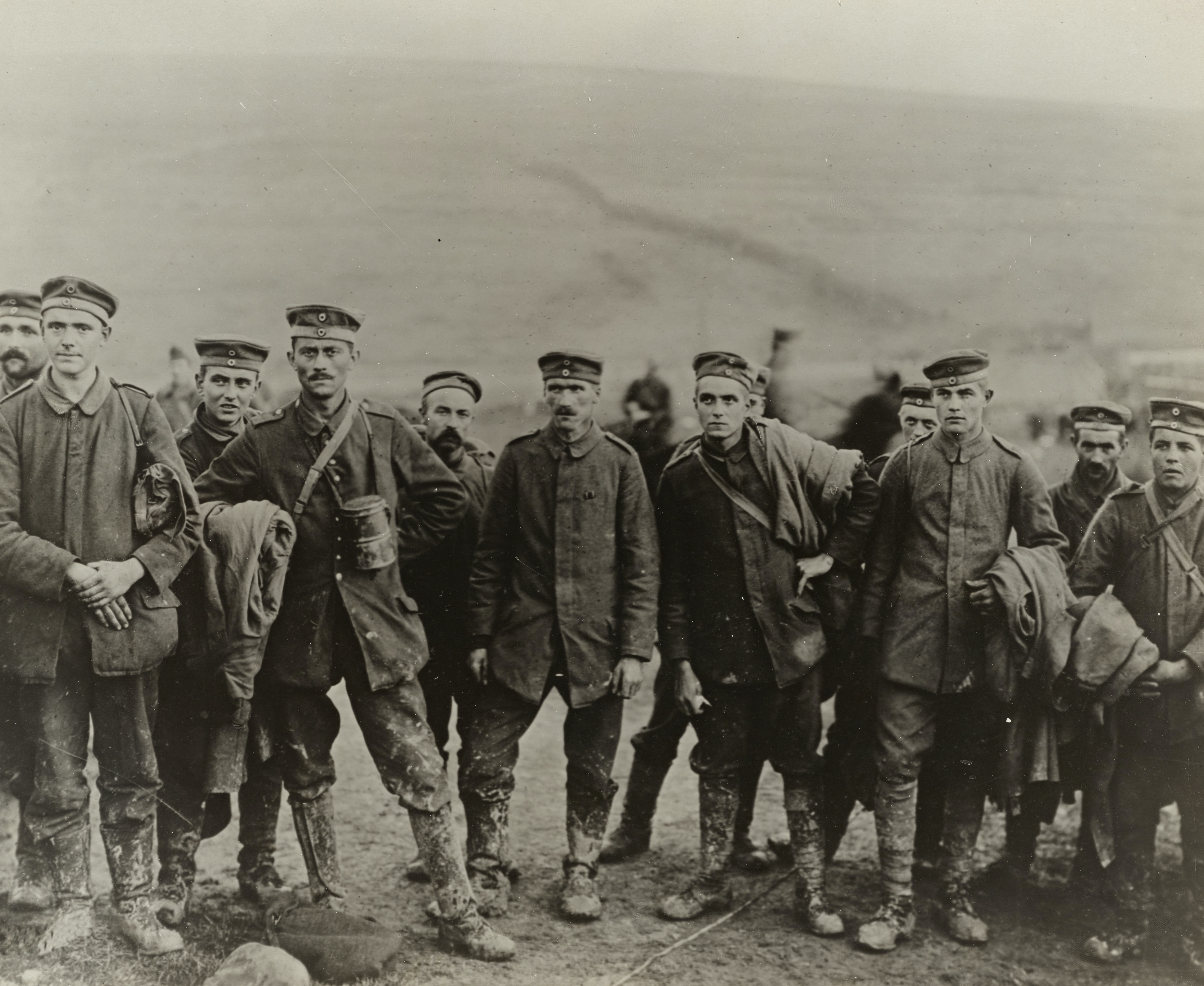 Photograph of German prisoners in 1917

Photo by The New York Public Library on Unsplash

The last few weeks have seen an unprecedented transformation in the way we live. The U.K. and much of the wider world is under various forms of ‘lockdown’ restricting the movement of individuals and prohibiting non-essential social contact. While comparisons to the Second World War have been rather too prevalent since the pandemic began, debates focusing on the supposed ‘Blitz spirit’ have ignored another, more fitting example.

Prisoners of war experienced social isolation and displacement for lengthy periods of time, and left a variety of sources describing the psychological impact of distance and dislocation. Kept at a distance from the immediate fighting and the possibility of death in battle, British P.O.W.s nevertheless found themselves separated from their homes, families and normal lives for an indefinite period of time. Boredom, loneliness and isolation were widely felt as prisoners attempted to fill their time and keep in touch with those distant from themselves. As time wore on P.O.W.s began to describe themselves as ‘Stalag happy’, a term used to express feelings of irritability, fatigue and depression related to lengthy imprisonment.

Neurotic symptoms had been observed in prisoners during the First World War, and by 1939 it was accepted that the abnormal conditions of captivity could lead to psychological distress. Adolph Vischer, Swiss surgeon and expert on prisoner neurosis, claimed that while solitary confinement was known to have an adverse mental impact on civilian prisoners, the ‘confinement in mass’ practiced in P.O.W. and internment camps could be just as damaging.

‘Loneliness in the midst of company’ was destabilising, as prisoners chafed at the lack of privacy while simultaneously longing for more familiar companions.

Too long in captivity and it was feared that these feelings of distress would result in permanent personality changes. According to army psychiatrists, prisoners kept captive for lengthy periods were at risk of ‘great changes which prove very much more difficult to reverse’, including but not limited to ‘deep and serious bitterness’ and ‘marked social anxiety or loss of confidence in social relations and situations’. ‘Barbed wire disease’ resulting from prolonged imprisonment and absence from home could produce a myriad of symptoms, but central to this emergent illness was a sense of social anxiety and difficulty engaging with others. Many P.O.W.s described experiencing strange dreams, a phenomenon recently reported in the media among those locked down due to coronavirus [1].

At a primal level, the isolation and emotional deprivation of a prison camp robbed individuals of their ability to act as social beings. Psychiatrist Henry Rollin claimed in 1948 that symptoms in prisoners were produced by their inability to satisfy ‘emotionally saturated urges’. Captives were deprived of relationships which could have provided them with ‘compassion, tenderness, understanding and comfort’, and their natural aggression was turned inwards resulting in ‘inertia, apathy or depression’. The natural urge ‘to make something of life’ was frustrated inside ‘the sterile vacuum of prison’.

The misery could ultimately lead to a total breakdown in morale. Tom Main, psychiatrist and pioneer of group therapies for mental illness, compared captivity to the evacuation of children and wrote that the removal of individuals from their existing community ‘produced among some of the people so displaced a loneliness and confused distress and a dissatisfaction with their new strange society that expressed itself in poor standards of conduct’. Feeling this dislocation, prisoners attempted to keep their connection with families and friends alive by writing home as frequently as possible. Respondents were allowed to send ‘snapshots or unmounted photographs of a personal nature’, and POWs frequently reported that they talked to or kissed these photographs as physical traces of home.

Beyond letters and photographs, prisoners attempted to include themselves in the communities they had left in any way possible. Sundays were known among prisoners as a time for ‘re-living’ their lives at home and daydreaming of spending the day with their family acting out the usual routine. Some prisoners even attempted to synchronise activities with those still at home, for example going to bed at the same time or writing to each other on the same day [2].

On the home front, P.O.W.s’ families were reassured that they were capable of mentally adapting to their new surroundings and enjoying themselves within the camps. The Prisoner of War magazine issued to prisoners’ relatives informed readers in May 1942 that:

Probably all the time their lot is nothing like as bad as you think. They have accepted the routine of their new existence and get as big a kick out of the latest Red Cross food parcel or the new books in the library, or the latest letter from home, as ever you got out of a new frock or the latest Leslie Howard film.

At the same time, relatives were frequently reminded of the importance of letters to the prisoners’ morale and their responsibility to keep in touch.

While those behind barbed wire hoped that liberation would bring an end to their feelings of isolation and ennui, many were sorely disappointed. British prisoners of war spent up to five years longing for their release and repatriation, but many experienced distress on their return. Official reports noted that repatriated prisoners were ‘disillusioned by the contrast between real life at home and the romanticised versions of it which were common in the enforced day-dreaming of stalag life’.

Psychiatrists described this period of depression as ‘the normal reactions of the individual to disillusionment, following a form of social isolation and absence from home’. Having spent significant amounts of time dreaming of familiar company and home fires, repatriated prisoners found themselves craving isolation and solitude. Many reported an inability to tolerate the company of friends and neighbours, even for a few minutes.

In the current pandemic, psychologists have warned that with the end of ‘lockdown’ people may find a return to sociability more difficult than expected. Countries ahead of the U.K. in their release from restrictions have reported a rise in demand for mental health services, as immediate elation is followed by disillusionment and depression [3]. Those expecting to exit their homes to find their relationships and ordinary lives unaltered may be in for a rude awakening.

Repatriated prisoners described a process of adjustment as their horizons expanded beyond the limited world of the camp. G.C. Pether, writing in the Lancet in 1945 to describe his feelings upon being liberated in 1918, said that after years locked away

the sensation of moving as free men was strange and alarming… For so long had the barbed wire confined them that many felt uncertain of themselves if they went more than a short distance from home.

At the same time many repatriates were dealing with a sense of loss, as the world they re-entered was very different to that they remembered. Prisoners interviewed after their return noted that ‘England in wartime was very different from the pre-war England of their nostalgic dreams’. While we may see a further lifting of restrictions in the coming weeks, it will be important to take the post-lockdown world for what it is rather than looking back to a supposedly better time before.

[2] Claire Makepeace, ‘Living Beyond the Barbed Wire: The Familial Ties of British Prisoners of War Held in Europe during the Second World War’, Historical Research, vol. 86/no. 231 (2013)

Gabriel Lawson (@GabeLawson95) is a PhD student in the Department of History at Queen Mary University of London. His research focuses on mental health, British prisoners of war and resettlement in the aftermath of the Second World War.