When this is all over, we’re going to build a new Jerusalem, apparently. We’ll build back better (according to the Prime Minister), in a spirit of togetherness we’ve not seen since 1945 (according to the Leader of the Opposition). 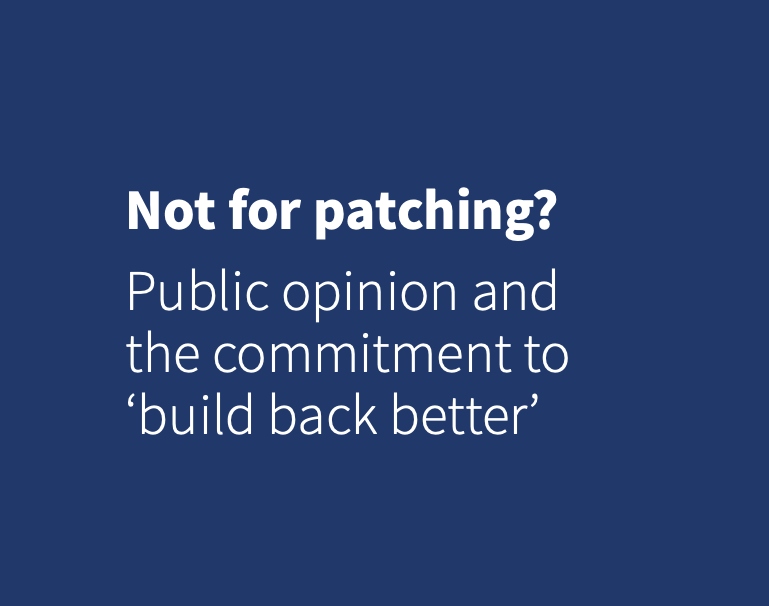 Image of the report, Not for Patching? Published by the Mile End Institute.

Maybe. Maybe the experience of the pandemic – and the light it has shone on British society – will make people want to see radical change and a transformation of British politics and society. Maybe future historians will look back on this moment in the same way we see the Beveridge report and the creation of the NHS.

Or perhaps the experience of the last year and a half has been quite enough of a change for people already – and what they will really want is to go back to how things were before. Maybe a regular haircut, a trip to the pub, and the chance to see friends and family will turn out to be top of their wish list.

As part of the Mile End Institute project entitled Not for Patching? – the title comes from the Beveridge report, although in a spirit of cautious enquiry we’ve added the question mark – we wanted to find out exactly what people did want, once the pandemic was in the rear-view mirror. We commissioned a large survey from Ipsos MORI, asking about people’s post-pandemic priorities as well as how well they thought the government had dealt with the challenges of the crisis.

One of those questions was (deliberately) very simple, but we felt it was worth asking, rather than assuming: “On balance, would you prefer it if life goes back to how it was before the crisis once the pandemic is over, or do you want things to be different?”

This reveals a much more nuanced public than a lot of the discussion so far.

An eight-percentage point lead for change over the status quo ante does not, on the face of it, sound like a great foundation for a radical transformation of society.

You might well object that the question offers a false binary choice. Even getting back to ‘normal’ would understandably feel like a fantastic achievement and a great relief to many, which may not rule out them also wanting to see changes. We did allow people to choose ‘neither’ (chosen by 8%) and ‘both’ (10%). This last group – who want both change and a return to the status quo – are not be as contradictory as they first sound. You can want a large part of your lives to return to normal, whilst still believing that significant aspects of society and life should change. And certainly, when we asked other questions, it’s possible to see a desire for change, even amongst those who say they would like things to go back to normal.

Equally, however, there can be multiple motives for not wanting to go back to the status quo. We asked those who said they wanted to see change to explain their answers in their own words – and the answers are revealing.

It is true that there were plenty of people who clearly saw this issue in explicitly political (and sometimes partisan) terms, such as the following (and here, and below, we report comments exactly as they were typed, typos and all…):

“Hopefully we have learnt more about the gap between rich and poor, really how many people are homeless and the disparity between poor and well off in terms medical outcomes. If we understand these we could make changes”.

“12 years of vicious cuts. Scapegoating minority groups for their own failings”.

“The UK has become an intolerant inward looking country that attacks the poorest in society. It is becoming a failed state, with a government no longer held to account by parliament and is riding rough shod over international law.  Our political classes are driven by self interest and not a duty to the country”.

This sort of comment was a minority, though. Around 12% of those who said they wanted to see change gave this sort of explicitly political response.

More often, a desire for change came through in a vaguer, more holistic, way, but still expressing a wish for things to be different: “Too materialistic before”; “More equal”; “Appreciating the things in life that matter”; “I want a fairer society”; “Because before people were too pre occupied with money, at least with the pandemic SOME have learnt the real meaning of life and it's not money”, and so on. This sort of sentiment was evident in about 38% of responses from those who wanted to see change. It often came with an environmental tone (“We need to be greener and have more respect for nature”, “It’s a chance for a greener way of life”, “We need to build a more environmentally friendly way of living” and so on).

But there were also lots of answers which were about change, but of a different sort. For example, for some respondents (around 15%), their desire for change was about health issues, such as:

“Even when things get back to whatever normal is I will be more reluctant to mix outside family groups and to use public or other forms of mass transport”.

“Because it has made society aware of how easily it is to spread germs, it has made everyone more aware of their intended impact on others. I.e people are disgusting”.

“I think that social distancing and having hand sanitiser available and other precautions should stay in place for a while until the pandemic is truly over and there is no chance of another wave”.

“I think the hygiene side of things should remain.  The distance and smaller groups I have enjoyed. Being served at your table for drinks (especially the pub) and food rather than self service”.

Plenty of others (around 19%) had taken positives from the imposed change of lifestyle over the last year, such as the chances to work from home or to see more of their family, and did not want to revert.

“A lot has been learned about how effectively people can work from home, given the right support, and how work can be divided more equitably between a greater number of employees”.

“A lot more family time has been achieved”.

“Previously I spent over 12 hours a week commuting at a cost of over £600 per month. Wfh means I have more time to see my partner, to exercise and do things around the home. I would like to see a hybrid way of working that is more flexible and allows greater wfh than pre covid”.

“Some of this year’s changes have been positive.  Option to work from home, less commute/pollution, more time with family etc”.

“Working differently has helped the environment and should continue. Working from home has also created better work-life balance for a lot of families”.

And others (around 7%) said they had no great desire to go back to meeting lots of people or quite enjoyed the more sedate pace of life:

“I have enjoyed not having social commitments”.

“Because life seems to be a slower pace which I like”.

“I don't want to go back to the rat race of fitting in endless social things that I neither care about or want to do”.

“I have never liked all this, kissy, cuddly, thing from friends and relatives. Its a blessing not having to do it, without upsetting anyone. I have been self isolating since March 2020, and am quite enjoying the peace and solitude”.

In addition, around one in five (17%) gave a variety of other types of responses to this question, often along the lines of noting that things had just changed (“as covid has changed things forever”; “It is so much better now and nobody will want to go back to before”) or which were more idiosyncratic (“because there have been some positive improvements as a result like better click and collect services”).

The above figures sum to slightly more than 100%, as we coded some statements as containing more than one type of view, and it is worth remembering that these are the percentages of those who say they want to see change, not the full sample. In other words, roughly half of those who said they wanted to see change expressed that desire in what we might call political terms if we define that fairly broadly to include the first two categories above. That is, around half of the 43%– or about one in five of the population.

Of course, just because someone writes down one response (“I like working from home”) does not necessarily mean they don’t also agree with another (“we should hugely increase investment in the NHS”) or vice versa, and it is clear from other parts of the survey that there is a desire for some things to be different in the UK once the pandemic has been dealt with. But equally, we do need to at least be a little careful about making assumptions about what people want in the future. For some ‘building back better’ may well mean radical change – transforming political structures and the way the British state functions. But for plenty of others the new Jerusalem looks pretty much like the old one, but with more hand sanitiser, working from home, and fewer social occasions.

Philip Cowley is a Professor of Politics at Queen Mary University of London.