As progressives in the United States are fond of saying, “The New Deal was a great idea. It is time we tried it”. For its modern critics, the New Deal, as implemented, was not ambitious and transformative enough. A true New Deal would have conceded a lot less to capitalist interests, better protected the environment, and more aggressively addressed racial and gender disparities (rather than exacerbating them). 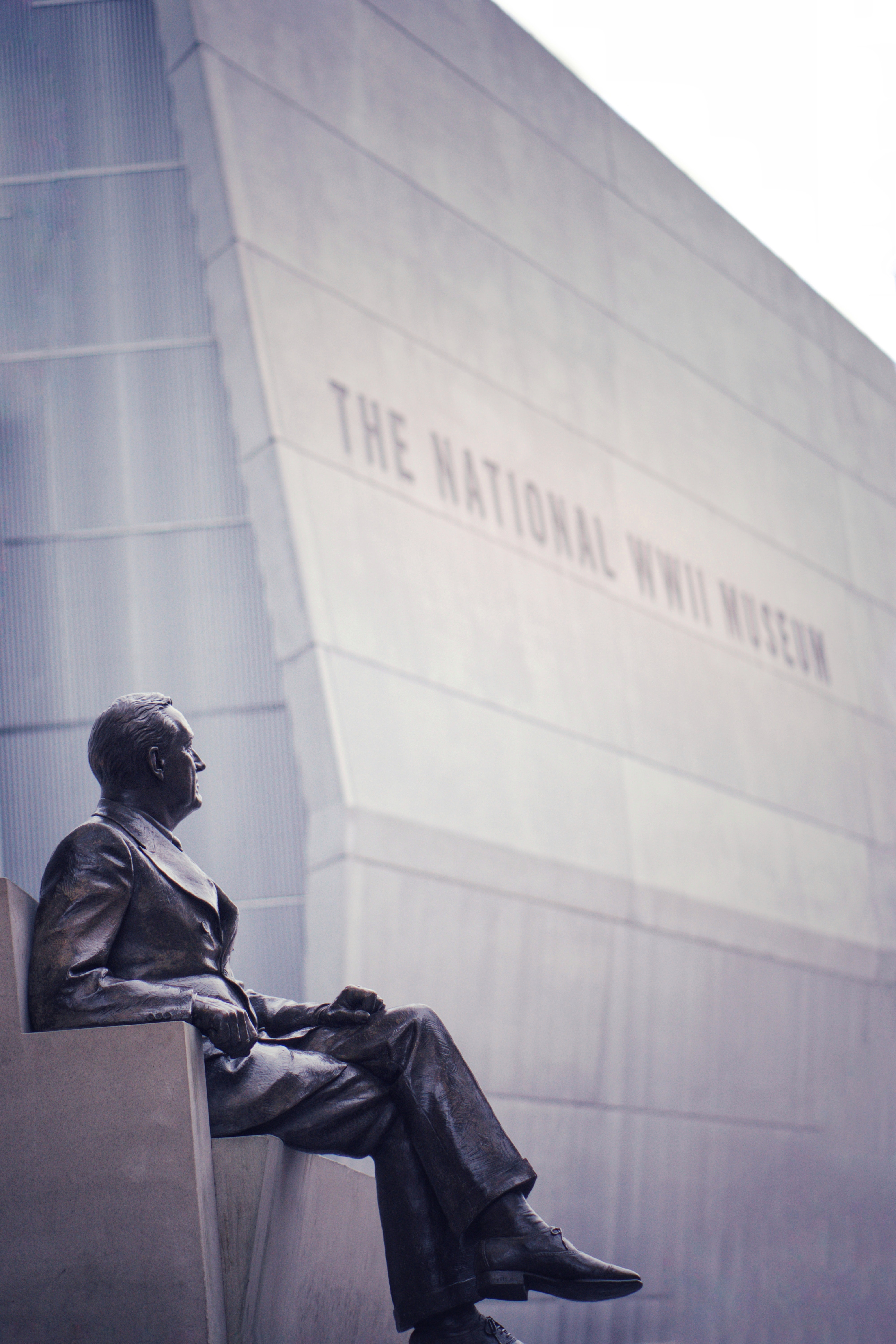 Photograph of the FDR statue at the National WWII Museum, USA.

Photo by Jeremy Lishner on Unsplash

The New Deal marked an immense nation building campaign. The famous alphabet soup of government agencies cited by Gove – the Public Works Administration (PWA), the Civilian Conservation Corps (CCC) and the Agricultural Adjustment Administration (AAA) – not only put people back to work, but laid the foundation for American economic prosperity for several decades. In the spirit of ‘levelling up the country’, the New Deal poured resources into poorer and underdeveloped areas in the Western and Southern United States, bringing modern infrastructure – dams, waterworks, electricity, roads, and public buildings – to places on the periphery that the market had left behind.

What Gove and Johnson neglected to mention – as did many of their Labour critics – is that the New Deal was not only a technocratic attempt to engineer economic recovery and generate growth. It was also a massive project of wealth redistribution, driven from below by the mobilisation of working people. The New Deal may have “saved capitalism” and restored “faith in democracy,” but it did so by changing the social balance of power, raising wages, and dismantling entrenched patterns of wealth and income inequality.

We should not be too quick to dismiss Conservative calls for government action, however insufficient in magnitude, especially as the world economy enters a downturn of epochal proportions. Faced with the onset of the Great Depression in 1929, President Herbert Hoover’s Republican White House took a very different course: his Administration hung on (disastrously) to economic orthodoxy, balanced the budget, issued optimistic statements, and hoped for business confidence to revive.

Recovery never came, and millions of Americans suffered through several long years of utter destitution. About a quarter of the workforce – over 11 million Americans – was unemployed, facing evictions and standing in long breadlines. Shanty towns, known as Hoovervilles, appeared in open spaces in major American cities, providing makeshift shelter for the homeless. It would not be a bad thing if the Johnson government did not go down the same path.

Nor should we write off these bold pronouncements as mere publicity stunts. Something is definitely afoot among conservatives on both sides of the Atlantic, which is worthy of attention. In recent years, American conservative commentators and policy advisors such as Julius Krein, Saagar Enjeti, and Oren Cass have become increasingly vocal in their criticism of the corporate wing of the Republican Party. Announcing their commitments to American industrial capacity and good jobs, they have questioned the tenets of neoliberal globalisation, instead advocating government investment in research and infrastructure. Important differences aside, their agenda overlaps in important ways with proposals from progressives such as Mariana Mazzucato, Ha-Joon Chang, and Dani Rodrik, who have similarly called for government to nurture technological innovation and economic restructuring. As I have argued elsewhere, state-led development in this vein has been the rule rather than the exception in American history (and beyond).

This type of economic transformation – referred to on the left today as a ‘Green New Deal’ – would be a welcome development. But it would be incomplete, and in fact impossible, without a radically new distribution of social resources. If the original New Deal is the benchmark, despite its many limitations, this process would need to be of immense proportions. As Thomas Piketty recently demonstrated, on the eve of the Great Depression in 1929, the US had reached almost unfathomable levels of inequality. The top ten percent in the US owned nearly 85 percent of total private property. The top one percent alone owned roughly 45 percent.

The New Deal began a process that greatly eroded the share of property held by this affluent segment of the population, driving it down to almost 60 and 20 percent, respectively. The share of the total income of the affluent similarly declined (before rising again from the 1980s). Much of this shift was accomplished via progressive taxation, most importantly a high top marginal income tax rate that averaged 81 percent, coupled with high tax rates on large inheritances. Progressive taxes ran alongside measures to enhance the relative income share of workers: the right to collective bargaining, a high minimum wage, job security and benefits, and unemployment and disability provisions. Although significantly weaker than their European counterparts, these measures sharply reduced (but of course did not eradicate) economic inequality in American society.

FDR and his circle of advisers did not enter office with clear plans to orchestrate this large-scale redistributive shift. They were pushed to do so by millions of workers, who took to the streets in rallies, joined unions (doubling union membership within a single decade), and launched strikes (2,000 in 1934 alone) in industrial cities like Chicago, Detroit, and Pittsburgh. These workers also began to vote in large numbers, demanding relief, higher wages, and other economic protections. They flocked to the well-paying jobs that the Federal government’s nation building efforts provided.

Driven from below by industrial workers, FDR was also prodded by radical challengers, most famously the Louisiana populist Huey Long, who reached millions with his call for a redistributive federal program that would “Share Our Wealth.” FDR responded to Long and other challengers by swinging to the left and stealing their thunder, which further antagonised many of the country’s business leaders. By the time he ran for re-election in 1936, he was expressing open hostility to the forces of “business and financial monopoly, speculation, reckless banking.” “They are unanimous in their hate for me,” he famously declared at Madison Square Garden in New York “—and I welcome their hatred.”

The New Deal showed that nation building and redistribution of wealth went hand in hand. Although good public service, bold leadership, and pragmatic policy experimentation mattered, they were no substitute for substantial reallocation of resources and highly mobilised constituencies. While the UK government’s rejection of austerity and commitment to combat the calamitous effects of Covid-19 are steps in the right direction, the deep-seated nature of the crisis means that more will be needed – a lot more – if ministers truly want to wear the mantle of FDR.

Dr Noam Maggor is a Lecturer in American History at Queen Mary University of London.