Mayor of London drops in popularity

Increasingly fewer Londoners believe that the Mayor of London, Labour’s Sadiq Khan, is doing a good job, according to the latest poll conducted for the Mile End Institute at Queen Mary University of London. 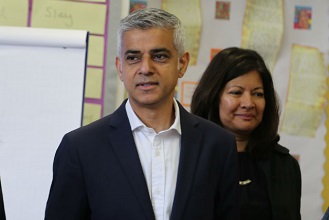 Under half (44 per cent) thought the Mayor was doing well compared to 52 per cent in April 2018. Almost as many, 40 per cent, think he is doing badly, a rise of 10 percentage points since April.

This results in a net score of +4, the lowest since Queen Mary’s Polling London project began.

Philip Cowley, Professor of Politics at Queen Mary and Director of the Mile End Institute, said: “In April 2018, Sadiq Khan was still ahead among those aged 50-64, working class Londoners, those living in outer London and white voters. He’s now behind among all of these groups”.

He added: “When we first started polling, he was one of the most popular politicians in Britain. Such was his cross-party support, he even had net positive support from Conservative voters. Those days are long gone”.

The poll also shows both main parties losing support. The Conservatives are at 26 per cent, which is the lowest share since London Polling started - seven points down on their performance in the 2017 election. Labour have also fallen seven points since 2017 but still have high levels of support, polling at 48 per cent.

Smaller parties have experienced an increase in support too. Support for the Liberal Democrats rose five percentage points from 10 per cent in April to 15 per cent in September. The Greens are now on five per cent, double their performance in the general election. UKIP have also doubled in support in the same time period from two per cent to four per cent.

However despite increased support for UKIP and Sadiq Khan’s unpopularity, Londoners reject the notion of Nigel Farage standing as a Mayoral candidate for UKIP in 2020, with 62 per cent saying they oppose him and 16 per cent for Don’t Know, compared to 22 per cent who would support his candidacy.

All figures, unless otherwise stated, are from YouGov Plc. Total sample size was 1,218 adults. Fieldwork was undertaken between 3 and 7 September 2018.