"I am most deeply hurt"

Using 'real time', Matthew Bailey and Nigel Fletcher explore what happened to the Labour party after the untimely death of Hugh Gaitskell. 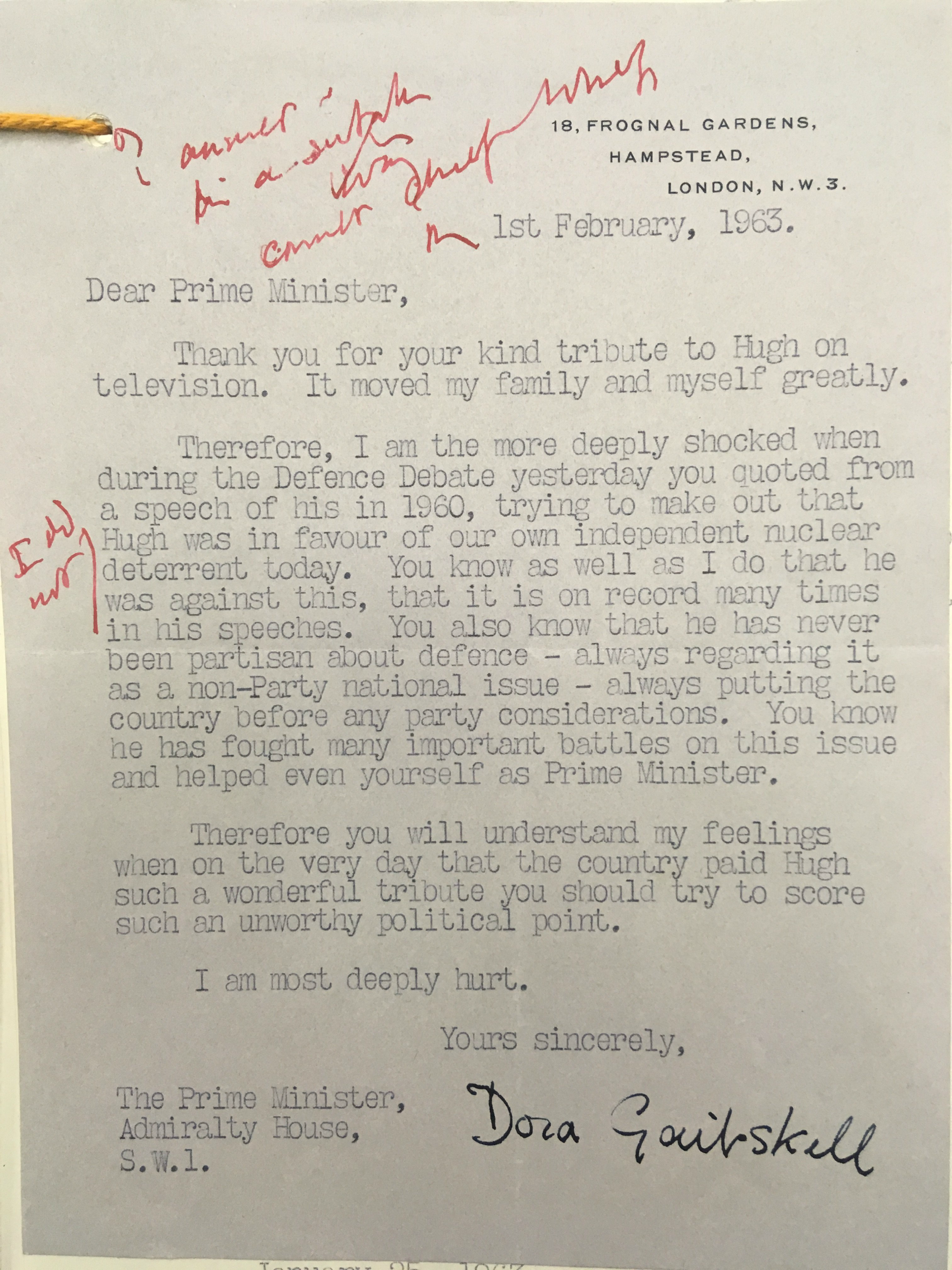 In January 1963, with Britain shivering through the coldest winter since 1895, the Labour Party found itself suddenly in need of a new leader. The vacancy arose due to the untimely death of the incumbent, Hugh Gaitskell.  Fifty-five years later the events that followed are being chronicled – ‘in real time’ - by the Mile End Institute’s Twitter account @haroldsrise.

Gaitskell’s sudden demise at the age of just 56 shocked his party, fellow politicians and the public. Tributes poured in, including from the Conservative Prime Minister, Harold Macmillan. Within half an hour of the news of Gaitskell’s death, a telegram had been sent from Downing Street conveying condolences to Gaitskell’s widow, Dora.

The following evening Macmillan took to the airwaves with a television tribute broadcast simultaneously on both channels. The Prime Minister noted that Gaitskell ‘had that indefinable thing – character…He was courageous, sympathetic, and understanding even of bores.’

Three days later, in a mark of respect usually reserved for former Prime Ministers, Parliament paid tribute to Gaitskell before adjourning their proceedings. In the Commons, Macmillan spoke of Gaitskell the skilled parliamentarian:

He had a rare power of lucid exposition even of the most complicated and difficult problems, and yet this did not detract from his capacity to develop a rhetorical and emotional appeal of a very high order.

The irony, as his official biographer, Alistair Horne, makes abundantly clear is that Macmillan ‘heartily despised’ his opponent. Macmillan’s diaries are littered with contemptuous jibes and catty remarks about him. Just months before Gaitskell’s death, he wrote in his in diary: ‘I’m afraid he is a poor creature, without any real breadth of view or sense of values.’

Macmillan’s questionable sincerity is not the end of the story, however. In the National Archives there is an intriguing letter - dated a fortnight after Gaitskell’s death - from his widow Dora, addressed to the Prime Minister. It is a letter we believe has not been made public before.

Mrs Gaitskell opens warmly, thanking the Prime Minister for his television tribute which she says ‘moved my family and myself greatly’. But her tone soon changes to one of outrage:

[I was] deeply shocked when during the Defence Debate yesterday you quoted from a speech of his in 1960, trying to make out that Hugh was in favour of our own independent nuclear deterrent today. You know as well as I do that he was against this, that it is on the record many times in his speeches.

The letter is annotated by Macmillan: a brief ‘I did not’ next to Dora’s accusation; and at the top a plaintive question mark, followed by ‘answer in a suitable way, Comment Chief Whip’.

The cause of Mrs Gaitskell’s anger was Macmillan’s closing speech in a debate in the Commons on nuclear weapons, in which he had quoted from a speech Gaitskell made in 1960. In this, the Labour leader had weighed up the arguments for and against Britain having an independent nuclear deterrent. Macmillan chose, however, only to quote Gaitskell’s argument for the strategy.

Labour members had been outraged at what they saw as Macmillan’s manipulation of Gaitskell’s words, and the fact the Prime Minister had done it just hours after the public memorial service at Westminster Abbey for the man he was quoting. Dora Gaitskell shared their attitude, concluding in her letter:

you will understand my feelings when on the very day that the country paid Hugh such a wonderful tribute you should try to score such an unworthy political point.

I am most deeply hurt.

Macmillan replied a few days later on 5th February, writing that he was sorry Dora had been ‘shocked’ by what he had said during the debate. After providing an explanation of the point he had been making he finishes ‘I should always be sorry to say anything to wound you, particularly on that day. Certainly nothing could have been further from my mind than the inference which you feel my remarks had.’

It is an artful response, expressing sorrow not for his choice of quotation, but for what he considers to be her misunderstanding of it. He perhaps believed she had been influenced by the reaction of Labour MPs in the House, which seems to have got under the Prime Minister’s skin. His diaries contain an entry, written the day before his reply to Dora, in which he refers to the outrage his remarks caused. He also seems to suggest the Labour Party was suffering an inauthentic emotional spasm in response to Gaitskell’s death:

The Opposition pretended to be angry because I quoted from a speech of Gaitskell’s in 1960. ‘On this day, of all days’ etc. Actually, I had been provoked into this quotation (wh. is the locus classicus of the defence of the British independent deterrent) by Gordon-Walker. It was rather a fake protest. Even a saint may be quoted. But the movement to ‘beatify’ (as a preliminary to sanctification) of Gaitskell is very strange. The Socialists are really doing themselves a great injury by this exaggerated attitude. No subsequent leader will have a chance….

Whether or not the Labour Party’s reaction was ‘exaggerated’, Macmillan must have known that citing Gaitskell as he did on the day of his memorial service was in poor taste. Dora Gaitskell was entitled to feel aggrieved, and probably deserved more than the half-apology she received. Meanwhile, the man who emerged from the ensuing leadership contest, Harold Wilson, would be given rather more than ‘a chance’ over the following years.