Helen McCarthy, author of ‘Women of the World, The Rise of the Female Diplomat’: Exclusive Interview

Women weren’t permitted to become UK diplomats until 1946, and until 1973 they had to quit if they got married. Liz Heron interviews Helen McCarthy, an expert on the struggle for gender equality in this most traditional and recalcitrant corner of government. 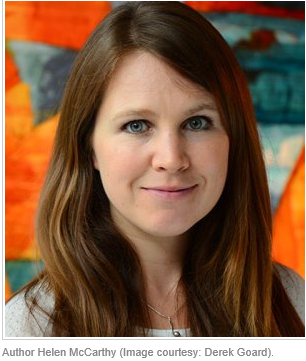 The number of women leaders in the UK’s diplomatic service has increased notably over recent years. Women made up 30% of senior managers in the Foreign and Commonwealth Office (FCO) in 2016: up from 23% in just three years. They now head nearly half of the 52 diplomatic missions in Europe, and 20% of the 270 missions worldwide.

In February, foreign secretary Boris Johnson signalled his commitment to the advancement of women ahead of International Women’s Day 2017 by announcing the appointment of a special envoy for gender equality – charged with championing women’s rights, both within the service and around the world. The FCO also hosted a joint blog by British female ambassadors to 13 European countries, who spoke frankly about leadership, change and promoting equal opportunities.

So much has changed since 2013, when the first history of women in the diplomatic service, ‘Women of the World, The Rise of the Female Diplomat’, was published to critical acclaim. The pioneering book shone a light on the obscure workings of the diplomatic corps and the protracted struggles of women to gain a foothold in this traditionally male preserve. Just the second published work by academic Helen McCarthy, the cross-over book went on to win the International Affairs Book of the Year prize in the Paddy Power Political Book Awards 2015.

“I think it’s good that Boris Johnson is making it a priority,” says McCarthy, who is reader in history at Queen Mary University in East London. “And the principle of equal opportunities as well as the values of gender diversity are now fully enshrined at the level of institutional policy. Of course, it’s not just about saying what you stand for; it’s also about doing it. But those statistics suggest that they are walking the walk, as well as talking the talk. It is just that you have to be ever vigilant to sustain that commitment.”

McCarthy was inspired to research the topic when she encountered three diplomats in succession during a “wonderfully self-indulgent” scholarship year at Harvard’s Kennedy School of Government. She discovered that women were not admitted to the UK’s diplomatic service until 1946 – nearly 21 years later than the home civil service.

“This just really intrigued me,” she says. “I thought: ‘What is so different about the diplomatic service? What is so special about representing the nation overseas that means it was deemed inappropriate to allow women in? That was the initial puzzle that drew me in.”

The resulting history spans 135 years of women’s presence in the diplomatic service as wives, explorers, liaison officers, temporary attaches; and, after the gender bar was lifted in 1946, it tracks their arrival as junior officers and their slow progress up the diplomatic ranks.

It chronicles in painstaking detail the resistance put up by the Foreign Office to demands for change from women activists and the impact of “regulation number five”, which required women to retire from the service when they got married, on the careers of pioneering women diplomats. The marriage bar was finally abolished in 1973.

After the Foreign Office successfully beat off demands from women’s groups for access to diplomatic work in the wake of World War I, a Civil Service Commission eventually set up an inter-departmental committee on the admission of women in 1933 to examine the issue and take written and oral evidence.

The vast majority of respondents in overseas missions were strongly opposed to employing female diplomats, with epithets ranging from “unsuitable and highly inadvisable” in China and “deplorable” in Norway, to “disastrous” in Yugoslavia, and “unthinkable and even criminal” in Brazil.
The committee took testimony from prominent women including American-born MP and socialite Nancy Astor; Edith Lyttleton, a former British delegate to the League of Nations; and Board of Trade principal Alix Kilroy. Written submissions from women working overseas were organised by unions and university appointments boards.

It finally recommended that the diplomatic service make a small number of female appointments as an “experimental measure”, and review the outcome to determine whether to proceed with full admission of women. Its report, which was completed in 1934, was shelved by the Foreign Office until 1936, when the government decided to make no change at all.

From the committee’s deliberations on gender and diplomacy, which form the centrepiece of the book, McCarthy ranges back as far as 1878 to paint a colourful picture of the aristocratic, refined and opulent social world of Europe’s embassies in the 19th century and women’s place within it as ambassadors’ wives.

She chronicles the daring adventures of women who gained temporary positions with the military or diplomatic service during WWI, including distinguished polyglot, traveller and archaeologist Gertrude Bell. The intrepid Bell eventually won the title of ‘oriental secretary’ in the Indian army for her political, propaganda and liaison work across the Middle East.

But it was the events of World War II that were the primary causal factor in the decision to finally admit women to the diplomatic service in 1946, McCarthy says. “If you look at the position after the committee in 1935, it’s absolutely clear that the status quo is safe. But a decade later they are admitting women. So you have to ask: ‘What happens between those dates?’ and clearly it’s the war that does it.

“I think the key is that most of the Foreign Office objections in the 1930s were hypothetical. They were all based on [saying]: ‘It’s too risky, this is what might happen if we do this’. But by 1946, feminists can point to concrete examples where the wartime state sent women overseas to quasi-diplomatic and temporary diplomatic posts, and it was fine. That completely transforms the terms of the debate.”

McCarthy points to a number of high-profile women who proved successful in diplomatic roles during the war. “In the Middle East, Freya Stark, who is another expert orientalist, is extremely effective in Yemen, Cairo and Iraq. And then you also have Nancy Lambton, who is a Persian scholar and is extremely effective in Tehran. Other wartime examples are in North America, where various women are sent over to New York and Washington to help bring America into the war and try to win over American public opinion.”

The election in 1945 of a Labour government that favoured the democratisation of diplomacy as well as the broader participation of women in the war economy also played a part. “The wartime rhetoric of equal sacrifice really does help to make those feminist demands more powerful and compelling,” she says.

McCarthy had to employ oral history methods to reveal the trajectory of the pioneering women who joined the service from 1946 onwards for the final section of the book. “A lot of male diplomats have written memoirs or kept diaries, which they subsequently published, but virtually no female diplomats did,” she says. “So I interviewed them. I tracked down about 20 women and wrote to them, and most of them wrote back and wanted to be interviewed.

“They were all in their 70s and 80s and I visited them all over the country,” she says. “Some of them were in cottages in Hampshire, and some were in Oxford or Suffolk. Some of them took me for lunch and others gave me cups of tea. To be sitting in their presence and just recording their memories and their stories was a huge privilege. A few of them have died since, which makes it feel all the more precious.”

On the whole, women pioneers such as Anne Warburton, the UK’s first female ambassador, who was accredited to Denmark in 1976, did not see themselves as role models seeking to beat a path that other women could follow, McCarthy says. Instead, their primary interest was to pursue the career they wanted and achieve professional success.

The book traces the impact on those careers of two further informal barriers to female employees’ promotion. Women were barred from in-house training in “hard languages” such as Arabic or Chinese on the grounds that the educational investment would be wasted when they left the service to marry. And they were not posted to challenging locations, due to fears that they would be unable to cope or that social attitudes would impede vital diplomatic work.

Gradually, however, the list of “safe” posts considered suitable for women widened, with female ambassadors posted to Sri Lanka in 1974, India in 1975, Uruguay in 1980 and China in 1983. Despite the wartime achievements of Gertrude Bell and Freya Stark, the Middle East was the last region to fall, after Arabic language training was finally opened to female officers in the early 1980s.

McCarthy’s pick for the most high-flying female diplomat of the late 20th century is Pauline Neville-Jones, whose string of prestigious posts includes European Commissioner, chair of the Joint Intelligence Committee, and political director (second only to the permanent secretary within the FCO hierarchy). In the latter role, Neville-Jones led the British negotiating team at the Dayton peace talks, which ended the three-year Bosnian War in 1995.

“In terms of impact and influence and being someone who had some institutional power and wielded it, she would be the stand-out figure,” she says. “It’s true to say that most of the women did not rise as fast or as high as their male peers.”

McCarthy maintains that useful lessons can be drawn from the sometimes agonising history of women’s entry into the diplomatic service for professional practice today. “I think it is very important to be aware of the long history of exclusion and delayed inclusion for understanding why women have been under-represented and why the FCO does continue to lag behind home civil service departments in terms of its gender diversity,” she says.

The enduring power of these traditions and of the diplomat’s image as a “highly-educated, privileged, white man”, underlines the continuing need to challenge stereotypes as well as change policies, says McCarthy. “It’s not just about things like have an FCO crèche and family-friendly policies,” she says. “It’s also about challenging that broader cultural dynamic.”

This article first appeared on the Global Government Forum's website on 23 August 2017.

Helen McCarthy is Reader in Modern British History at Queen Mary University of London. She is a historian of modern Britain with broad research interests. Her first book, The British People and the League of Nations, was a study of internationalism in Britain in the 1920s and 30s. Her second book, Women of the World: The Rise of the Female Diplomat (Bloomsbury, 2014) is the first serious attempt to explore the place of women in British diplomatic life since the 19th century, tracing their influence and experiences as wives, patrons, experts and eventually as diplomats in their own right.