The North remembers: why Conservatives still get a frosty reception

As the Conservative Party meets for its annual conference, David Jeffrey assesses the party's difficulties in winning seats in the North. 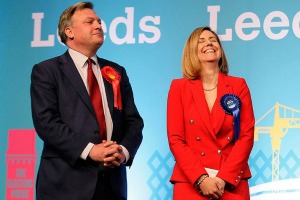 The 2015 general election saw David Cameron become the first Prime Minister since 1895 to increase the Conservative vote and seat share after serving a full term.

However, despite some prominent victories - such as Andrea Jenkyns in Morley and Outwood and Chris Green in Bolton West - Cameron was unsuccessful in addressing, let alone reversing, the Conservative’s significant ‘northern problem’.  Why?

If we take the North of England to be congruent with the North East, the North West, and Yorkshire and the Humber we can see, in the table below, the scale of the Conservative’s northern problem.

Nationally, the Conservatives won 50.8 per cent of the seats in the last general election whilst in Northern England they managed to win just 27.8 per cent.

The Conservative’s northern problem has long been commented upon, both within the media and academia (e.g. see Randall 2009 or ‘Access All Areas (pdf)’ from Renewal).

Cameron’s modernisation programme was designed to rehabilitate the Conservative image across the country, and during the last parliament and there was much talk of the Conservatives attempting to appeal to northern voters directly with Osborne’s metro-mayors and Northern Powerhouse policies.

Incidentally, Osborne was the only member of the original 2015 cabinet with a seat in the North (SPERI, 2015).

The idea here is that, with the right policy offering, the Conservatives can win back northern voters.

Another element of the Northern problem was the image and background of key Conservatives, especially Cameron and Osborne who were often decried as ‘toffs’.

Nadine Dorries - a Conservative MP not known for mincing her words - was quoted as saying “I think that not only are Cameron and Osborne two posh boys who don't know the price of milk, but they are two arrogant posh boys who show no remorse, no contrition, and no passion to want to understand the lives of others".

Northern voters tend to agree; research by Kellner (2013) found that voters in the North are more likely than their southern counterparts to consider the Prime Minister out of touch and lacking clear principles.

However, the importance  of these two arguments is brought into question by recent polling data.

The graph below shows the Conservative vote share across the UK and Northern England.

The general election figures are taken from the House of Commons Library (Research Paper 10/36 (pdf) and Briefing Paper CBP7186) whilst the polling figures are taken from YouGov. (The numbers used are headline voting intentions, which are weighted by likelihood to vote and excludes those who would not vote or don't know.)

Firstly, if policies like metro mayors or the Northern Powerhouse had appealed to northern voters, we would expect a boost in northern Conservative vote share between the 2010 and 2015 general elections.

Similarly, if Conservative fortunes in the North were lacking because of Cameron and Osborne, we would expect a boost in Conservative support following Cameron’s resignation and May’s ascension as Prime Minister (which was followed with a very public slap down of Osborne).

However, there has been no real boost beyond the margin of error - Conservative vote share in the north lingers around 31 per cent, between 7 and 10 points behind the UK as a whole. 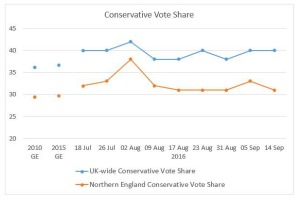 Unfortunately for May, the Conservative Party’s problem runs deeper than policy or perceptions of individuals.

Kellner shows class, living standards and ideology are not to blame; the Northern England is not so different from the rest of the country to explain such large differences.

Instead, it is the party brand itself which is the biggest drag on northern Tory voting.

Kellner’s analysis found the largest gap between Northern and Southern voters (and the highest response in terms of percentages), was on the view that “Conservatives care more about the rich and affluent than ordinary people”.

62% of Southern voters felt this, compared to 73% of Northern voters.

This brand problem can be traced back to the Thatcher premiership, where northern economies and councils were hit hardest by the decline in manufacturing and council budgets.

In many areas of the north, being anti-Conservative/anti-Thatcher is seen as a badge of honour, and even tied up in local identities (a prime example being Liverpool, where you could stick a blue rosette on John Lennon and it’d be highly unlikely he’d be sent to the Commons as one of Liverpool’s five MPs).

Whilst metro mayors may appeal to the heads of northern voters, and the Northern Powerhouse to their wallets, the Conservatives are failing to appeal to their hearts.

This is the vital missing link which May must address in order to close the polling gap between the North of England and the rest of the UK.

David Jeffrey is writing his PhD on the causes of Conservative electoral decline in Liverpool from 1945 onwards at the School of Politics and International Relations at Queen Mary University of London.

A shorter version of this article appeared in The Conversation.