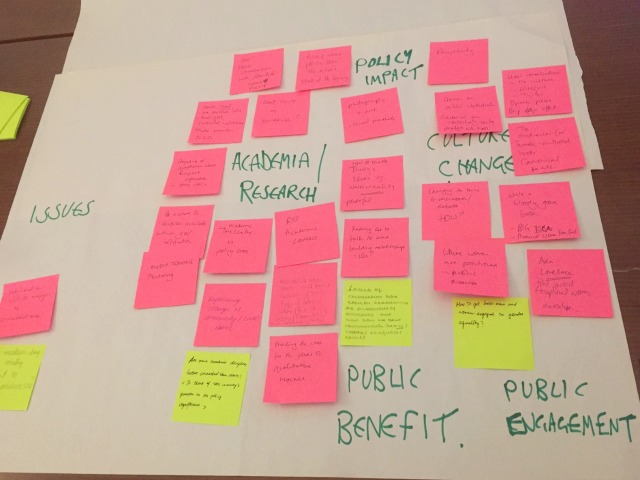 Yet the relentless focus on measurable outcomes inevitably sweeps those on the receiving end of policy decisions into undifferentiated aggregate groups.

It flattens out an individual’s passions, eccentricities, fears and desires, and renders invisible her ‘subjectivity’ – that her sense of herself as a subject, thinking, feeling and acting in the world.

Subjectivity is fundamental to our humanity, but it so often gets lost in the dry language of policy debates.

There are few areas where understanding subjective experience could be more important for the policymaker.

And yet the researchers who specialise in producing exactly this kind of knowledge often struggle to make their voices heard when competing with the ‘hard’ evidence of graphs and tables.

Finally, the event served as the launch of the Working Mothers Project website, the culmination of my own collaboration with the photographer Leonora Saunders.

Combining semi-structured life interviews with documentary photography and photo-diaries, the project provides an intimate portrait of the interconnected work and family lives of five mothers in East London.

This kind of research is time-consuming and expensive, it can be emotionally draining, and it requires experience and skill to do well.

The evidence it produces is not ‘soft’ data, but it is, inevitably, of a different nature from research explicitly designed to solve well-defined public policy problems.

It was in the 1970s that feminists first argued for the authority of personal experience and placed women’s everyday struggles to achieve full human flourishing at the centre of their politics.

This lesson is as relevant today as it ever was. It is arguably even more so, as both activists and researchers increasingly recognise the importance of understanding men’s subjective experiences alongside those of women for the success of any policy initiative aimed at advancing gender equality in our society.

To illustrate this point, one might consider the report on the Gender Pay Gap produced earlier this year by the Parliamentary Women and Equalities Select Committee, based on extensive evidence received from a range of organisations and experts.

This long and detailed document identified a significant weakness in the existing research base in relation to Shared Parental Leave (SPL), a policy introduced in 2015 but which has seen only limited take-up amongst eligible couples. The Committee noted:

Whilst financial incentives, and deterrents, can influence couple’s decisions about who takes parental leave, the evidence also points to cultural factors hindering the take-up of SPL amongst men. The question of how families make decisions about caring came up on several occasions during the inquiry.

This evidence should subsequently inform how government seeks to support parents ‘in considering the long-term implications of their decisions around the time they take parental leave.’

There would seem no better opportunity to place research on subjectivity at the heart of policy debates around gender, work and care.