Sovereignty, Brexit and the Reason Britain Joined in the First Place

Vote Leave’s slogan ‘Take Back Control’ makes British sovereignty, and its recovery, the foremost reason for an out vote in the EU referendum. At the Mile End Institute's Great Sovereignty Debate Dr James Ellison suggested that the history of Britain, Europe and sovereignty should make Vote Leave more cautious about their claims of fortune from freedom. 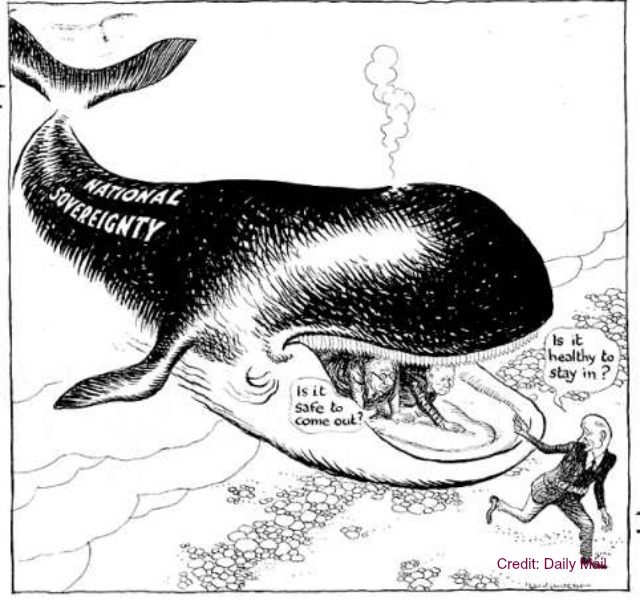 In his devout defence of British sovereignty and his call for its retrieval from the undemocratic European Union, Boris Johnson has talked a lot of bananas recently.

When he launched Vote Leave’s battlebus in Cornwall last month, he called 24 June 2016, the day after the historic referendum, ‘Independence day for Britain’.

To make his point, he said it was ‘absolutely crazy’ that the EU can tell the British people ‘what shape our bananas have got to be’.

It does not matter that Boris’s bananas point is a myth. The fact is that it plays well to an audience who swallow the line that Britain needs to ‘take back control’ without wondering why it gave up some control in the first place, or why that might still be necessary.

To understand why British governments and parliaments decided to cede some sovereignty in order to join the forerunner of the EU, we must look back to the history of European unity after 1945 and the UK’s response to it.

Unification was seen as a solution to the ills of nationalism which had brought the Second World War.

In the early stages of integration, organisations called on member states of new institutions to give up no national power.

That meant that the British were as comfortable with the evolution of Europe as they ever would be only until May 1949.

It was then that the Council of Europe was founded, an intergovernmental organisation which Winston Churchill claimed to be the first step towards a United States of Europe.

Others, particularly the French, believed that only supranational bodies could achieve such an historic goal and thus ideas of federal unity soon emerged.

When Foreign Secretary Ernest Bevin learned of French dissatisfaction with the Council of Europe’s intergovernmentalism in 1949 and their enthusiasm for new supranational institutions, he felt the need to say something.

In November 1949 Bevin warned his American and French opposite numbers of the ‘danger to [their] common policy if … the United Kingdom electorate were forced to choose between association with the Commonwealth and with Western Europe’.

Bevin added ‘that the United Kingdom – because of its overseas connections – could never become an entirely European country’.

Bevin hadn’t uttered the word ‘sovereignty’ but it was there. Britain’s freedom to maintain its overseas connections, specifically its trade with the Commonwealth – which accounted for around 50 per cent of the total – without sharing their economic advantages with any other nation or group of nations was the expression of its sovereignty.

The word was uttered within six months.

On 9 May 1950 the French upped the ante in the Schuman Plan for a Franco-German federal organisation for coal and steel which was soon widened to other European countries.

Two days after receiving the plan, the Foreign Office told Bevin that ‘if the United Kingdom is required to join or if economic factors prevent our staying out, British participation is likely to involve us in Europe beyond the point of no return’.

The Schuman Plan’s proposed High Authority – the forerunner of the European Commission – was too much for the Labour Cabinet and Britain rejected membership for a combination of reasons, but central to them was not going beyond the point of no return.

Holding out for a half-way house

It was also central to the British response to the Treaties of Rome of 25 March 1957 which took the model of the Schuman Plan, and extended it to all sectors of the economy to create the European Economic Community and the ambition of ‘ever closer union’.

While all the economic indicators, and political pressures, pointed Britain towards the necessity of gaining access to the Community’s markets from 1957, the supranational elements of this new economic experiment made it impossible for the British to contemplate joining.

This was a constitutional, even elemental, point for the doubters, and also a problem for the pragmatists who believed that Britain would have to come to terms with the Community.

The reason for that is the threat posed by the EEC to Britain’s sovereignty was linked directly with its economic prosperity and growth.

Membership of the EEC would mean acceptance of its common external tariff and this would in turn mean that Britain would have to share its preferential Commonwealth trade with the Community, as well as make difficult adjustments to its agricultural industries.

To a Conservative Cabinet unready to countenance such economic and political revolutions, membership was impossible.

Thus a half-way house was proposed to the EEC: Britain would, along with other European nations, form a Free Trade Area in industrial goods alone around the core of the EEC.

Crucially, the FTA would be an intergovernmental institution that would require no loss of national sovereignty.

Britain would be able to access the Community’s markets, maintain its preferential Commonwealth trade and not pay a price in sovereignty. Britain would have – as George Osborne says it could have now if it votes to remain in the EU – the best of both worlds.

In 1958, the Community rejected the Free Trade Area for the very reason that the British wanted it. It would have given the British the benefits of access to the market without paying a price.

Paying the price – in sovereignty – was impossible because the party, parliamentary and popular reactions to the idea of Britain giving up sovereignty over two foundations of its economy, way of life and sense of national identity was thought to be too much to handle. Until four years later in 1961, that is.

By 1961, Britain’s Commonwealth trade was declining, decolonisation was the dominant path for the colonies, European Community trade was growing, West German exports had outstripped British exports for the first time since the interwar period, and the Americans told the British that there was no alternative for them but EEC membership.

These facts convinced the Conservative Prime Minister Harold Macmillan to lead his Cabinet and then parliament to the idea of seeking membership of the EEC, and indigestible prospect for those attached to British sovereignty for a spectrum of reasons.

For his Cabinet, those related principally to the maintenance of Commonwealth relations but there was also the unreadiness of a British public to whom the EEC was mostly an unknown.

It was for these reasons that the application of 1961 was not unfettered but in fact conditional.

The motion in parliament was for the government to seek negotiations without commitment to the loss of sovereignty, unless accepted by the House of Commons after full consultation with the Commonwealth.

The negotiations with the Community from 1961 to 1963 proved many things – principally that France was more important to Europe than Britain – and also that a conditional application was impractical.

To access the EEC, Britain would have to pay a price, or two prices, in trade with the Commonwealth, and in national sovereignty.

The failure of the first EEC application in 1963 contributed to the subsequent pursuit of an independent future for Britain in a revived Commonwealth under the Labour government of Harold Wilson after its election in 1964.

For Wilson, Britain’s borders were on the Himalayas. However, long-run structural weaknesses in the British economy and international events soon led Wilson to realise that Britain’s borders actually had to be on the Rhine.

By 1966, domestic and international economics – sterling crises, the failure of the National Plan, and the success of the Kennedy Round trade negotiations – and international affairs – mainly the corrosive effect of the Vietnam war on UK-US relations – brought an unnatural European, Harold Wilson, to the logic of a second EEC application.

In that process, sovereignty remained a critical issue, but ultimately, attachment to it was considered out of date.

That was because of the falling of alternatives (‘NAFTA’, a North Atlantic Free Trade Area, and ‘GITA’, or going it alone) and hard facts about trade patterns and political power.

Britain’s historic transition from a nation with a global presence to one with an ambition to retain global influence brought even the doubters to acceptance of a second UK application to join the EEC in 1967.

There were two other factors at work in that decision: first, the idea that Britain would be able to negotiate better to protect sovereignty as a member state; and secondly, that there was more sovereignty to be lost by remaining outside of the EEC in a world in which interdependence had made sovereignty less absolute.

The history of Britain’s path from the rejection of loss of sovereignty to a federal European institution in the 1940s to recognition of there being no alternative in the 1960s presents us with a number of reflections for the current referendum.

The story of the majority acceptance – however enthusiastic or reluctant or somewhere in between – of Cabinets, parliament and eventually the public of the need to give up sovereignty in order to benefit economically and politically from EEC membership was part of a greater history of Britain’s twentieth-century transition from global power status to medium-power status.

Those developments were part of the global historical forces of the twentieth century which made attachment to sovereignty increasingly unrealistic.

The development of international institutions, interdependence, globalisation and the dominance of superpowers, especially after 1945, rendered sovereignty for medium-sized powers no longer inviolable.

Those forces did not, and have not, led to universal acceptance among the British people of the logic that convinced the doubters in the Labour Cabinet of April 1967: there was no alternative to the EEC. The advice given to ministers about going it alone was that outside of the European Community, ‘in form we might be more free, but it would be a freedom to submit to disagreeable necessities’.’

Now, the European Union is more discredited as an institution than the Community was in the 1960s and 1970s, and the British economic position is stronger.

Yet the other historic forces that largely shaped the international economic and political environment point to the sustained logic of that April 1967 advice.

Which leaves us with a fascinating historical question which is if that is the case – and preponderant economic opinion in this referendum campaign suggests that it is – why does Vote Leave have such traction? Why does ‘Take back control’ and sovereignty have such power?

To answer those questions, we have to return to the history of Britain and Europe.

The overriding fact is that the British have never been comfortable Europeans. To a country which defines itself much by its independent past, and which largely accepted European integration because there was no alternative, sovereign, route to national renewal, there has remained national bipolarity over membership of Europe.

That bipolarity was not put to rest by entry, by the 1975 referendum or by the relative prosperity and peace that Europe has enjoyed since 1945 partly because of the evolution of the EU. It is unlikely to be put to rest on 23 June.