Sovereignty, Brexit and Power: Lessons from 1975

Following the Mile End Institute's Great Sovereignty Debate, Dr Robert Saunders reflects on the role the issue of sovereignty has played in the campaigns in 1975 and today. 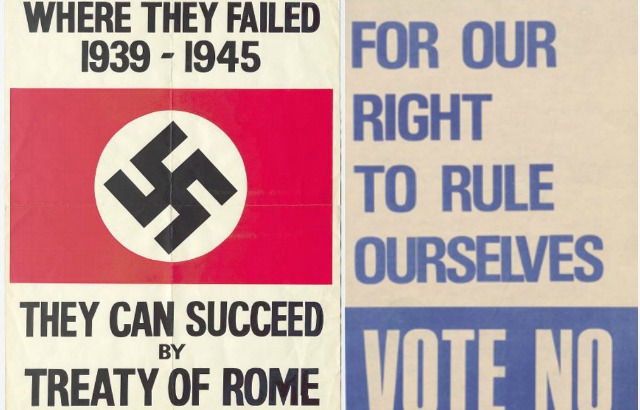 One of the most evocative slogans of the current referendum campaign is the appeal to "Take Back Control".

Speaking at the Sky News debate last week, Michael Gove chanted the mantra like a witch-doctor performing an incantation, to the point that twitter exploded with mock anxiety when he went four minutes without uttering the words.

The Remain campaign has largely ceded the issue, suggesting that the loss of sovereignty is either trivial or a reasonable trade-off for economic prosperity.

This was not the case in previous European debates and marks a risky strategy today.

In so far as it suggests "power to the people", the desire for sovereignty is a progressive impulse. But there has been surprisingly little discussion of what "sovereignty" means, or how we exercise it in the modern world.

We have something to learn here from the previous referendum debate in 1975. At the centre of the argument then was a collision between different visions of sovereignty, both of which are still relevant today.

The slogan 'The Right to Rule Ourselves' was blazoned across their literature, while a pamphlet sent to every household in the country proclaimed that 'The fundamental question is whether or not we remain free to rule ourselves in our own way'.

Neil Marten, who chaired the 'Out' campaign, told journalists that 'While food and jobs are vitally important, the real issue is whether we vote away our political birthright ... There is no other issue'.

This was sovereignty in its classical sense, defined by Enoch Powell as 'the right to live under no laws but those made by our own representatives; to pay no taxes but those imposed by our own Parliament, and to be governed by no government but that responsible to our own people'.

It was an understanding of sovereignty that would have been familiar 100 years earlier, but was fortified by two more recent currents of thinking.

One was "social" or "economic" democracy, an ideology with special resonance for the left.

For someone like Peter Shore, the Secretary of State for Trade, the historic purpose of the Labour Party was the slow subjection of market forces to the democratic control of the people.

By lifting trade policy out of the hands of Parliament, membership of the EEC struck a blow at the whole mission of labour politics.

At the party's Special Conference in 1975, Michael Foot rebuked Roy Jenkins for declaring that 'I cannot regard the preservation of national sovereignty as the ark of the covenant of socialism'.

Sovereignty, Foot proclaimed, meant democracy, and 'the preservation of democracy' was indeed 'the ark of the Socialist covenant'.

This view also drew on the memory of decolonisation, which celebrated the creation of sovereign nation states out of the wreckage of the European empires.

Voters were urged to make the referendum 'Britain's independence day', while Tony Benn likened the Common Agricultural Policy to the tea duties that had sparked the American Revolution.

As the Labour Antis put it, 'Britain dismantled a vast empire in the belief that no country has the right or wisdom to govern another. Now we demand for ourselves what we freely conceded to the Commonwealth'.

All this posed a powerful challenge to the pro-Marketeers. So how did they respond?

Some actively welcomed the dilution of national sovereignty.

One of the most resonant posters of the campaign reminded voters that 'Forty million people died in two European wars this century. Better to lose a little national sovereignty than a son or daughter'.

Barbara Jackson, the popular religious broadcaster, called sovereignty a 'blasphemous' principle, which had 'wiped out the flower of Europe's youth after 1914'.

Like so many of his generation, Ted Heath had seen combat in Europe and returned determined to build a different world. He told a debate at the Oxford Union that 'I am entirely prepared to make a contribution of national sovereignty to the building of peace in Europe'.

More commonly, however, they argued that sovereignty had changed; that the model of sovereignty prized by Benn and Powell no longer existed.

Back in the sixteenth century, it was possible to declare by Act of Parliament that 'no foreign prince, person, prelate or potentate hath ... jurisdiction ... within this realm'.

What that meant was the Pope, the French and the Spanish; so as long as a government could uphold the Protestant religion and fortify the English Channel, England was sovereign.

The challenges of the twentieth century were very different: two nuclear superpowers, who could blow the world to pieces; colossal levels of public debt, built up in two world wars; an economy that was uniquely dependent on imported food; and giant, multinational companies that could move production in an instant from Dagenham to Detroit.

Short of imposing a siege economy, these challenges could not be defied by Act of Parliament. Instead, governments across the world had created a network of transnational institutions, such as NATO, the International Monetary Fund and the World Trade Federation. In each case, states traded autonomy for power.

As a member of NATO, Britain accepted American military bases on its soil, put British troops under foreign command and committed itself to go to war under certain conditions.

In return, it gained the power to defend itself, which it could no longer do alone. If the defining characteristic of a state is the monopoly of legitimate violence, NATO alone marked a constitutional revolution.

On this argument, sovereignty is like freedom: it is meaningless without power. I am not free to have dinner at the Ritz, if I cannot pay the bill.

Governments are not sovereign over taxation, if the rich can move their money offshore. This posed a different understanding of 'self-determination', as the ability to make meaningful decisions over one's own destiny.

In a famous lecture in 1974, Roy Hattersley argued that sovereignty had been draining away from Westminster for decades: not because of the European Community, but because of the realities of the modern world.

In the 1960s, the Labour Government had published a 'National Plan' for economic growth. It had been ripped up by the currency markets and the devaluation of sterling. Governments had made spending commitments to their voters, which were then struck out of the budget by Britain's creditors at the IMF. Ted Heath had passed an Industrial Relations Act that he was simply unable to enforce, while parliamentary government had collapsed altogether in Northern Ireland.

From this perspective, the idea that Britain could regain its national sovereignty, simply by leaving the EEC, was an 'illusion'.

The word was Margaret Thatcher's, who warned that leaving the Community would diminish Britain's control over its future.

Winston Churchill (grandson of the prime minister) told voters that it was 'imperative that the British people should regain the sovereignty that they have lost and regain control over their future destiny. We have not gone into Europe in order to lose our sovereignty but to regain and enhance it'.

Both these visions of sovereignty pose a challenge to our own referendum debate.

On the one hand, the constraints on national sovereignty are probably more potent today than they were forty years ago.

Anyone who cares about democracy should be troubled by the way in which the EU makes decisions. Yet here, too, we risk loading onto "Europe" the failings of our own democratic institutions.

We live in a world in which trade policies in China close steelworks in South Wales; in which large corporations like Google and Amazon regard taxation as entirely voluntary; and where even the United States has to negotiate with Apple over its surveillance policies.

Climate change threatens global economic disruption, posing a challenge to which the policies of national governments are simply irrelevant.

In this context, the argument that we 'take back control' simply by leaving the EU is entirely fantastical.

The danger is that our obsession with the European issue becomes a way of not thinking seriously about sovereignty in the modern world.

The democratic vision of Benn and Powell, too, is as powerful today as it was forty years ago.

Anyone who cares about democracy should be troubled by the way in which the EU makes decisions.

Yet here, too, we risk loading onto "Europe" the failings of our own democratic institutions.

Less than two weeks from the most important vote of our lifetimes, more than six million people are not on the electoral register. Of those that are, around 1 in 3 will stay at home.

We have an electoral system that hands an absolute majority in Parliament - and all the powers of the Executive - to a party with just 37% of the vote, while the disproportionality of votes to seats has become almost comic.

In 2015, 180,000 voters in Northern Ireland returned 8 MPs from the DUP - the same number elected by 2.5 million Liberal Democrats. More than 4 million people voted UKIP, returning just one Member of Parliament. That's four million votes, simply ripped up and flushed down the toilet.

The legal fiction that "the people" can kick out their rulers is becoming dangerously strained.

Within the Commons itself, levels of scrutiny are now so poor that we rely on an unelected second chamber to hold the Executive to account.

The governing party is under investigation for electoral malpractice, while the official Opposition is engulfed in an internal constitutional crisis.

Our newspapers - the respiratory system of democracy - are owned by a small number of exceptionally rich men, whose media empires have engaged in phone hacking, intimidation and corruption of police offers.

As the Leveson Inquiry revealed, this is not simply the standard dishonesty of the tabloid press; it's criminality on an industrial scale.

None of this excuses the democratic deficiencies of the EU - though membership provides some checks and balances that our dysfunctional institutions now lack. But it suggests that the EU has become a scapegoat for democratic failings closer to home.

Democracy and self-government are noble ambitions, which should be at the core of this referendum debate; but we are doomed to disappointment if we look to Brexit for a magic solution.