Parliament’s brief dalliance with the people

Professor Charles Turner, runner up in the Hennessy Prize for essay writing on British politics, argues the referendum result leaves the executive hamstrung. 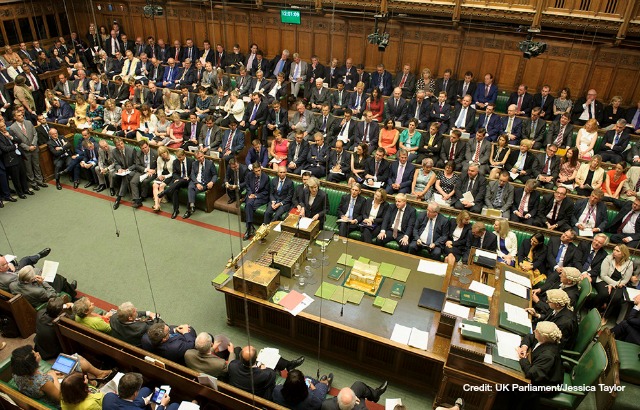 Before the Brexit referendum, some Remain campaigners invoked a lazy metaphor that a vote to leave the European Union would be suicide.

In turn, some Leave campaigners compared it to encouraging the UK to jump from a ship heading for an iceberg—despite the fact that this image is associated by many with a British manufacturing triumph leaving Europe for America but not making it, with many of its passengers surviving only briefly before perishing in a freezing ocean.

The UK may not have committed suicide or even shot itself in the foot; instead, it has been wounded internally.

The referendum took a major constitutional matter out of the hands of a centuries-old parliament, referred it to a people whose composition is shifting rapidly, and then passed it on to an executive whose tenure of office is temporary.

That executive, its officials, and those of the EU, will negotiate the terms of Britain’s exit.

Since the Lisbon Treaty makes no provision for any resulting deal to be ratified by the member state that wishes to leave, the prospect arises that a diminution in the rights of UK citizens—for example, the number of countries in which they can live and work freely may fall from 28 to one—may occur without an act of parliament.

Rousseau thought that to be free, citizens in a republic had to be able to see themselves as the authors of its laws.

For this to be possible sovereignty should lie with the people; that didn’t mean that they should be responsible for day-to-day legislation but that they should determine the state’s most general legal framework.

The government, by contrast, should make policy, and any magistrate who sought to do more than that and determine the character of the state he served, was a usurper and a tyrant.

That was a utopian view even then, and in large and complex societies we generally accept that the people cannot act as a single body, and that if we are to be saved from the magistrate’s ambitions it is by representative institutions, by constitutions, and by the courts that uphold them.

our unwritten constitution, or the one set down in different places, is at once an arcane mystery, a moveable feast, and something that we all implicitly appreciate without having to understand

This hasn’t always worked: the failures of those institutions has kept the rhetoric of “the people one and united” alive, and the modern state’s concentration of resources has fostered the ambitions of rulers who want to change the rules.

The German political theorist Carl Schmitt saw sovereignty in all modern states in these terms: sovereign is the one who decides when the constitution applies.

In the 20th Century, dictatorships often combined Rousseau’s populism and Schmitt’s exceptionalism, arbitrary rule being justified as the will of the people. Parliaments were thus crushed from above and below.

Luck aside, we like to think that in Britain we have been spared what continental Europe suffered because we are a settled people; our unwritten constitution, or the one set down in different places, is at once an arcane mystery, a moveable feast, and something that we all implicitly appreciate without having to understand.

We are a constitutional monarchy and a parliamentary democracy; our MPs are not delegates serving sectoral interests, they are representatives, serving the national interest by exercising their individual judgement.

They are trusted to do so because of the bond between members and all their constituents.

Our political system, so the argument runs, is an enduring achievement, a balance between direct and indirect democracy.

There are flies in this ointment, to be sure: the first-past-the-post electoral system produces Commons majorities on a minority of the popular vote, and cabinet government has evolved to the point where policy announcements are leaked to the media before they are scrutinized by parliament.

One of the biggest flies has been the EU, since according to one argument it undermines our sovereignty, our ability to see ourselves as governed by laws that we ourselves, or our own legislators, have made.

After four decades of equivocation, opt-outs, but also increasing legal entanglement, the UK decided to establish once and for all whether to continue membership.

As it happened, the winning party had promised that the matter would be put to a national referendum.  Later that year the House of Commons voted by a majority of six to one to do so.

It was the first of many ironies and paradoxes.

Suspicion towards referendums has often been a conservative Eurosceptic position; Margaret Thatcher called them the tool of demagogues.

“Brexit means Brexit” provided neither the clarity of a definition nor the comfort of a tautology, more the sound of the child who repeats the same word or phrase and thereby makes the word, and the world, strange

Yet in those parts of Europe where they are used frequently they are more often a means of consultation on specific legislative proposals than a gauge of the current public mood. Parliament, the sovereign legislative body of the UK, not always au fait with the things they do differently across the channel, supported one for the latter purpose.

Accordingly it had to suspend itself, but in so doing it failed to specify either the legal status of the result, or when parliament would once again take up the reins.

When the result, “Leave,” was declared, two questions that the campaign’s hot air had kept aloft came in to land: Who should determine what follows from the vote? And what does the result mean anyway?

The second question has been answered by saying “Brexit means Brexit,” but this provided neither the clarity of a definition nor the comfort of a tautology, more the sound of the child who repeats the same word or phrase and thereby makes the word, and the world, strange.

When there is a binary choice “Leave” is unambiguous; in international treaties bound by complex legal rules, it cannot be.

There are many ways of being outside a political union, each of them involving different degrees of proximity and influence.

And no political union worth the candle will make it easy for one of its members to leave. Once this was realized, the first question asserted itself.

At this point parliament might have recalled its responsibilities and acted as one bipartisan sovereign body, either to treat the result as too close to warrant a modification of the constitutional fabric or in order to shape an abstract “Leave” into a set of concrete scenarios and proposals.

As it was, members remained true to one of the first-past-the-post system’s virtues, the bond between member and constituency, and to one of its vices, the concern of members in marginal constituencies (who in a proportional system might be high on the party list and thereby guaranteed a long political career) to hang on to their vulnerable seats.

For while, according to most estimates, three quarters of members were, by conviction or considered judgement, remainers, when they looked at the electoral map and saw that a majority in their constituency had voted to leave, they gulped.

Deluged with letters from remain voters, their replies were a variation on “the people have decided.”.

Only they haven’t. The process of leaving the EU cannot begin until the member state that wishes to leave informs the EU of its intention “in accordance with its constitutional requirements,” surely an invitation to national reflection on where the moment of UK sovereignty resided after the vote.

The complaint might be that the silence of MPs has shifted sovereignty’s centre of gravity to the prime minister exercising the controversial yet constitutionally legitimate crown prerogative.

The reality is even less palatable: should parliament stay silent, the fate of future generations of UK citizens will lie not in the hands of the executive alone, but in theirs and those of negotiators, many of them imported because Britain lacks its own, some appointed by the EU.

The terms in which the British “take back control” will be determined for them. As one of football’s Mrs Malaprops, England manager Bobby Robson, once put it: “we’ve reached the quarter-final, fait accompli.”

Emile Durkheim said that suicide is not an act in which a person detaches himself from society, but one in which he communicates the fact that he has already done so.

Perhaps indeed the referendum result was confirmation that culturally Britain has been moving away from Europe for the last four decades even as its legal entanglement with the EU has increased; divided between those who stay at home and those whose horizons extend beyond Europe, how far into the world’s oceans will it drift?

That question may now be beyond us: parliament’s brief dalliance with the people has left them exhausted and it impotent, and wondering at the future conduct of their offspring, a hamstrung magistrate.