This is a transcript of Professor Margaret Macmillan's remarks at the Mile End Institute's event, Does Good Policy-Making Need Historians? at the British Academy. 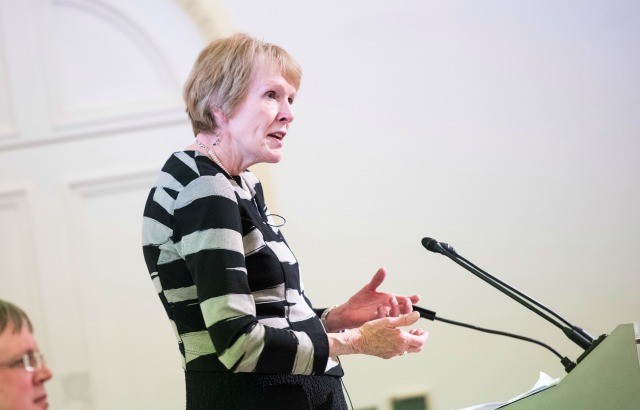 And I think that sort of understanding of the past is enormously important and I think it’s very important that there should be people who carry out developing that understanding the past in the best way possible. So I’d like almost to change the title from ‘Does good policy making need good…need historians?’ to ‘Does good policy making need good history, and good historians?’ and I do think this is very important because you will notice that policy makers often call on history, they call on it to validate what they want to do often of course in appalling ways. You have only to think of the breakup of Yugoslavia and how all sides called on history to justify what they were doing to their neighbours, you have only I think to think of the ways in which George Bush Junior justified, in my view, the wrong and incredibly wasteful invasion and occupation of Iraq by saying ‘history will judge me’, history will judge that I did the right thing…I’m behaving like Truman and Churchill, a comparison which their spirits may not have fully appreciated.

So I think history is dangerous, all the more reason that we should understand it, all the more reason that…part of education that I couldn't agree with David Cannadine and Peter Hennessey more, that any citizens education should be a good understanding of history. Not just the facts, not just the dates I mean that was what used to kill history when I was young, when we had to memories dates but the historical process, the questions, the looking at the evidence, the scepticism which good historical training inculcates. When you look at a statement and you say well, who’s making it? why are they making it? do we have any corroborative evidence, do we any evidence that counters this particular statement, this particular policy, this particular interpretation of an event, and so I think history if it is done properly, will help to develop those sort of instincts…

Canadians are very fond of saying…we say a lot about ourselves, mostly that we're nice, kind, peace loving people who are very generous, very gentle, have never done anything awful to anyone. Well you know there’s a whole history in Canada on how we’ve dealt with aboriginal peoples, and there’s a whole history in Canada on how we dealt with various waves of immigrants which isn’t always an attractive history and I think we need to know that as well in case we get too an inflated sense of just how good we are. And when people say in Canada we're such a peacekeeping, peace loving people and then go off to a hockey game there is a cognitive dissidence I think.

But I think what history also does is give you the background to current decisions that have to be made and I think one of the things that is really worrying at the moment is that the record, and I think this is something we’re all worried about, the record is simply not being kept in the same way and its partly because of Wikileaks, partly because of the ease of transmission of electronic communication means that people don’t want to commit themselves in any way that can be rapidly reproduced and can be disseminated and apparently the German government is now going back to typewriters and paper copies for certain very, very key documents because there is...they can be scanned in by someone and disseminated just as easily.

But what that means is that when policymakers face crises which may be similar to crises in the past they won’t know why they made those decisions in the past. I’d just like to give one example of this which is one that should concern us all, we're facing at the moment an economic - potentially economic crisis - the international economic system looks a bit shaky there is again problems with banking, problems with regulation the Greek banks look very much on the edge of possibly collapsing and there are other banks that are under real stress. If we faced another crisis as we faced in 2008 we won’t have much memory of why policymakers did what they did then.

I talked to someone in Washington who had been involved in those desperate negations when they were trying as they thought in the Fall of 2008 to really save the whole banking system and the whole financial system not just of the US but of a much wider world from going belly up, and they made very quick decisions as it turned out they made at least enough of the right decisions to prevent that from happening they have no record of why they made those decisions and what their thinking was. What they did according to the man I talked to, they would meet in long hallways outside the formal meetings, they’d discuss things very freely then go into the meetings and simply record the decision they made, and he said you know even two years later I didn’t know why we'd made a particular decision and that I think is dangerous. Because if you don’t know why you’ve made a decision in the first place, if you can't go back and say why did we do that?, what was our thinking then? You’re really reinventing it all again and sometimes you don’t have time, in a moment of crisis you simply don't have time to do it. And so I think it is very important to have a sense of the issues, to have a sense of those you’re dealing with, to have a sense of yourself I think it informs good policy, it won’t prevent you necessarily from making mistakes but it might limit the sort of mistakes you might make.

What I think history can also do, and this is very important, is encourage you to ask questions, I don’t think history repeats itself I think as Peter (Hennessey) said Mark Twain I think got it right that history occasionally rhymes. And I think when it rhymes it may give us a clue to the sorts of questions we should be asking and just to give a very simple example, If the British and American governments had asked themselves or asked the historians who could have told them ‘will Iraq welcome foreign invaders’ they could have learnt very, very quickly that Iraq has a long tradition of not liking foreign invaders they could have looked at what happened when the British tried to establish a mandate in Iraq as soon as they did they faced a wide scale revolt in the early 1920s, that could have prevented some of the ludicrous assumptions that were made about how all Iraqi people were just waiting for foreigners to come in and tell them what to do. And I think it’s very telling that as things began to go very badly in Iraq a lot of the top military people sent for copies of the Seven Pillars of Wisdom by T.E. Lawrence. Now I don’t think it would have helped them very much but I think they were desperate, they were looking for some sort of information about what it was they were dealing with, the people they were dealing with, who were these people and crucially what were the people in Iraq remembering, because unless you know what they're remembering you won’t be able to see how they're going to behave in certain circumstances.

What we do wrong as historians I think is not to take ourselves seriously enough I think we’ve lost confidence I think we're slightly intimidated by the political scientists who produce wonderful things with graphs, wonderful things that look scientific which if you examine them more closely are not scientific at all. I’ve read a lot of International Relations theory lately and when you look at some of the case studies on which theories are erected, they’re case studies that historians would not regard as really being valid and the First World War is always being used, the outbreak of the First World War is always being used by International Relations theorists we as historians know it's a very complex event, we know that it can’t be treated as an exact example of anything in particular because there are too many causes and too many factors at play.

What is interesting I think is that policy makers in some way sense this, foreign policy makers in the US did a survey about two years ago of who it is foreign policy makers like to go to for help in thinking about foreign policy issues - they go to historians, first, top of the list was historians, pretty much up at the top of the list was regional specialists people who knew the languages and cultures, politics and history of the regions they're dealing with. Very far down the list were International Relations theorists, I felt a slight sense of pleasure at this I must confess. We have not I think always helped ourselves, I think we have been intimidated by the political theorists and we haven’t helped ourselves also I think by too often turning inwards.

There's been an inward turning in the historical profession where at least for the past could of decades a lot of us have become very interested in what we as historians do and so you get a great many works on how historians created the Middle Ages, or how historians created the story of Rome all of which is interesting but I don’t think it’s the main thing we should be doing and when I see doctoral students who want to look at the creation of a particular bit of the past I want to send them to the archives, I want to say get in there, look at the documents really try and understand what happened in the past before you then begin to reflect on it. I once put a black mark on an application which said I want to study this particular area of history because it is seriously under theorised.

Any rate, I think what history can do I think we need to reach out more and we try and persuade people to listen to us, some do listen to us the people who do listen to us interestingly enough are the military because the stakes are so high and I think they can’t afford to make mistakes and they have a respect for history which I think political leaders often don't and what I think is also worrying is what David (Cannadine) and Peter both said about education because we're getting generations of people who don't have a good education in history and I think that’s something we want in our leaders. In the end what we also want is political decision makers who understand enough of the past, who understand that very clever and very powerful people in the past often got it completely wrong. What history can do and I think we want this in our policy makers is inculcate a very neated sense of humility, you can’t solve everything and you don’t have power to do everything. Thanks.

This is a transcript of Professor MacMillan's talk at the Mile End Institute event "Does Good Policy-Making Need Historians?".