Lessons from the 1975 business campaign

At the Mile End Institute conference, Britain and Europe: The Lessons from History, Neil Rollings, Professor of Economic and Business History at the University of Glasgow, assessed the extent of change in business attitudes towards the EU since 1975. 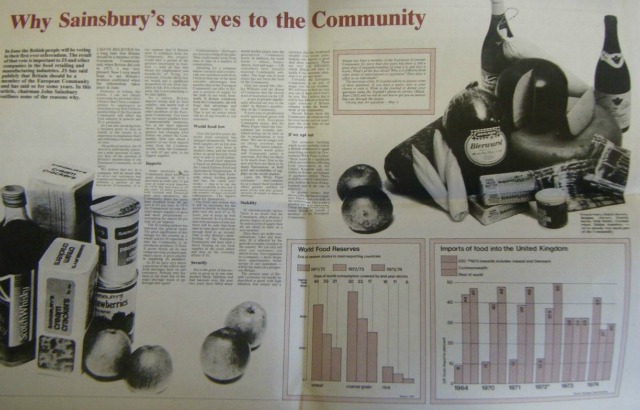 In the 1975 EEC referendum, the position of business was unequivocally in favour of a ‘Yes’ vote.

Surveys by the Economist, the Times and the Confederation of British Industry (CBI) all showed an extraordinarily high degree of support for continued membership amongst business leaders and their companies, with only a handful of companies being against membership, let alone campaigning against staying in.

The key business actors in the ‘Yes’ campaign were the CBI and large companies.

The CBI, the undisputed ‘voice of industry’ since its creation in 1965, published reports and adverts in favour of continued membership, as well as launching a campaign to raise £50,000 to fund such activities.

However, the organisation was worried that it should not adopt too high a profile in support of EEC membership, preferring to operate behind-the-scenes by providing companies with information, debating points and posters.

These were supplied from a specially created European Operations Room to designated individuals in over 800 companies, known as ‘Mr. Europe’s’.

This allowed the CBI to direct the campaign while enabling companies to front many of the campaign activities.

The vast majority of British companies were happy to oblige in whatever way they could.

Fundraising for Britain in Europe was led by business people and 363 companies gave more than £100 each to the organisation.

Forty-three donated over £10,000, contrasting with only seven donations over £100 from any source (only one was a company) to the National Referendum Campaign, which was leading the ‘No’ campaign.

These figures relate to the official campaign period and some companies had already given large sums to the ‘Yes’ side before this.

The resulting difference in financial resources available between the ‘Yes’ and ‘No’ campaigns was enormous and patently visible at the time.

Companies did more than just provide funding: staff were seconded to the Britain in Europe campaign, company magazines were used to promote the EEC, adverts were taken out and company chairmen of major British companies wrote directly to their employees.

They made clear that a ‘No’ vote would threaten their jobs, not just from European competition but also because companies would move production to the continent.

Tesco even put the slogan ‘Yes to Europe’ on their carrier bags.

All of this contrasts with the situation today.

The Chief Executive of Tesco has recently announced that the company will maintain a neutral position in the referendum, reflecting the diverse views of its shareholders.

Nor is Tesco alone. Its position reflects a wider ambivalence within business, resulting from a number of changes since 1975.

There are concerns, particularly among small businesses, that the EU imposes an additional bureaucratic burden and regulatory hindrances, whereas in the 1970s attention tended to focus on the removal of trade barriers.

Secondly, small businesses now have their own voice.

In 1975 the CBI did have a Smaller Firms Council but its voice rather got lost, with much greater attention paid to the pronouncements of the major firms which were often regarded as Britain’s national champions.

Today the views of small business are taken more seriously and they have their own organisation, the Federation of Small Businesses (FSB), to represent them.

Given that small businesses have tended to be more localised in their operations, they have inevitably tended to be less positive about European integration as access to other markets is likely to be less important to them than to big business.

Thirdly, with the FSB, the Institute of Directors and the British Chambers of Commerce all speaking for their memberships, the CBI is no longer the single voice of British business: the field is much more congested and contested.

A specific campaign vehicle, Business for Britain, has been created to put the case for pulling out of the EU and, as shown by the protests at the recent CBI conference, Eurosceptics are happy to attack the CBI because of its pro-EU position.

A further reason for this battle to be seen to speak for business is the greater importance attached to business in society today compared with 1975.

There may have been criticism of Stuart Rose’s appointment as chair of the Britain Stronger in Europe campaign but successful business people like Rose and Richard Branson, who recently appeared on The Andrew Marr Show to argue for staying in the EU, are now celebrities whose endorsements are seen to matter.

That was inconceivable back in 1975 where celebrity endorsements came from sports personalities and television stars, not from business people.

However, while business is more ambivalent about the EU than it was in 1975 it is easy to exaggerate the extent of this

Multiple surveys by the various representative bodies of business may not be as positive about European integration as those taken in 1975 but in each of the major surveys the largest group of respondents has been in favour of continued membership, even among small businesses.

For example, the British Chamber of Commerce’s survey of its membership in September 2015 found over 60 per cent in favour of staying in, though many wanted to see the terms of any re-negotiation before confirming this.

Also, one reason for the public attacks on the CBI is precisely because it remains the most widely recognised and acknowledged voice of business, even if it is not as pre-eminent as it was in 1975.

The particular circumstances in 1975 were also critical to why business was so extraordinarily in favour of continued membership at that time.

Belief in Britain’s economic decline was widespread, along with the perception of growing trade union militancy and fears that state intervention in business affairs was inexorably rising. With rampant inflation there was a mood of impending crisis.

As the leading CBI official in the campaign told the CBI Council, which was its peak decision-making body, the referendum was not just about Europe but ‘whether the militants or the moderates won the battle’.

In addition, even in 1975 there were some concerns within the CBI as to how the EEC might develop.

One CBI Council member fully endorsed the CBI’s commitment to staying in but was ‘concerned about the Community’s bureaucracy and the costs to industry’.

In other words, the underlying concerns of business then were not as different as might appear on first sight.

In particular, much of businesses’ support in 1975 for staying in was not driven by some absolute commitment to European integration. Rather it was based on the relative position of being out or in.

Given Britain's perceived problems in the 1970s, it was believed that staying in the EEC offered a way to change Britain for the better.

Today those relativities look very different, given the economic problems on the continent and the relatively strong performance of the British economy.

In that very different context it is unsurprising that support for staying in the EU is less strong than it was in 1975.

The lack of certainty and clarity over what that alternative scenario would look like for business is likely to be a key consideration in its thinking.

Whether that will ultimately translate into active endorsement of continued membership by many companies, as happened in 1975, is less certain, and helps explain Stuart Rose’s recent letter to 3,000 directors of FTSE 350 companies urging them to come out in active support for continued membership.

How far they will respond with money and public campaigning in support for continued EU membership will only become clear in the coming months.

Neil Rollings is Professor of Economic and Business History at the University of Glasgow. This article is based on his contribution to The Mile End Institute conference, Britain and Europe: The Lessons from History, which was funded by UK in a Changing Europe.