The Mile End Institute held a discussion on 9 February to mark the publication of The British General Election of 2015 by Philip Cowley and Dennis Kavanagh.  Here Spencer Livermore, Visiting Fellow at QMUL's School of Politics and International Relations and Director of Labour's 2015 campaign, reflects on the election. 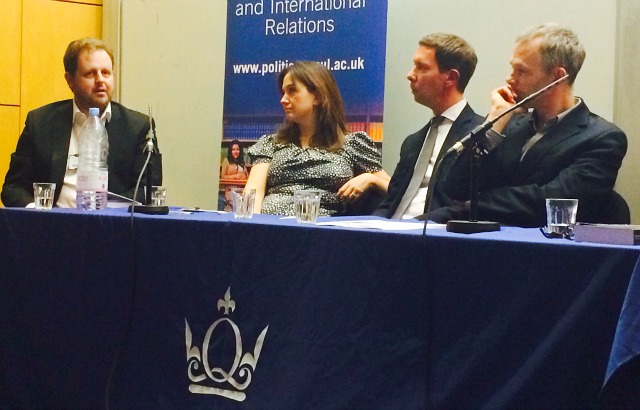 The first relates to the question of whether or not campaigns matter in determining the outcome of elections.

It’s a debate I’ve always been interested in, and clearly sometimes campaigns do matter: 2005 is probably the most recent example of a campaign that affected the outcome, and before that probably 1992.

But I genuinely don’t think that the 2015 campaign had any material impact on the outcome.

Labour didn’t lose the election in the six weeks of the campaign – indeed many commentators at the time concluded that Labour had the best of most of the campaign. This election was lost in 2010 or 2011, when Labour failed to make the necessary and tough decisions to make them electorally viable.

And I think this is increasingly the case: the electorate form a view on leaders and parties in the first months and years of a parliament, and if the wrong decisions are taken then, it is almost impossible to correct them later.

Much credit has been given to Lynton Crosby for winning the election for the Conservatives, but actually the real architect of their victory was George Osborne.

Much like Gordon Brown ahead of the 2001 election, Osborne consistently framed the election from 2010 onwards around the economy and the deficit.

He laid traps for Labour and even when they were clearly signposted, Labour obligingly walked into them.

The Beckett Report has rightly been criticised for making many excuses – from the media, to the polls, to the fact that the Tories outspent Labour.

But the fact is that elections are determined by three fundamental issues: economic credibility; the relevance of your offer to voters’ concerns; and the ability of your leader to be seen as a potential Prime Minister.

In 2015 Labour was in the wrong place on each of those issues.

We hadn’t taken the tough decisions to regain economic credibility. What we had to say was far too narrow in its appeal. And Ed Miliband unfortunately consistently lagged behind David Cameron in terms of who would make the best Prime Minister.

I do, however, continue to take the unfashionable view that elections are won or lost on decisions not on personalities.

I believe that Ed could have won in 2015 if he had taken different decisions – particularly on the economy and welfare.

The accepted wisdom is that in 2015, Labour had the wrong strategy to win the election.

But my experience is not that the strategy was wrong but that it was absent.

None of the elements that I would associate with strategy were present in the run up to 2015.

I think what we had was not a strategy but a credo. It was an ideological project built on a mistaken assumption that the country had shifted to the left.

Much has been written about a 35 per cent strategy, as if we had an identified part of the electorate we wanted to pursue.

The reality was very different. Labour’s vote – 30 per cent as it turned out – was simply the number of people who were interested in the agenda that ideology dictated we talk about.

So in conclusion, the question for Labour now is how they respond to each of these three issues.

Are decisions being taken early in the Parliament that set us on course for election victory, or are mistakes being made that cannot later be undone?

Have we moved forward on economic credibility, the relevance of our offer, and on leadership, or are we further away on the fundamentals than we were even in 2015?

And do we have a strategic attempt to win power, or simply an ideology that must be pursued even if that is at the cost of election defeat?