Back in 1975, when Harold Wilson’s Labour government wanted to persuade voters of the merits of staying in the European Economic Community (EEC), they sent out a pamphlet – Britain’s New Deal in Europe – to every household. Lindsay Aqui says that historical precedent does not bode well for the Government's 2016 campaign. 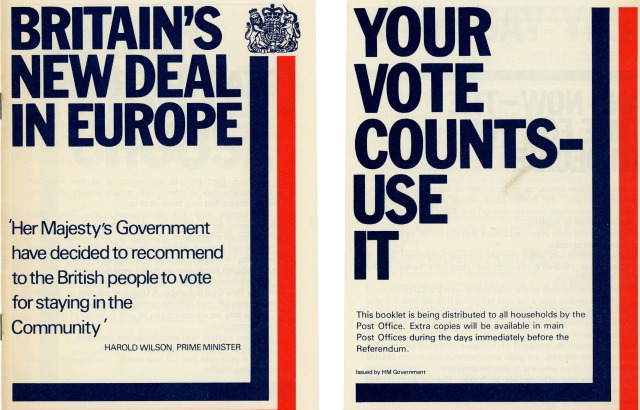 My ongoing research has found that the 1975 pamphlet cost £2m, in nominal terms, to print and distribute.

Its messages bear some resemblance to the arguments being used by the current government of David Cameron, in a leaflet arguing why the UK should remain in the EU.

The 2016 pamphlet has become the subject of recent criticism. Not only has it cost £9.3m to produce, it remains questionable whether anyone will read it, or be persuaded by its arguments.

Though Wilson’s government won the referendum, with 67% voting to stay in, it may not have been thanks to the leaflet. Cameron’s government should not rely on their pamphlet making the case for remaining in the EU.

The main arguments presented in the 2016 pamphlet focus on why remaining in the EU will mean “a stronger economy”, “improving our lives”, and “controlling immigration and securing our borders”.

The government points out that the EU is the UK’s biggest trading partner, and that a vote to leave would risk higher prices and lower standards of living.

Wilson also highlighted the economic benefits of membership, focusing on “food”, “money and jobs”. In particular, he argued that the renegotiation achieved a more flexible Common Agricultural Policy, beneficial to “both housewives and farmers in Britain”.

Both prime ministers chose to use their pamphlets to highlight the instability that would be caused by a vote to leave Europe.

The suggestion that this is a “once in a generation decision” perhaps ignores the fact that for some, this will be the second time they have voted on this crucial question

Cameron’s government makes clear that such a decision would result in an “economic shock” and “ten years or more of uncertainty”.

Wilson spoke in similar terms about a “period of uncertainty” and the “risk of making unemployment and inflation worse”.

It may be that the characterisation of the 1975 outcome as “an unenthusiastic vote for the status quo” was a result of this kind of negative argument.

The focus on immigration in the current pamphlet marks a clear shift in the British debate about Europe.

Back in 1975, the EEC of only nine member states simply did not have to cope with the vast movements of people that is characteristic of present-day Europe.

But since the 2002 enlargement of the EU, which the UK supported, the Tory party has altered its stance on the EU’s enlargement policy.

The suggestion that this is a “once in a generation decision” perhaps ignores the fact that for some, this will be the second time they have voted on this crucial question. Yet, the statement highlights a similarity between the domestic political context of 1975 and today.

It makes clear Cameron’s hope that the vote will settle the ongoing debate about Britain’s place in Europe, not least because of the divisions it has caused for his own party.

Wilson’s belief, explained in his memoirs, that the outcome of the 1975 referendum “settled 14 years of national arguments”, marked a similar kind of wishful thinking.

No influence on decisions

Two surveys conducted immediately after the 1975 referendum are revealing about the British public’s relationship with the campaigns.

Analysis of the data collected as part of the British Election Study revealed that only 43% of its 2,117 randomly selected respondents read the government’s pamphlet.

Britain in Europe, the organisation campaigning for a vote to remain in the EEC, produced a pamphlet read by 56.5% of respondents, while the National Referendum Campaign’s pamphlet, which explained the case against maintaining membership, was read by 59.6% of respondents.

A comparison of engagement with the campaign literature and people’s feelings about whether they made the best decision for Britain in 1975, reveals that the pamphlets may have had little impact on people’s confidence in their vote.

Analysis of the results of a LSE study showed that only 12% of people who voted yes in 1975 felt the government had “a great deal of influence” on their decision; 51.3% reported “little” or “no” government influence.

A stronger relationship is found between the timing of voters’ decisions and the certainty of voting correctly. Of people who reported they were “very sure” they voted correctly, 67.2% reported that they decided how they would vote “long ago”; 79.3% of people who were “not very sure” decided only a “little before” the referendum.

What does this mean for the government’s efforts to persuade the public to stay in the EU today? It appears that in 1975, voters were more likely to feel confident with their decision if they decided how they would vote long before the referendum.

Engaging with the campaign literature, or with the government in general, does not seem to have had any particular bearing on voting outcomes, or on people’s certainty that they made the best choice for Britain’s relationship with Europe.

If the current government truly wants the vote in June to be a “once in a generation decision”, it may need more than an information pamphlet to ensure the public is confident in their choice.

Lindsay Aqui is a PhD candidate in the Schools of History and Politics & IR at Queen Mary University of London.

This article was first published in The Conversation.

Read more on the EU referendum in our publication: