This is a transcript of Professor David Cannadine's remarks at the Mile End Institute's event, Does Good Policy-Making Need Historians? at the British Academy 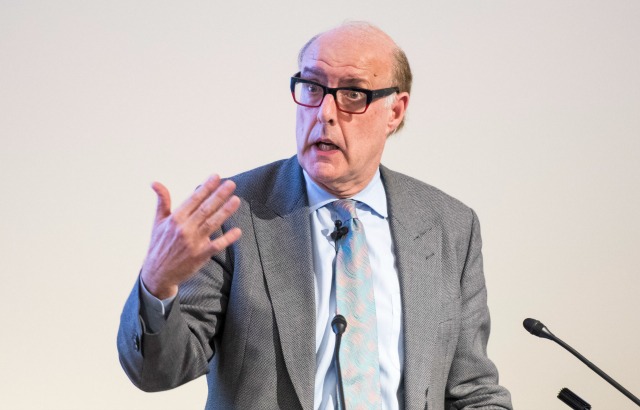 I want to talk about my own two attempts to offer a historical perspectives on policy-making, one of which was an enormous success, the other of which, was a total fiasco.

But my starting point is a line that I give to my Princeton undergraduates, which is, first of all, that history “is all about respect for evidence” – that’s one of the ways in which grown people ought to live their lives.

Secondly, that one of the reasons why history is hugely important is that it offers the best possible antidote to the geographical parochialism which supposes that the only place is here, and to the temporal parochialism, which supposes that the only time is now, and what history is about is getting us out of that geographical and temporal self-obsession.

It was these things about perspective and proportion, and respect for evidence, which I tried as it were, to develop and to promote in these two adventures of mine in the corridors of power.

The first of these is between 2007 and 2010. I was on a committee chaired by Paul Dacre, the other member was Joe Pilling former Permanent Secretary of Northern Ireland, set up by Gordon Brown to consider whether the 30-year rule, that’s to say to point of which most but not all official documents became publicly available, which was established by Harold Wilson in 1966 – whether in the light of freedom of information, or a whole variety of other developments, this rule was still sensible or whether we ought to consider bringing the number of years down from 30 to a smaller figure.

I wrote that report, because nobody else seemed either willing or able to do it. I have to say it seems to be an extremely well written and well-structured report.  It’s rather short of Cannadine adjectives and so on, it probably makes it better. In any event, we recommended that it should be brought down from 30 years to 15 years, which is in the process of happening now.

So that was one of my adventures into the world of Whitehall.

The second adventure was that between 2009 and 2011, I ran a research project funding by John Sainsbury of the Linbury Trust to investigate the history and the contemporary circumstances on the teaching of history in English schools.

This was set up at the time when Michael Gove was getting very exercised about that, he has of course moved on since, but that was what he was doing at the time.

There was a constant amount of noise, especially in the tabloids, that nobody knew any history anymore and that there had been a golden age earlier on where they knew a lot more, and that things were in a hopeless state, and it all needed fixing and sorting.

So I ran a research project, for effectively three years, in which two very accomplished historians Jenny Keating and Nicola Sheldon did an enormous amount of work on the ‘history of history as a taught subject’ in English schools across the 20th Century.

We concluded it was not the case that history was in a bad way now; we concluded that had been the case about the teaching of history in every decade from the 1900 onwards and there was nothing new about saying that.

We also concluded that in so far there was some truth in the argument that people did not know as much history as ideally they ought to, it wasn’t because the teaching was bad, it wasn’t because the curriculum was wrong, it was because history in Britain uniquely amongst most Western European countries was only compulsory in schools up to 14 and only 2 hours a week if you was lucky, and there were serious limits to what you could possibly teach given those time constraints.

So we recommended, the two major recommendations of the book The Right Kind of History that came out of that were, first, that history ought to be made compulsory up to 16, as that would increase the amount of time available to teach it, and, secondly, that was the big issue and there was no need whatsoever to start tinkering with the national curriculum, because actually that was fine, all that was needed was more time to teach.

Those were my two adventures into Whitehall.  Both of them I think did demonstrate a great deal of respect for evidence.

When we did the 30-year rule reports we pulled, and had evidence from politicians, from civil servants, from historians, from the broader public.

I also sorted both of those reports to provide, in conformity to what I say to most of my students in Princeton, some degree of perspective and proportion.

In the case of the 30-year report we gave a historical account on how the policy of the thirty years came into being since the construction of the public record office in Chancery Lane in the early 1850s, and when this issue first became important.

We also looked at the practices of other countries, especially in recent times, to try and get a broader perspective.

We did essentially the same when we published The Right Kind of History; a massively well-documented account of the teaching of history in schools in England across the 20th century, with some serious comparisons with practices in other countries in the Western world.

So in both cases it seemed to me, and indeed it seemed to other people too, perhaps their verdicts are to be taken notice of since, unlike me, they had written these things, that the cases we advanced were both very strong.

The case we made for bringing the availability and accessibility of documents down from 30 years to 15 years was I think a good one, 15 years was a bit arbitrary, but we were very satisfied that it seemed about right.

The evidence we advanced in The Right Kind of History for the real problem being that history wasn’t taught until 16 and that everything else was subordinate to that, was also very well laid.

So, I must repeat that those two encounters with the world of policy-making, embodied in my view, an enormous amount of respect for evidence and brought to bear on these complicated issues a sense of perspective and proportion.

But the outcomes were very different.

The 30-year rule, the findings were accepted and just before the General Election of 2010, the necessary provisions to make the changes required in order to bring down the time when things were available from 30 years to 15 years, was just carried in the wash-up legislation that was passed before parliament was dissolved. It just made it with about two days to spare.

In the case of The Right Kind of History, the recommendations were not only ignored but were completely contradicted, despite many conversations that I had with Michael Gove, that I don’t think he much enjoyed, and I didn't much enjoy either.

What Michael Gove did was exactly the opposite, he actually refused to make history compulsory till the age of 16 and instead, he decided he wanted to change the national curriculum.

So he did precisely the opposite to what had seemed to me and to others the overwhelming majority of evidence had suggested actually what ought to be done.

So given that it seems to me that both of these enterprises of mine embodied the same methodology, and in my view the appropriate and admirable methodology, why was it that the outcomes were different?

And what does this imply about any claims we might want to make or have about the capacity of historians to realistically influence policy?

One could argue that the 30-year rule was an official enquiry set about by the Prime Minister, which had a Whitehall legitimacy to it, and therefore there was a greater likelihood it was going to be accepted.

Whereas, in comparison, The Right Kind of History and the project I did for John Sainsbury was an essentially unofficial enterprise, so what purpose did it really have?

There may be some truth in that, I suppose beyond that it seems to me that the broader conclusions I would draw would be the following: first, politicians actually don’t live in an evidence-based world in the way that we believe we do, or we believe all decent people ought to do.

I found that (and how naive was I to think that they did) but I was certainly disabused of that pretty roundly by the time I had spent my time with Michael Gove.

Secondly, I concluded that cogency of argument of itself often based on evidence doesn’t necessarily get you anywhere either, although we are all taught to believe that if we all spent our time teaching people at undergraduates, evidence, cogency of argument, this is what you need to know in the great world – well it turns of you don’t need to know any of those things at all! or indeed you want to believe that they’re all wrong.

It may be that cogency of argument and eloquence of expression – which I would like to think the two things I wrote certainly had, profits you nothing if you do not have the political clout to make something happen.

This seems to be the largest conclusion I drew and lesson I learned from my encounters in Whitehall; the reason we got the 30-year rule changed to 15 years with a wash-up legislation was that Paul Dacre, editor of the Daily Mail, who knows where “all the bodies are buried,” twisted arms and called in favours and we got our clauses about this particular measure tacked on to the wash-up legislation. It was Paul, in the end, that made it happen,

Whereas in the case of the right kind of history, we had no such clout and nothing happened at all; Michael Gove just said, 'Hello Professor Cannadine, it was all terribly interesting but I’m not going to take this through'.

There was nothing I could do or anyone else I could call on to, as it were, change that outcome.

So it seems to me that while, we would like think, and I would like to claim, that historians can contribute potentially a good deal to policy-making and they can certainly write the kind of things I did, which are cogent, eloquent and evidence-based with perspective and proportion, that is no guarantee it will have any effect.

The process whereby, in my case, once but not twice, things do have an effect, I’m afraid has absolutely nothing to do with how good or cogent the evidence is.

I think the evidence I advanced in both cases was good and cogent but, in the end, we got the 30-year rule changed because Dacre could twist arms, and we couldn’t change anything through The Right Kind of History because there was no one who could do the same thing.

So we come back to the point I think in the end that historians as a tribe are actually absolutely hopeless at lobbying in Whitehall.

We all like to think that we want to be engaged with policy, it sort of excites us all and gives us a kind of thrill that we are doing something real.

But actually the capacity to significantly influence policy is very limited, and compared with the Royal Society opposite, we are hopeless, absolutely hopeless at lobbying government in an organised way.

So, as Peter [Hennessy] often says to me, (in a manner I don’t find completely reassuring) “my generation has been completely hopeless at all this things, we’ve not been any good.”

So the challenge for you, is to do much better than we did, and I do hope you do.