A union in need of a moral vision 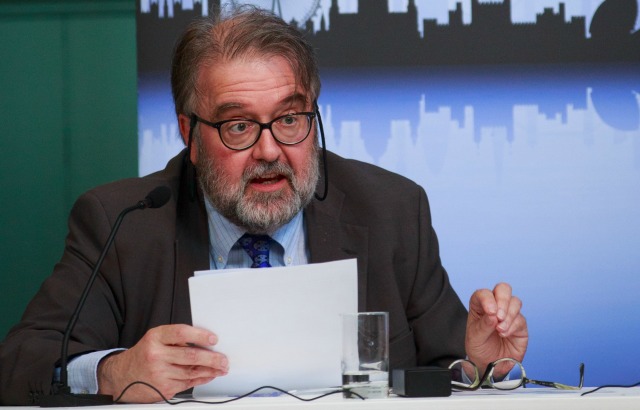 Sovereignty we are told, is about ‘choice’.  ‘Choice’ is the mantra of our age and generally treated as an unproblematic ‘good’.

Such an attitude is naïve in that it avoids asking a crucial question – which is what is sovereignty for?

The Founding Fathers of what became the European Union were not naïve men, and the ‘ever closer union’ they sought was not an end in itself, but a means to greater ends.

Greater economic prosperity was the means toward the end of providing a better life for the people of Europe, to help them realize their potential as children of God.

That the debate in this country about the EU is operating at the low level it is is profoundly dispiriting. It is a Philistine affair if we take Wilde’s definition of a Philistine as one who knows the cost of everything and the value of nothing.

What is lacking from this debate is any sense of those shared values which made the EU something more than a market to those who founded it.

Man does not live by bread alone, and the absence from this debate of any statements about the values for which the EU stands says something both about the what the EU has developed, and about our society.

The Founding Fathers of the EU were men whose values went well beyond the utilitarian considerations of market economics.

Their vision was profoundly influenced by their Catholic Faith – De Gasperi (whose canonization is being considered in Rome), Jean Monnet, Konrad Ardenauer and Robert Schuman were all inspired by the Catholic social teaching set out in Pope Leo XIII’s 1891 Encyclical, Rerum Novarum.

Speaking out against the excesses of what we would not call free-market capitalism, Pope Leo spoke to a higher vision of man’s purpose and the good life, which included not only protection for workers, proper holidays, decent pay and conditions, but also reflections on government.

In a Europe still dominated by Empires, Leo pointed up the importance of subsidiarity – the principle that policies are best enacted at the most local level, and if a smaller structure (such as a national legislature) can perform a function, it should perform it instead of a larger one.

Had the European Union stuck to that founding vision, it is unlikely we should be having either this debate – or the referendum which has prompted it.

Because the UK lacks this tradition of Catholic social teaching, and perhaps because, like many modern politicians, Boris Johnson lacks religious literacy, he described the references to it in the Maastricht Treaty as ‘subtly turning European federalism into a semi-religious crusade’, with ‘some kind of peculiar new Euro-spirituality inspired by Brussels – as the answer to the Community's spiritual crisis.’

Would that it had been. But this was precisely the point at which, as the debate about the failed EU Constitution underlined, the organization moved away from talking about the values of the Christian identity celebrated by its Founders.

While De Gasperi opposed Mussolini’s statism and proposed European integration based on cooperation, not on domination by a small elite of bureaucrats, today’s EU has moved in the opposite direction.

As a recent Theos report has put it the EU needs to ‘discover a soul’, and return to the values espoused by its Founders: ‘What was once a cohesive identity and ideology based on particular moral concerns has been hollowed out and allowed itself to be replaced by the economic consensus.’

This is part of a wider trend in Western civilization, noted by Alasdair MacIntyre in his 1981 study, After Virtue: A Study in Moral Theory.

He commented that the language of morality now amounts to little more than a collection of verbal remains – husks from which the kernels of coherent moral beliefs have long since been removed:

‘What we possess … are the fragments of a conceptual scheme, parts which now lack those contexts from which their significance derived. We possess indeed simulacra of morality; we continue to use many of the key expressions. But we have – very largely, if not entirely – lost our comprehension, both theoretical and practical, of morality.’

In what Benedict XVI described as a ‘dictatorship of relativism’, it seems the most we can do is to ‘transpose the traditional issues of morality into the vocabulary of a barren utilitarianism.’

Sovereignty is a means to an end, but since the EU, like our Western civilization as a whole, is no longer comfortable talking about the Christian values which underlay the moral vision of its Founders, it trades in mere words – now husks from which much of the content has been removed – which is one reason the campaign in the UK sounds as though it is an advertising campaign addressed to personal material interests.

As Professor John Loughlin has pointed out many of the problems with the EU ‘derive from the failure of moral vision of today's elites.’

The ‘Remain’ camp offers no deeper or wider understanding of what it means to be a European, because our elites have none.

John Charmley is Professor of Modern History, University of East Anglia and was one of the speakers at the Great Sovereignty Debate held by the Mile End Institute on 6 June 2016.